The 1000-run feat of young Indian cricketer has been put in perspective with revelations he was playing against a team that was three years younger than him and with boundaries of only 27 metres.

Pranav Dhanawade, 15, scored an unbeaten 1,009 runs in a school cricket tournament to become the first batsman to score 1,000 runs in an innings in any form of cricket.

But the Times India has reported that Dhanawade was playing against a second string opposition team, whose players were 12-years-old and who had never played cricket with a hard ball before.

The legside boundary was only 27 metres long as well, which helped Dhanawade to hit 59 sixes and 129 fours. 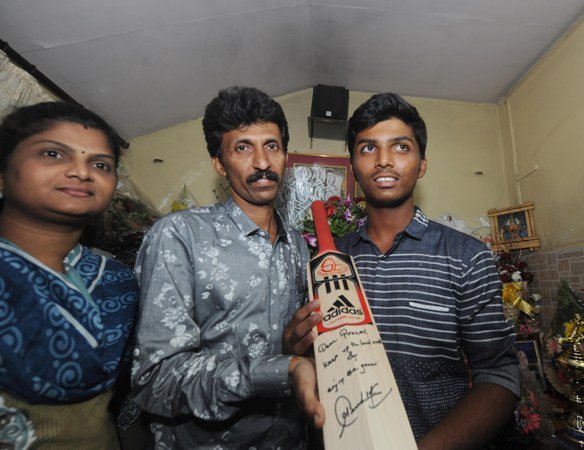 Pranav Dhanawade with his parents and the bat Sachin Tendulkar sent him. Photo: BCCI Twitter

The Indian cricketing legend Sachin Tendulkar was one of the first to congratulate Dhanawade on his innings and sent him an autopgraphed bat with the message: "Dear Pranav, Keep up the hard work and enjoy the game!"

Despite the details around the innings emerging current Indian captain MS Dhoni was still full of praise for the young batsman.

"Scoring 1,009 runs is not a joke. It's a tremendous effort and shows a glimpse of talent," he told reporters ahead of India's departure for their tour of Australia.

"I wish him all the best and hope he will carry on doing well. For me, batting for so long, I would have been bored myself."