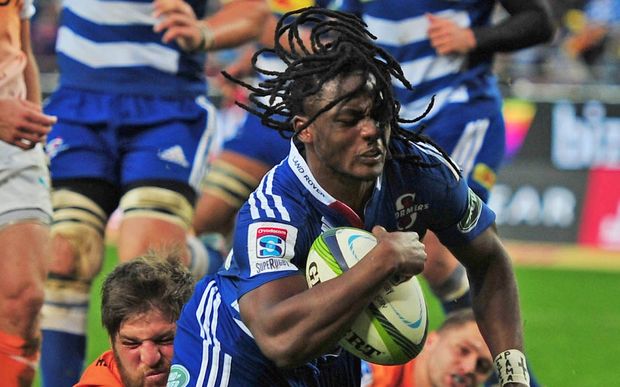 Wing Senatla is making a late bid for a place in the Springbok squad for the World Cup in England later in the year having become available to The Stormers last weekend after completing the international Sevens World Series season.

He showed his pace and power to help the Cape Town-based side consolidate their place at the top of the South African conference as they moved to 43 points from 14 games.

The win also leaves them in second place in the overall Super Rugby log with two rounds remaining and on course for a home semi-final.

The Cheetahs battled in what is coach Naka Drotske's final match of his eight-year spell in charge. Drotske has been given permission to leave the team before the end of the Super Rugby season to pursue business interests.

Also this morning two tries from wing Ruan Combrinck lifted the Lions to a 27-22 victory over the New South Wales Waratahs in Johannesburg.

The win keeps alive the Lions' hopes of a surprise place in the playoffs with 40 points from 15 matches, three behind the Stormers, South African conference leaders, and two adrift of the Waratahs in sixth on the overall log, though they have played a game more than both those sides.

The Lions have already recorded their best-ever season in Super Rugby with a ninth victory and now face a crucial encounter for top spot of the South African conference when they travel to the Stormers next weekend.

Combrinck's brace helped the Lions to a 17-10 halftime lead and when centre Harold Vorster added a third try early in the second period it looked as though the home side would run away with it as they opened up a 17-point lead.

But the Waratahs fought back as centre Adam Ashley-Cooper and wing Rob Horne, who was earlier yellow carded for a dangerous tackle, added to a first-half try from flanker Stephen Hoiles to keep the visitors within five points.

First-five Elton Jantjies, who had earlier kicked three conversions and two penalties, missed three penalty attempts in the final quarter which would have given the Lions breathing space.

The Waratahs' other points came via number 10 Bernard Foley, who kicked two conversions and a penalty.