Australian rugby has been plunged further into crisis with under-fire coach Ewen McKenzie announcing his shock resignation directly after the Wallabies' last-gasp loss to the All Blacks. 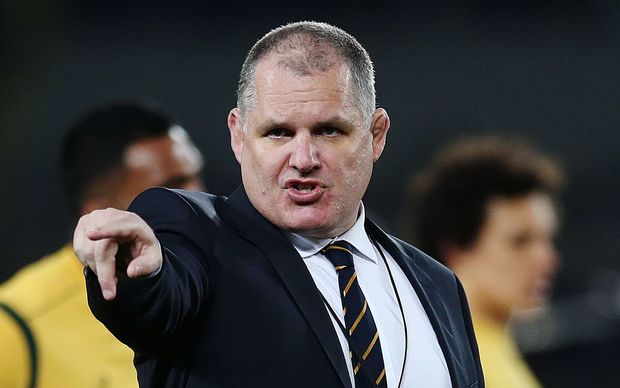 The All Blacks scored a last-minute converted try to give the world champions a dramatic 29-28 victory in the final Bledisloe Cup test at Brisbane's Suncorp Stadium.

McKenzie, who took over from Robbie Deans in July last year, had come under pressure for his role in the row over offensive text messages Kurtley Beale allegedly sent to a team official in June.

Beale faces a Code of Conduct hearing into the affair next week but it has already caused two weeks of turmoil which have made Australian rugby a laughing stock around the world.

McKenzie informed the Australian Rugby Union of his decision on Saturday morning and publicly announced his resignation after the heartbreaking defeat in Queensland.

"My intention was win, lose or draw tonight, to announce my resignation tonight. I've just told the team," he said post match.

"It's been a disappointing time I think for many reasons, I won't even go into the detail, you guys can work it out."

"I've written to the board and I've been unhappy with a bunch of things so the easiest thing for me is to exit stage left and I'll leave you guys to ponder, speculate and I'll write a chapter of my book and you will know all about it."

Last week, the 49-year-old was forced to deny he had been involved in an intimate relation with Di Patston, the now former official at the centre of the Beale row, and he faced the accusation that he had lost the support of senior players over her role with the team.

ARU chief executive Bill Pulver says Australian rugby has lost a very good man. "In essence, Ewen said he was going to struggle to retain the level of support he needs from the playing group and, in my view, because of the character assassination he's suffered in the last two weeks."

"The attack on Ewen was relentless and essentially left him with the view it set him too far back to be an effective rugby coach," Pulver added, criticising the media campaign that many believe led to McKenzie's downfall.

Former Australia skippers Phil Kearns and George Gregan both rallied behind McKenzie, a 51-Test prop who was a member of the 1991 World Cup-winning side.

Kearns said an under-pressure McKenzie had been treated poorly by the media in the fallout from the Kurtley Beale texting scandal.

"Ewen's been hung out to dry by the press over the past couple of weeks in writing articles that were just clearly wrong," he said.

"It's a really disappointing moment for Australian rugby."

"We've lost potentially a great coach. We didn't have the results on the board just yet but I think we've all just agreed here tonight there were some positive steps forward."

The defeat to the All Blacks was a third straight loss for the Wallabies after defeats in South Africa and Argentina over the last month and left McKenzie with a 50 percent winning record in his 22 matches in charge.

Pulver said he hoped to appoint a new coach to take Australia through to the "World Cup and beyond" before the end of the week when the Wallabies depart for their tour of Europe.

If that was not possible, he said, the ARU would consider a caretaker coach.

Former Springbok coach Jake White, who was in the frame to replace Deans last year, and Michael Cheika, who led New South Wales Waratahs to the Super Rugby title this year, are likely to be leading candidates.

McKenzie, who led the Queensland Reds to the 2011 Super Rugby title, got the job when Deans was sacked in the wake of the series defeat to the British and Irish Lions.

Very much an advocate of the "my way or the highway" school of management, the World Cup-winning test prop stamped his authority on the squad early in his reign when he disciplined 15 players for a late night out in Dublin last November.

A seven-match winning streak through last year's tour of Europe and the 3-0 sweep of France in a June test series this year offered the promise of improvements on the pitch.

But hopes of reclaiming the Bledisloe Cup from New Zealand - Australia's Holy Grail - foundered with a 12-12 draw and 51-20 defeat against the All Blacks at the start of the Rugby Championship in August.

The former Wallabies prop, nicknamed "Link", started his career with the New South Wales Waratahs in 1987 before switching to the Canberra-based ACT Brumbies.

McKenzie made his Australia debut against France in 1990 and played his last match for the Wallabies seven years later against England in 1997.

One of Australia's finest props, he won 51 Test caps and was part of the side that won the 1991 World Cup with a 12-6 victory over England in the final at Twickenham.

McKenzie joined the Wallabies as an assistant to head coach Rod Macqueen in 2000 and later served under Eddie Jones, helping the team to two Tri-Nations trophies, a series win over the 2001 British and Irish Lions and a final appearance at the 2003 World Cup.

He took his first role as head coach when he succeeded former Wallabies coach Bob Dwyer at the Waratahs in 2003.

The Waratahs reached the Super rugby final in only his second year in charge in 2005. He also took them to the semi-finals the following year and another final in 2008.

McKenzie quit the Waratahs after the 2008 final defeat and joined top French club Stade Francais, taking them to the Top 14 semi-finals in 2009.

He was abruptly sacked after a poor start the following season and returned home to take the reins at the Queensland Reds in 2010.

McKenzie quickly transformed the Brisbane side from cellar-dwellers to contenders and led them to their maiden Super Rugby title in 2011.

McKenzie announced he would leave the Reds at the end of the 2013 season to pursue an international coaching career.

Beat out rival candidate Jake White, a World Cup-winning coach with South Africa, for the Wallabies post after Robbie Deans departed in the wake of the British and Irish Lions series defeat.

Started his reign with back-to-back defeats to the All Blacks and the Wallabies also lost to the Springboks home and away in his maiden Rugby Championship campaign to finish third.

Banned six players - including widely respected back Adam Ashley-Cooper - for one test and handed written warnings to nine others after a drinking session before the victory over Ireland in November.

After losing to England, won the four remaining matches on the tour of Europe.

A comprehensive 3-0 sweep of the French in this year's June series sent the team into the Rugby Championship on a run of seven victories.

A 12-12 draw with the All Blacks to start their campaign was followed by a 51-20 hammering at Eden Park, ending Australian hopes of reclaiming the Bledisloe Cup.

A last-gasp try from Rob Horne against the Springboks in Perth gave him his first victory over a team in the top three in the world rankings but Argentina claimed their first ever Rugby Championship win with a 21-17 victory over the Wallabies.

An altercation between back Kurtley Beale and team business manager Di Patston, who McKenzie had brought with him from Queensland, on the flight to Argentina sparked the crisis which led to his resignation.