The Australian netball team have continued their recent dominance over the Silver Ferns, taking a 1-0 lead in the Constellation Cup thanks to a 59-42 win in the opening match in Invercargill. 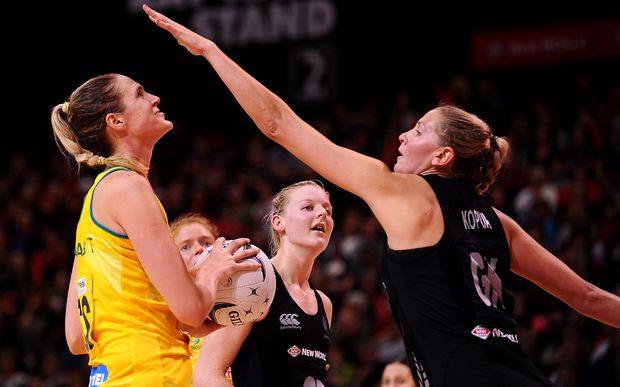 Caitlin Bassett of Australia lines up a shot, during the Constellation Cup. New Zealand. 2014. Photo: PHOTOSPORT

The 17-goal win in front of a capacity crowd at Stadium Southland stretches the Diamonds' winning streak over New Zealand to six Tests as they celebrated captain Laura Geitz 50th Test.

The Diamonds have now won 14 Tests in a row overall.

It was Australia's first win at Invercargill since 2009 and made amends for last year's four-goal defeat in the corresponding match against the Silver Ferns.

Australian goal shooter Caitlin Bassett picked up where she left off in the Commonwealth Games Final in Glasgow, finishing with 44 goals at 91 per cent accuracy and going past 1000 international goals early in the third term.

Geitz said the Diamonds focused on making a strong start but even she was surprised with how quickly they were able to take control.

"We wanted to come out and have a great first 15 (minutes) and eliminate the crowd (because) we know how vocal they can be," Geitz said after the game.

"I didn't think we'd have such a handy lead, even going into the second half."

Both sides were surprisingly sloppy with their ball handling in the opening minutes before the Diamonds settled and quickly raced to an early lead.

The Diamonds led by five goals at quarter-time and then stamped their authority on the match early in the second term.

Bassett shot 17 goals before she had her first miss late in the second term but it was her only blemish of the first half as she helped power the Diamonds to a 15-goal lead at the main break.

Silver Ferns coach Wai Taumaunu made multiple changes in an attempt to spark her side - including bringing shooter Bailey Mes on court for her first Test in almost two years.

The Diamonds started the second half with the same starting line-up and scored the first five goals of the third term to stretch the margin out to a game-high 20.

The Silver Ferns enjoyed their best period of the match mid-way through the quarter by scoring seven unanswered goals to close the gap to 13 as they lifted their defensive pressure right across the court.

But Bassett steadied the Diamonds by continuing on her goalscoring spree to give Australia a near unassailable 18-goal lead heading into the final term.

Diamonds coach Lisa Alexander took the opportunity to make changes to her line-up for the final 15 minutes with Kimberlee Green, Sharni Layton and Tegan Caldwell coming on for the Diamonds to replace Kim Ravaillion, Julie Corletto and Medhurst.

Grace Rasmussen came into wing attack to replace Liana Leota in her first appearance for the Silver Ferns in four years.

The final quarter proved the most even of the match with both sides shooting 14 goals.

The series now heads to Australia for two Tests, in Melbourne next Wednesday and Sydney the following Saturday before concluding in Auckland on Tuesday October 15th.