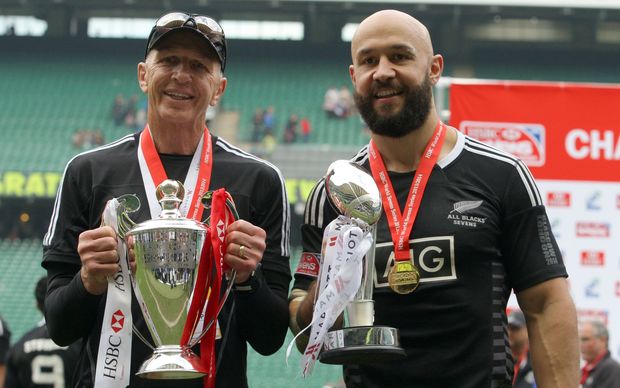 The uncapped players include 20-year-old Jordan Bunce, son of former All Black Frank Bunce, who will have the opportunity to earn his own black jersey alongside the other potential debutants when the squad assembles in Mt Maunganui next week.

Former Bay of Plenty Steamer Matt Clutterbuck, Otago outside back Tony Ensor, former New Zealand Schools and Under 20 representative Junior Tofa Vaa and Counties Manukau midfielder Sam Vaka are the other new players in the squad.

Coach Sir Gordon Tietjens will take all 16 players to Noosa where he will name the playing 12 for the October 3rd to 4th tournament.

"I'm quite excited about this group - we've got some real talent in there and the question will be whether they take their chance and step up to the challenge." Tietjens said.

"Jordan was great at National Sevens in Rotorua this year and he showed a great sevens skillset at trials."

"Matt is a workhorse who excelled at trials and got my attention."

"He's got to be one of the fittest guys around."

"As someone who has been around senior rugby for a while and as a former ITM Cup player, he has great experience."

"As he has shifted his focus to Sevens, I've seen a real improvement in his skills, he'll be a great addition to the team."

"Tony has been involved in our training environment before, but he hasn't come away with us, so it's exciting that we will have his counter attack skills at our disposal.

"Junior's a big winger, and the game is calling for big wingers - so he's got some real potential to be a key weapon for us.

"These new players, and the return on of players like Trinity Spooner-Neera, George Tilsley and Gareth William-Spiers is a great opportunity to create some competition to playing spots and that's exactly what I'm looking for." Tietjens said.

The squad assembles at Mt Maunganui on Monday.

They depart for Noosa on Wednesday with that tournament kicking off on Friday.

Tietjens will name the All Blacks Sevens playing squad for the opening leg of the World Series at Surfers Paradise the following weekend on October 6th.

The tournament will be an opportunity for All Blacks Sevens Coach Sir Gordon Tietjens to blood in new players and for players needing game time, to contest for a spot in the All Blacks Sevens team to play the first leg of the 2014/2015 HSBC Sevens World Series tournaments on the Gold Coast.

The squad is (*denotes new players):