The Czech Petra Kvitova produced a majestic performance to end Eugenie Bouchard's hopes of becoming the first Canadian to win a grand slam title with a 6-3 6-0 win in the Wimbledon final. 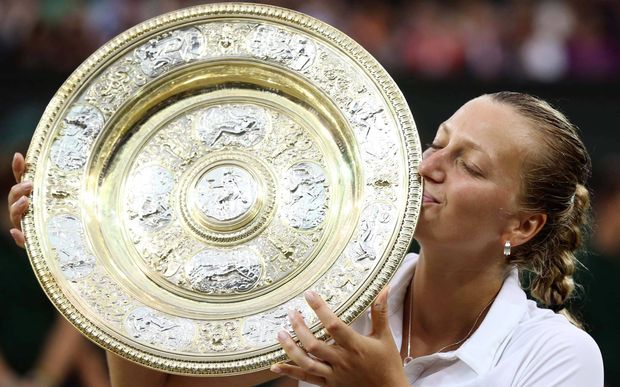 Much had been made of Bouchard's raw power and determination to triumph in what she calls the "Temple of Tennis" but the 20-year-old was unable to cope with sixth seed Kvitova's more varied attacking style.

Bouchard was watched from the Royal Box by the British princess she had been named after but the occasion of playing in her first major final appeared to overwhelm the 13th seed.

Kvitova, the 2011 Wimbledon champion, hit rip-roaring winners left, right and centre to win the most one-sided final since Steffi Graf also dropped only three games against Monica Seles in 1992.

Bouchard dropped serve in the fourth game after Kvitova hit a scoring crosscourt winner to end an entertaining rally that had sent both players scampering around the court.

Kvitova's only blip during a 55-minute demolition job was when she first attempted to serve out the set at 5-2. She dropped her serve but then broke her rival in the next game with a thumping return.

The crowd tried to lift Bouchard's sagging spirits with cries of "Come on Genie" but left-hander Kvitova simply went into overdrive in the second, winning it in 22 blistering minutes, and ended her victim's ordeal with a sizzling backhand crosscourt winner.

It was the quickest final since Martina Navratilova took 54 minutes to wallop American Andrea Jaeger 6-0 6-3 in 1983.