Lincoln University plant science professor Derrick Moot has won an award recognising the successful application of research or experience to an aspect of animal production. 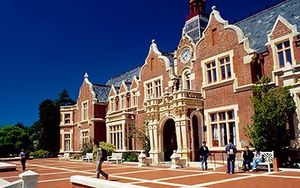 Prof Moot has been identifying plant pasture species which will survive and thrive on the dry East Coast, and developing ways to incorporate them into mostly sheep and beef farming systems - but also some dairying ones.

Lucerne ticked most of the boxes as it was a legume which fixed nitrogen from the atmosphere, was high in protein and energy and also had a deeper rooting system than other pastures, he said.

Most pasture was ryegrass and white clover, which worked best where there was consistent rainfall or irrigation, and farmers could apply nitrogen.

"For other areas it doesn't work so well, and the climate change scenarios that are developed for New Zealand actually just accentuate the differences," Prof Moot said.

"So we need to not wait for 2030 to create systems that are more resilient, we actually need to create them for now, and then they will be more resilient for any climate change occurrence that happens in the next couple of decades."

Prof Moot said farmers in some parts of the country had been particularly interested in his work.

"Particularly those in Marlborough, and in Central Otago and up through the Mackenzie Country who are starting to experience drier summers and have been through some fairly dry periods - they have started to adopt.

"And I've had a lot more interest in the lower North Island in the Wairarapa, through to Hawke's Bay and up into Gisborne, in the last five years or so.

"And so there's certainly a growing awareness and uptake of particularly the lucerne grazing management that we've been promoting."