A passion for plants is the driving force behind the winner of this year's Young Horticulturist of the Year competition.

Kelly Jean Kerr, a Whanganui garden centre assistant, was one of six finalists from different horticultre sectors who competed in two full-on days of challenges in Auckland this week. 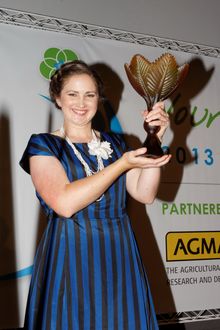 She says more people are getting into gardening and discovering there are therapeutic as well as economic benefits.

Ms Kerr says some people are growing their own vegetables because their budget is not stretching far enough, but being out in the garden also has huge benefits for people's physical and mental wellbeing.

She says a new marketing campaign is being launched in Australia to recognise the benefits being in contact with plants have on people's lives.

The Australians have carried out research and have figures to back the campaign up, she says.

Ms Kerr will use the travel scholarships she won to look at horticulture developments overseas, including in Britain and Germany.

Second place was won by Eliza Whalley, a plant collections specialist who manages the Percy Scenic Reserve in Lower Hutt.

She also won the AGMARDT Market Innovation Project for her new design for a backpack sprayer.

The sprayer was resigned to be lighter and an option to carry it on the hips, not just the shoulders, was added.

Ms Whalley is hoping her redesigned backpack sprayer might be marketed at some stage.