Power Play - Rule number one for a successful political career: do not make your leader look bad.

It's rule a Trade Minister Todd McClay broke in his handling of allegations about potential trade retaliation by China if New Zealand authorities proceed with an inquiry into complaints about steel dumping.

A Fairfax media report about possible reprisals from China appeared just as Mr McClay and Prime Minister John Key were about to embark on a trade visit to Indonesia.

In short, the allegations were that certain New Zealand export companies had been approached by industry groups in China, threatening retaliation if New Zealand authorities decided to formally investigate claims of steel dumping, made by a New Zealand company.

Speaking from Jakarta, Mr McClay dismissed the story as producing no hard proof and said the claims were "extremely hypothetical".

The story was further complicated by World Trade Organisation (WTO) rules that dictate any complaint is to be treated as strictly confidential until a formal decision has been made to investigate - in this case, a branch of New Zealand's Ministry of Business, Innovation and Employment.

But while still in Indonesia, Mr McClay changed his story, having checked with his office and discovering he had in fact been briefed the week before on a possible approach to a New Zealand company.

Upon his return, a third version of events were issued via media statement - that in fact over the past few months the Ministry of Foreign Affairs and Trade had been trying to find out more about the approach, which was in the form of an email to kiwifruit export company Zespri.

Mr Key also answered media questions in Indonesia and downplayed the claims as unsubstantiated based on what Mr McClay had told him. 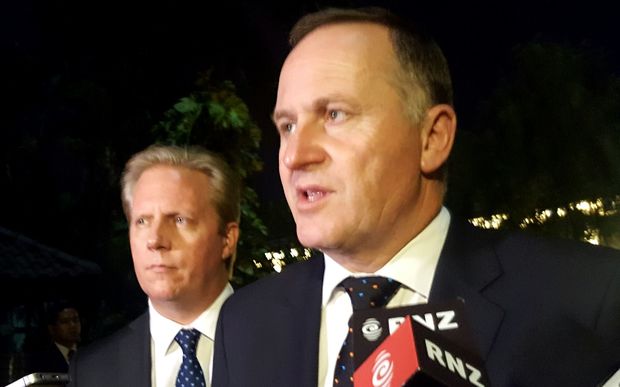 Unimpressed with the untidy way the issue had rolled out, he later said Mr McClay had allowed the "wrong impression" to be created with his response to the initial questions.

Zespri also found itself itself in the middle of the media controversy and had to tread cautiously. It refused to comment or confirm it had been approached by industry representatives in China, until confirmation came from the government.

Although, as recipient of the email from China and so the source of the information - Zespri would have been mindful of its trade relations in the significant China market and would not have wanted to be seen as stirring the diplomatic pot in any way.

But it is not up to individual companies to handle situations like this - it is up to government ministers and diplomats.

The information initially went under Mr McClay's radar because it was not presented as "official advice", but nonetheless he was made aware of it, and at the least the Fairfax story should have been enough to prompt his memory, or at least further questioning of officials.

Having sought and received assurances from the Chinese government there would be no trade implications if in fact a steel dumping inquiry was to proceed, the Prime Minister said he has taken the Chinese at their word and declared there was "nothing to see here".

Mr McClay is being groomed to take over from Murray McCully when he retires from Parliament and as Foreign Minister. So far he has proved to be a safe and reliable minister, cutting his teeth on the final stages of the contentious Trans-Pacific Trade Partnership deal.

But the Labour Party has called for Mr McClay to either resign or be sacked, saying the minister was clearly out of his depth on an issue with potentially significant implications.

The recent blunder may not be a sackable offence, but it is certainly a black mark.

Having to publicly apologise to the Prime Minister is something no MP or minister wants to do, especially one who will be expected to navigate the world diplomatic stage, possibly in the not-so-distant future.