Prime Minister John Key is continuing to refuse to say who told him about allegations the Labour Party received donations from businessman Donghua Liu. 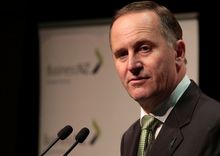 Labour says it is yet to see a shred of evidence there were any large scale donations, said to have been made in 2007, and cannot find any records of donations from him.

John Key has acknowledged he has known of Liu's claims for weeks.

The Herald on Sunday has reported it has a signed statement from Liu that he paid $100,000 for a bottle of wine signed by then prime minister Helen Clark in 2007. The paper earlier said Liu paid $15,000 for a book signed by Ms Clark.

Liu was at the centre of the scandal that led National MP Maurice Williamson stepping down as a minister after it was revealed he contacted the police while they were investigating Liu on domestic violence-related charges.

Mr Key is refusing to say how he first heard of the claims about donations to Labour.

"People tell me things, I hear things all the time," he said.

He said he would not "go through that" when asked if his source was the right-wing blogger Whaleoil and would not go into whether he had seen the transcript of Liu's statement.