Mr Peters announced the policy at the party's annual conference in Christchurch on Sunday, and said it would be a bottom line for his support in forming a government. 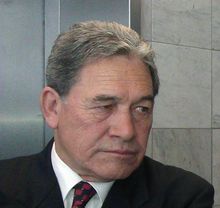 Under the plan, a Government-guaranteed KiwiFund scheme would invest substantially in New Zealand.

Mr Peters said the fund would be offered alongside the private providers, but would have a much higher return and a government guarantee of capital, and would slash costs and fees.

"When people see the choice between paying high fees and low returns and a fund which is a world class model, unsurpassed by anything in the world, I think they'll make their choice."

He says the new scheme would be more along the lines of schemes offered in Singapore and Chile.

Mr Key says guaranteeing just one provider would create a massive problem, as it would remove all risk for its investors in a financial market that does go up and down.

He is not bothered by Mr Peters' claim that the scheme would be a bottom-line for his support in forming a government in 2014.

"He talks in riddles, he doesn't stick to what he says. It's a waste of time having a discussion that this is a bottom line. There are no bottom lines when it comes to Winston Peters. He'll do a deal with who he feels like doing with come an election if he's in government. But saying this is a bottom line, and he'll stick to it - it won't be a bottom line the way you write it."

"It's not our starting position. We don't think that in general the KiwiSaver model is broke and so it doesn't need this fix. We share with Mr Peters a concern that in some cases, in particularly some conservatively managed funds, the level of fees seems disproportionate to the returns on those funds. We'd be very happy to have a very close look at that aspect of it."

The Financial Services Council, which represents investment companies, says the amount KiwiSaver funds are taxed is by far the biggest drag on the returns people can expect.

The council has released a report showing the effective tax rate on KiwiSaver funds is 38% compared to negative 40% on British superannuation funds and negative 30% on Australian funds.

Council chief executive Peter Neilson says KiwiSaver nest eggs are effectively reduced by more than 50% over 30 to 50 years, because of the tax take.

Mr Neilson says the New Zealand First leader is wrong to say the fees fund managers charge on Kiwisaver accounts are too high.

He says fees are typically between 1% and 1.5% and the Government Actuary has approved the present charges as reasonable.

"Any comparison of fees in New Zealand would indicate not only are they lower than Australia, but in fact in terms of the size of account under management they're actually competitive with anywhere else in the world. "