MPs on Thursday congratulated the new Speaker of the House of Representatives and paid tribute to the departing one, but there have been Opposition grumbles about how the Government handled the election process.

David Carter, a former Cabinet minister and National MP, replaces Lockwood Smith, who is set to be the next High Commissioner to Britain.

Just before Parliament sat to elect the new Speaker on Thursday afternoon, Labour nominated its Hutt South MP Trevor Mallard for the role, saying the Government had acted arrogantly by not consulting Labour.

That was rejected by Prime Minister John Key and Mr Carter, who said there had been some consultation and that it was not the usual practice to consult parties.

New Zealand First Winston Peters said his party was also very disappointed that there had been no engagement over the election of a new Speaker. Both New Zealand First and the Green parties said they would vote against Mr Carter.

But National had the numbers to elect Mr Carter by 62 votes to 52 and he was formally confirmed in the position by Governor-General Sir Jerry Mateparae about 4pm.

Shortly after the win, Mr Carter addressed the House.

"In electing me as Speaker today, you are charging me with the responsibility of upholding the dignity and the respect that this institution deserves. And I accept that responsibility with enthusiasm." 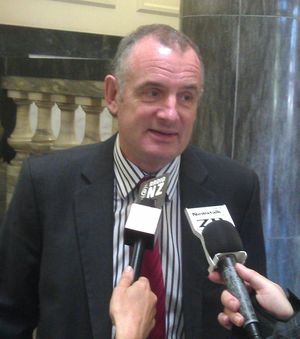 "It makes your job doubly difficult - and I'm certain you are very much aware of it.

"If the Government want a cooperation, it needs to understand that cooperation is a two-way street. The manner of this selection evinces arrogance and a poor understanding of the need to try and image political neutrality in this post."

However, Mr Peters said his party would cooperate with David Carter.

Mr Carter - along with party leaders - paid tribute to Lockwood Smith, saying he has held ministers to account and that he intends to do the same.

Labour leader David Shearer earlier said Trevor Mallard would be a very good Speaker, despite having been kicked out of the House several times, because he is fair and takes the role of Parliament seriously. 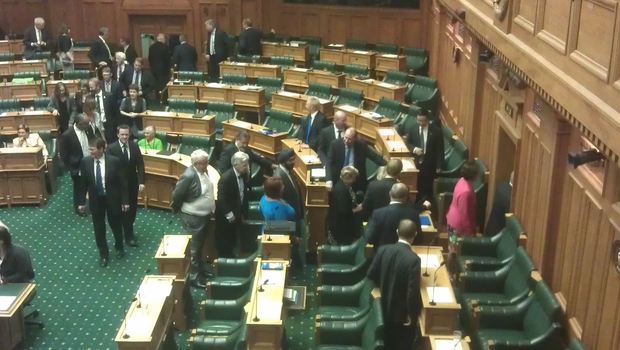 MPs vote for the Speaker in the Debating Chamber on Thursday afternoon. Photo: RNZ

Lockwood Smith, a National MP, is expected to take up the High Commissioner's based in London in March.

His departure will mean the next person on National's list will enter Parliament. He is Aaron Gilmore, who narrowly missed out on getting into Parliament at the 2011 election.