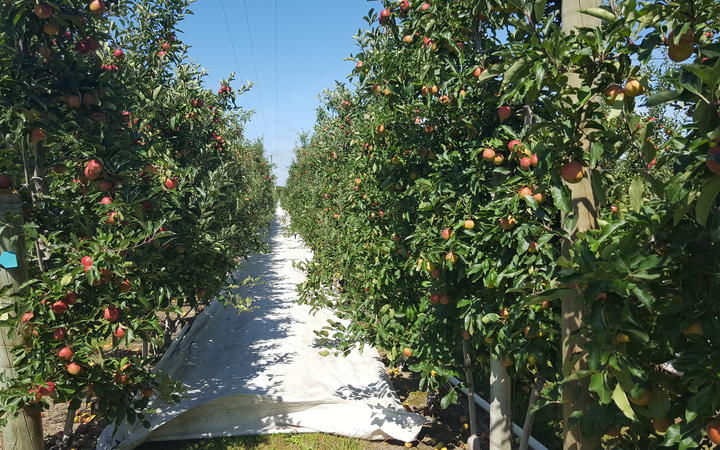 Growers can apply to the regional council for emergency water supplies to protect young trees in the Tukituki catchment. Photo: RNZ/Carol Stiles

The ban on the Tukituki and Waipawa rivers and streams means about 200 consent holders cannot take their allocated amounts, leaving many irrigators without any alternative.

"All our veggie crops for McCains and Watties such as beans, tomatoes, sweetcorn, beetroot, onions.. then your trees such as apples, if they don't have water for too long they'll die or the fruit might not mature and yields will be well down."

A lack of rainfall in the Ruahine ranges, which fed the region's main rivers, combined with hot dry weather was to blame for the drop in river levels, which were nearing those experienced during the 2013 drought, Hawke's Bay Regional Council group regulation manager Liz Lambert said.

With no rainfall on the horizon, the Hawke's Bay Regional Council said further restrictions were likely.

A ban on the Ngaruroro River near Fernhill, affecting 62 consent holders, could come into force today and one on the Tutaekuri River near Puketapu is also imminent, she said.

"That could mean around 300 consent holders are affected."

Regional councillor and apple grower Jerf van Berk said his orchards would suffer if a ban on the Ngaruroro was brought on.

"Younger trees will suffer really bad, they lose growth, condition and maybe they don't have much crop this year but they'll also be affected next year."

Growers could cope with a short-term ban but there could be "dire" consequences if it lasted till the end of the season in April, he said.

Growers could apply to the regional council for emergency water supplies to protect young trees in the Tukituki catchment, Liz Lambert said.

"Unfortunately, the Ruataniwha hasn't gone ahead and we still need to look and try and find some means of storing water rather than relying on aquifers and rivers."

But such schemes were not the answer to dropping river levels, Forest and Bird lower north island manager Tom Kay said.

"The unfortunate reality is that when we build these dams we generally allocate that water to land users in order to pay for the dam. So in dry times the dam is already fully allocated and we end up getting hit harder when those dams can't cope with our intensified land uses."

More investment was needed in water-efficient crops as the impacts of climate change was felt across the region, he said.