The family of a girl who was killed by a rubbish truck say they are pleased the Coroner's recommendations will help keep other pedestrians safe. 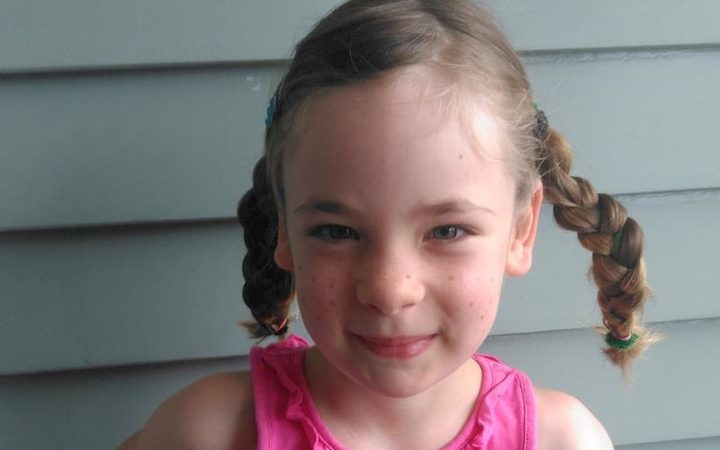 Carla Neems died after being struck by a truck in Gisborne. Photo: Supplied

Carla Neems was run over by a rubbish truck outside her house in Gisborne two years ago.

Six-year-old Carla scootered the last part of her short trip from school to home by herself, when the Coroner says she likely crossed immediately in front of a rubbish truck, in the driver's blind spot, and was hit.

"Once the driver starts to drive, he cannot see that area immediately in front of the truck... It is only during the small portion of time when the truck starts to move and covers the first metre or two that the blind spot is relevant. Tragically, that is exactly where Carla was," said Coroner Tim Scott.

"Tragically, what happened was the result of all things combining badly," he said.

If either Carla or the truck had arrived a few seconds later or earlier, "the tragedy would not have occurred," he said.

"Had the truck been fitted with one or more proximity audio alarms... it is almost (but not absolutely) certain that Carla would have been saved," Mr Scott wrote in his findings.

He was recommending such alarms be installed on all Waste Management trucks within six months, with drivers trained to stop and investigate as soon as they sound.

Alternatively, Mr Scott recommends cameras be installed - however, he was wary of adding to a driver's workload which "risks the possibility of error and might be counter-productive," he said.

In the meantime, he recommended the company put clear signage on its trucks with a warning along the lines of, "caution I stop often and am often driven from the left".

In response, Waste Management said this was a terrible accident, and it was confident it could meet the Coroner's recommendations.

The company had already started work on the alarms and signage, said managing director Tom Nickels.

"Since June, all new Low Entry Vehicle trucks introduced into our fleet are supplied with proximity audio alarms as a standard feature. We have also progressed with investigations into retro-fitting alarms to existing trucks, and we are confident that we can meet the Coroner's recommended timeline," said Mr Nickels in a statement.

Dion Neems said that would make a big difference to pedestrian safety, and he was glad some good would come from his daughter's death.

"What we set out to do, which was to make our communities right throughout New Zealand safer for pedestrians, I really hope we've achieved that. I don't see that as a pyrrhic victory by no stretch, I think that we have done well, we've set out what we wanted to do and the Coroner's recommendations are sound and I thank him for that," he said.

The Coroner also criticised Carla's parents for not accompanying her to and from school.

"Carla was not accompanied home from school by a responsible older person, preferably an adult and she should have been. That is parental responsibility, not school responsiblity. Common sense and the evidence establishes this."

"Sadly, the confidence that Mr and Mrs Neems had about Carla's road safety awareness was misplaced and flies in the face of what happened.... It is my view... that Carla (at 6 years of age) should not have gone to and from school unaccompanied by an adult.

"If for whatever (principal) reason Carla had been accompanied by an adult, her death would have been unlikely," the Coroner wrote.

"Whatever the circumstances, the best way to keep a young child safe is for a responsible adult to be with them."

But Mr Neems said that was not practical for all families, and they were living on a very quiet, suburban street.

"I can understand how that works in theory, what I don't understand is how that is actually manageable," he said.

"It's a blanket comment and I think there're a lot of variables there to take into consideration in terms of risk mitigation," such as education and the area they lived, Mr Neems said.

"There're children in our area unassisted by adults every day of the week," he said.

"[Carla] was on her scooter every day, she was a real sensible kid. She knew the risks around crossing a road, we'd been through that with her... we gained confidence within ourselves that she was at a level, with older siblings, that she would be okay," he said.

Mr Neems also criticised the Gisborne District Council, which contracts the rubbish collection services, for not appearing at the Coronial inquest despite it being invited.

"We will decline this interview request. In respect of this tragedy, we don't wish to add any comment in the media," said a Council spokesperson.