Members of Wellington's Polish community protested against the Polish president at a wreath-laying ceremony on the city's waterfront today. 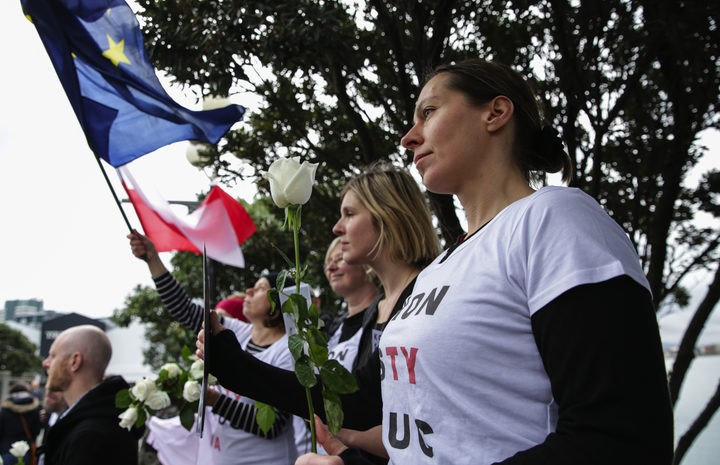 A peaceful group made their fears of the far-right government known. Photo: RNZ / Richard Tindiller

About 100 people, including 20 protesters, gathered before a plaque that honours more than 800 Polish refugees who settled in Pahiatua during World War II.

Many people were there to celebrate the first visit to New Zealand by President Andrzej Duda and the first ever visit by a Polish head of state.

Some refugees and families of those who have settled here lined up to shake Mr Duda's hand.

But others, wearing shirts with the word 'constitution' written in Polish and holding white roses, staged a peaceful protest against the far-right president and his government's policies. 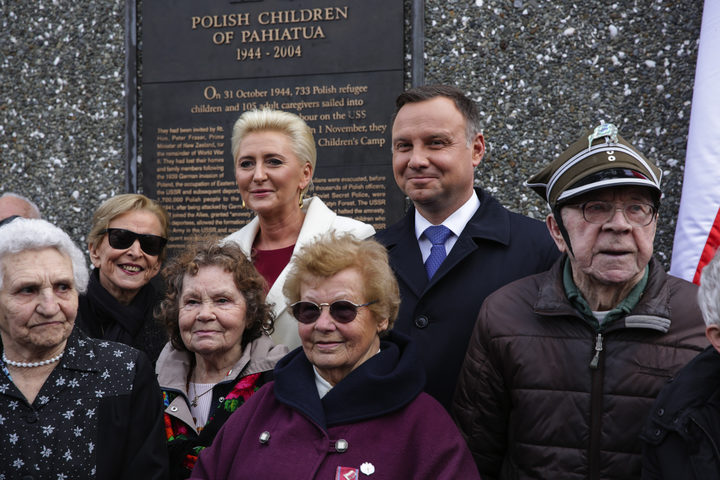 Mr Duda's populist government has recently drawn ire from the European Union and the Polish community for forcing 73 judges to retire early and failing in its asylum seeker obligations.

The European Commission is investigating the country for possibly undermining the rule of law.

One Polish protester at the Wellington ceremony, Marta Edgecombe, said Polish people feared democracy was being threatened and their rights degraded.

"They are already ruling who can protest and who cannot protest. 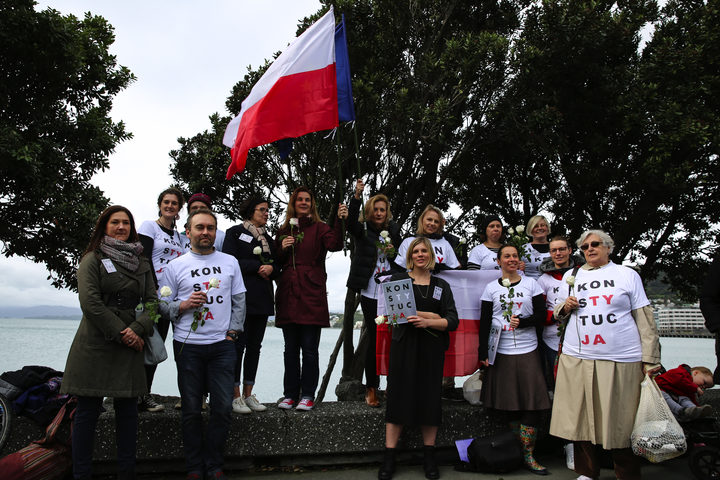 Protestors wore shirts with the Polish word for "constitution" on them. Photo: RNZ / Richard Tindiller

Poles opposed to the government's policies were afraid to share their views or even wear shirts like those worn by the protesters at the ceremony, she said.

"Police are coming to their houses at six o'clock in the morning and checking their houses," Ms Edgecombe said.

One woman, whose parents were both refugees, scorned Ms Edgecombe for placing a protest placard next to the wreath below the plaque.

"I totally agree with the right to protest against the far-right wing Polish government and, I too, don't agree with the politics of Poland," she told RNZ.

"But today was for commemorating my family."

"The Pahiatua Polish Children's plaque is sacred to us."

New Zealand's Prime Minister at the time, Peter Fraser, gave her family and others the "opportunity to survive," she said.

The woman said it is similar to a grave site and that must be respected.

Ms Edgecombe said she understood why the woman was upset.

"I do respect that her family were in a difficult situation and that they were refugees, but I am worried about my family in Poland."

A law lecturer at Victoria University of Wellington, Marcin Betkier, said Poland was in a "deep crisis in the rule of law".

"Since 2015, when the current far-right government took power, the Polish justice system has been systematically dismantled," he said.

"Piece by piece, it has been bought under the control of the ruling party, which has effectively destroyed several key institutions of Polish democracy."