A wave of hearing loss in young people is being predicted as we spend more time listening to devices through headphones and earbuds. 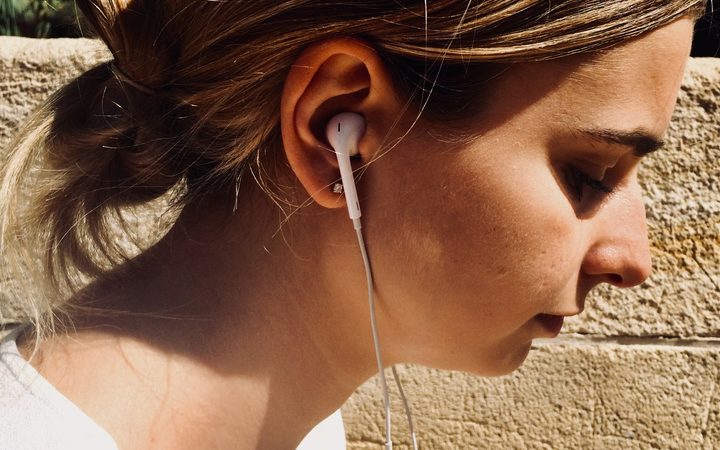 Caroline Brown worries what regular use of earbuds could be doing to her hearing. Photo: RNZ Insight/Teresa Cowie

More than a billion teenagers and young adults are at risk of developing hearing loss from using personal audio devices at damaging levels of sound and from noisy entertainment venues like night clubs and concerts, the World Health Organisation said.

Wellingtonian Caroline Brown, 27, hits the gym two or three times a week, and when she does, in go her earbuds to block out the noise around her.

"I like to listen to music, so I have my headphones, and because it's quite noisy at the gym I find that I need to turn them to the highest volume to be able to hear the music properly."

Miss Brown said she worried about what trying to mask the gym noise with her earbuds was doing to her hearing.

"I don't know if it's doing any damage, but I do find then that later that day when I'm walking home, or I'm at at home and I go to listen to music or a podcast, if it's the same volume [as it was at the gym] I find it's way too loud."

It's was not possible to turn down the gym's music speakers, the exercise machines and the air-conditioning system, so short of any other ideas on how to control the noise, she had tried to go at times when the gym was less busy.

It's not just people at the gym trying to block the noise around the world around them.

Teenagers are rarely seen these days without headphones on, or at least one earbud in their ear.

And while hearing loss tended to be more associated with the older generation, Auckland University audiology professor Peter Thorne said it looked like that was changing.

"There are some studies where younger people coming into the workforce, areas where they might take audiograms or do hearing tests - like the military for example - and those studies have shown a proportion of youth coming in with hearing losses."

The World Health Organisation said nearly half of young people aged 12-35 in well off countries listen to unsafe levels of sound through portable music players and smart phones.

Prof Thorne said the convenience of devices allows us to listen at high volumes and for longer.

"The amount of hearing loss that you might get is actually related to the intensity of the sound and the length of time that you're exposed.

"So with a portable device, you could plug your ear into this device and you can go for many many hours at a level which we know is potentially above the threshold for causing damage."

Peter Thorne said rules for manufacturers of devices were voluntary.

However, the World Health Organisation is currently review regulations around the volume levels devices should be allowed to reach.

You can hear more about Teresa Cowie's investigation into noise on Insight, just after the 8 o'clock news on Sunday Morning