A Japanese doctor whose careless driving injured four people - including his mistress - fears he will have to quit his job at the University of Tokyo because of media coverage of his case. 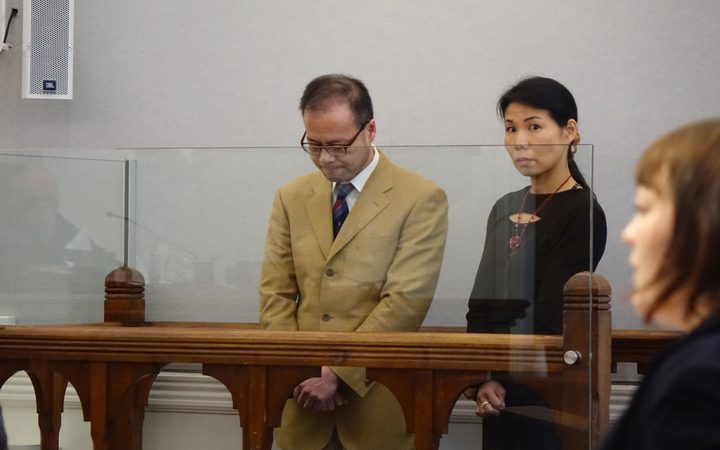 Kansei Uno with his translator in the dock of the Dunedin District Court today. Photo: RNZ / Tim Brown

Uno arrived in New Zealand from Japan with his mistress, Tomoko Koyama, on Boxing Day.

After the 14-hour flight, from Japan to Auckland and then Auckland to Queenstown, he chose to drive from Queenstown to Mount Cook in a rented vehicle.

However, after two hours driving, at about 4pm, Uno pulled over to have a rest due to feeling tired.

After 15 minutes he continued driving and, while in the Lindis Pass, he fell asleep, lost control of the vehicle, crossed the centre line and hit an oncoming vehicle.

The crash resulted in injuries to the Miller family - the three occupants of the other vehicle - and Ms Koyama.

At today's sentencing, Uno, through his lawyer Cate Anderson, attempted to have media applications to photograph his hearing shot down on the grounds it might lead to the Japanese media picking up the story.

Ms Anderson argued it would cause difficulties in Japan to have coverage of the incident accompanied by his photograph and he might have to resign his associate professorship at the University of Tokyo Hospital - where he works in the field of computational diagnostic radiology and preventive medicine.

Judge Kevin Phillips scoffed at the argument, saying "Mr Uno has difficulties in Japan and they are of his own making".

The court, at an earlier hearing, was told he was visiting New Zealand with his wife and he was allowed to return home to accompany her there.

However, that version of events came undone today as it emerged Ms Koyama was his mistress.

Judge Phillips slammed Uno's decision to drive after the long flights and said it was "extremely fortunate the Miller family didn't have death...visited upon them".

The police prosecutor asked if Ms Koyama's name could be suppressed, but Judge Phillips also gave little weight to that, saying: "I'm not suppressing anyone's name".

Uno was convicted on all four counts of dangerous driving causing injuring and ordered to pay $15,000 in reparations to the three injured members of the Miller family.

He was also disqualified from driving for 12 months, though he will return to Japan on a flight later this week.