Two men have appeared in a secure courtroom at the Wellington District Court this afternoon, charged with kidnapping and assaulting a taxi driver. 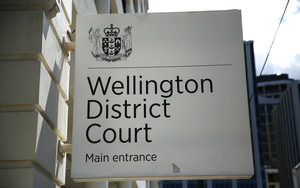 Their brief hearing took place behind bars in a secure courtroom in the building's basement, which is reserved for cases where there are security concerns.

One of the men, who is also charged with carrying an imitation firearm and a knife in a public place, was agitated - shaking the bars, and crying.

He told a woman supporting him in the courtroom, "baby, I love you", and "I'm sorry, I want to change".

The second man was calm during his appearance.

They were both charged with kidnapping a taxi driver, assaulting him, and robbing him of money, a credit card machine, an iPhone and other items.

They were also charged with robbing two people in Petone on Tuesday, where police say they took gold bracelets, bank cards, two cellphones and shopping.

The pair have been remanded in custody and will reappear via video link on 1 September.