A disgraced Malaysian diplomat says he may have used synthetic cannabis, and was confused and desperate to go toilet when he defecated on a Wellington woman's front doorstep. 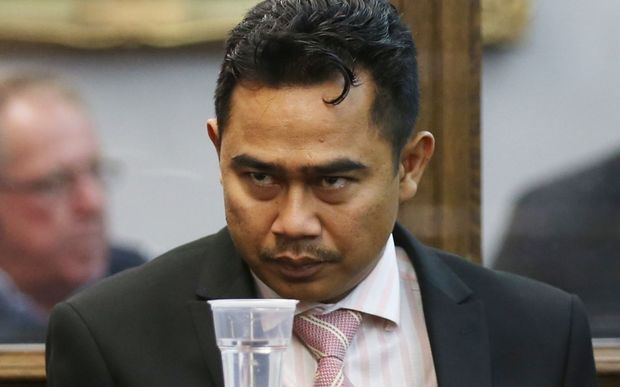 Muhammad Rizalman, 39, pleaded guilty to indecent assault when he appeared in the High Court in Wellington earlier this week, with a disputed facts hearing taking place today.

In reply to questions from Crown Prosecutor Grant Burston, Rizalman said he believed in black magic and told a psychiatrist during an interview earlier this year he was worried about that.

He also told the psychiatrist he believed a superior officer - whose uncle was a shaman - had put a spell on him.

Mr Burston asked whether taking off his belt, trousers and underpants at his victim's home was more about black magic than a toilet emergency and Rizalman said it was not.

At the time he was confused and not in a right frame of mind, he said.

He had been feeling sleepy for more than three or four weeks and those close to him, including his wife, could see he was not sleeping.

He may have used synthetic cannabis to try to make himself better, he told the court.

He had no idea why he bought a mini bottle of Jack Daniels from a Brooklyn liquor store as he did not drink alcohol because it was against his religion to do so.

He believed Tania Billingsley - who took legal action last year to waive her right to name suppression - was smiling at him when they were at a shop in Brooklyn, however Crown Prosecutor Grant Burston said the woman described Mr Rizalman as being "quite creepy".

Rizalman said he believed Ms Billingsley wanted to befriend him and for him to go to her home, so he followed her.

Ms Billingsley went inside and shut the door and Rizalman said he expected she had gone to prepare some food and would eventually invite him in so they could talk about his problems.

While he was waiting outside her home he had an urgent need to defecate, even though that had never happened to him before.

He only had time to remove his trousers and underpants and defecate where he stood and he had no chance to go to a lawn area nearby because there was no time to do that, he said.

He denied that he had take off his trousers and underpants because he was interested in having sex with Ms Billingsley, saying he went into her house because he wanted to clean himself.

"As a Malaysian usually we clean ourselves after we pass a motion with water and our left hand. I went into the house so I could use the bathroom".

He went into Ms Billingsley's room with his genitals exposed because he wanted to ask her where the bathroom was because he could not find it, he said.

During the afternoon the incident occurred Rizalman's wife made 132 unanswered calls to his phone. He told the court he did not answer them because the phone battery was dead and he did not realise anyone had called.

Victim stunned to find diplomat in her home

Earlier this week, the court heard how Ms Billingsley was watching a movie on her laptop at her home in the Wellington suburb of Brooklyn in May 2014 when Rizalman entered the house through an unlocked door. He was naked from the waist down.

He knocked on Ms Billingsley's partially closed door before pushing it open and saying "can I come in", Crown lawyer Abigail van Echten said.

"The victim looked up from her bed and observed the defendant standing in the entranceway to her bedroom wearing only a shirt and naked from the waist down.

"The victim got off her bed and began yelling and screaming for the defendant to leave the address."

Rizalman grabbed Ms Billingsley by the shoulders and a struggle ensued, during which Ms Billingsley managed to push him out of her bedroom and into the living room.

"The victim eventually managed to remove the defendant from her address before locking the door. She then ran into the bathroom and called police."

A neighbour in the downstairs flat heard the screams and called Ms Billingsley's flatmate. Her boyfriend, who lived in a neighbouring flat, rushed to the flat, where he found Rizalman, who by then had his trousers on, by the front door.

He confronted Rizalman, who was walking away down the path when the police arrived.