The judge in the South Canterbury Finance trial says he can't see any doubt a former director knew a loan was to a related party. 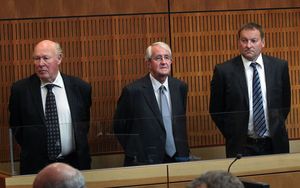 In closing submissions, defence lawyer Marc Corlett disputed the Crown's allegation that Mr Sullivan deliberately hid a related party loan to Quadrant Limited so it could be left out of the company's prospectus.

Mr Corlett said the Crown had given no evidence, and only inferred that Mr Sullivan would have known he was in the wrong, which proved nothing beyond reasonable doubt.

Justice Heath said he did not see Mr Sullivan as someone who was naive in business.

"I can't see that there is any doubt that Mr Sullivan knew that Quadrant was a related party and that the indebtedness was about $40 million. And that even if he did not know what made up the $53 million, he ought to have checked."