The New Zealand Symphony Orchestra has been touring the country performing pieces inspired by the words of Shakespeare, marking this year's 450th anniversary of his birth.

Not only did the Bard of Avon affect other poets, playwrights and writers throughout the ages, but his influence is found in the works of some of the world's greatest classical composers. 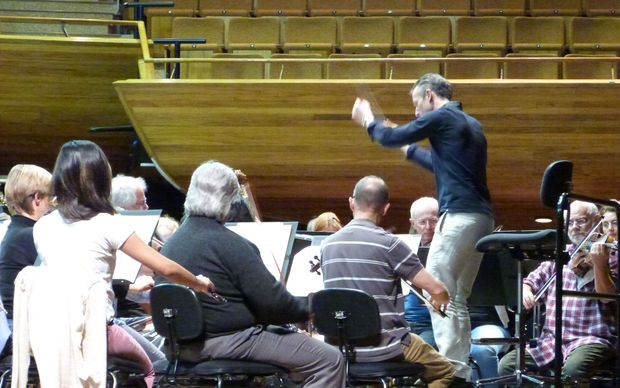 The NZSO in rehearsal in Wellington. Photo: RNZ / Nick Butcher

Shakespeare wrote in The Merchant of Venice: "The man that hath no music in himself, or is not moved with concord of sweet sounds, is fit for treasons, strategems and spoils. The motions of his spirit are dull as night, and his affections dark as Erebus. Let no such man be trusted".

The NZSO has taken those words to heart, performing pieces by Strauss, Mendelssohn, Walton and Korngold during the past week.

The compositions were inspired by plays including Much Ado About Nothing, A Midsummer Night's Dream, Henry V and Macbeth.

Conductor Alexander Shelley said in Mendelssohn added a new level of interpretation to the bard's comedy 'A Midsummer Night's Dream'.

"He took strands and elements of it, the humour, the fairy world and then put it through his prism of another genius, so it's like genius magnified by genius", he said.

Malavika Gopal is one of the orchestra's first violin players and said in Strauss's tribute to Macbeth, and Walton's to Henry V, the dark and murderous stories surge out of the music.

Peter Dykes, English-born associate principal oboe player, said while many of the pieces the orchestra was performing were new to him, he did grow up on a diet of Shakespeare.

"It was compulsory at high school in England to study the old Bard and it's incredible to think there are generations of people who now have a strong knowledge of Shakespeare," he said.

The final performance of Shakespeare in Music by the New Zealand Symphony Orchestra takes place on Saturday in Wellington.