Prime Minister John Key says a diplomat accused of an attack on a woman in Wellington is likely to face charges in his home country.

The man has claimed diplomatic immunity to avoid prosecution. A court order means media cannot identify the person or his country. 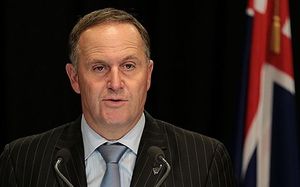 Police say the man in his 30s was arrested in the Wellington suburb of Brooklyn on 9 May this year and charged with burglary and assault with intent to rape after he followed a 21-year-old woman.

He has since left New Zealand, but the charges remain active and a warrant has been issued by the courts for his arrest.

The Ministry of Foreign Affairs and Trade asked his home country to waive his right to immunity, but the request was refused.

"They've certainly have given us an assurance that they're treating the matter seriously and they would expect the person to be held to account. So obviously, there'd be a process that they'd need to follow."

Mr Key said foreign affairs officials have held several meetings with representatives of the man's home country calling for serious action and its ambassador was also being spoken to.

Mr Key said New Zealand has a good and close relationship with the country.

"This is the actions of an individual. I accept that it's their government that has taken the decision to bring that individual back home again. But we've received an assurance that they will be held to account. We'll continue to monitor that."

Radio New Zealand and other media have applied to the Wellington District Court to have the name suppression overturned.

Labour Party foreign affairs spokesperson David Shearer said the Government should not let the issue rest, and, if nothing else, should ensure that the diplomat is tracked down in his country.

Green Party co-leader Metiria Turei believes the diplomat should be extradited if there is a legal means to do so, saying the alleged victim deserves the right to seek justice.

Police said the man would face charges if he returned to New Zealand. MFAT said it is monitoring the investigation closely.