The governing body of football in New Zealand is backing a Northland-based referee whose performance at the FIFA World Cup in Brazil has received a death threat and criticism.

Peter O'Leary, a fulltime teacher in Whangarei, is at the centre of a 23,000-strong online petition calling for him to be fired after disallowing a goal to Bosnia-Herzegovina against Nigeria following an incorrect off-side call by one of his assistant referees. 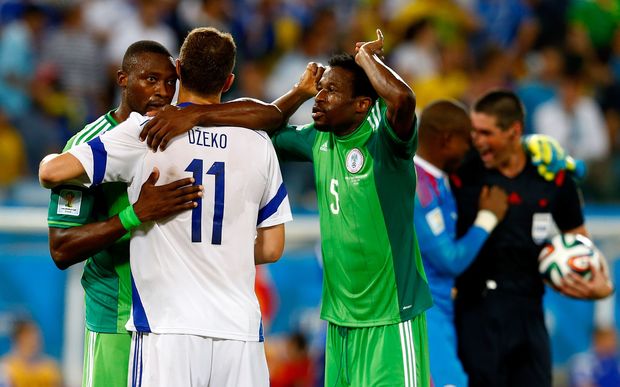 Nigeria won the match 1-0 and Mr O'Leary was photographed embracing the side's goalkeeper after the match on 22 June. Bosnia-Herzegovina are now out of the tournament.

The online petition also calls for the match result to be changed to a draw.

Whangarei police have confirmed that a phone call threatening Mr O'Leary's life was left with local newspaper the Northern Advocate. A spokesperson said on Tuesday they are dealing with the matter with the help of Interpol.

New Zealand Football's referee development officer Ken Wallace said on Tuesday that Peter O'Leary is a good referee and on the basis of his performance has earned another game.

Mr Wallace said Mr O'Leary and assistant referees in the match, Jan Hendrik Hintz and Mark Rule, are good officials and he knows FIFA has confidence in them.

Mr Wallace said he has emailed the men offering his support. He said there was malicious in the incorrect off-side call that denied Bosnia-Herzegovina a goal.

Proud of him, says referee friend

Brett Chibnall, a good friend of Peter O'Leary's and a referee, says he spoke to him after the match and believes the petition is unfair.

"I sent my words of support for him and said to him be strong. We're all extremely proud of him, the referee community.

"The Bosnians are hurting and I think they're just trying to get one back and make themselves feel better.

"I noticed the petition says: 'Get him kicked out of the World Cup and get the result changed'. Well, the result won't be changed, because that's how the laws of the game (work)." He hasn't made an error in law."

Mr Chibnall said he is not sure if Mr O'Leary has seen the petition, but said he would be upset about what has happened.

"He'll be hurting, because Peter's the sort of person who is very upset when he does something wrong or he's affected somebody in a negative way. He'll feel that really, really personally.

"I know that all three of them (Peter O'Leary, Jan Hendrik Hintz and Mark Rule) will be really working hard to look after each other and support each other."

Of the photograph, Mr Chibnall said it is typical for referees to interact with players after a match.

"The Bosnian players went up to him after the game and shook his hand as well ... no photos of that."

He has officiated at the Dallas Cup from 2007-2007 and has also taken part in Toulon Tournaments, Oceania Football Confederation Under-17 and U-20 Championships, Nations Cup, Olympic qualifiers, FIFA World Cup qualifiers, A-League (Australia) and the ASB Premiership.

His New Zealand Football profile says in coping with mistakes, he tries to "dump and forget" using imagery provided by a psychologist.

"I want to referee well and be involved with the game at the highest possible level. I am a product of the many, many people who, over my career, have helped with advice, support and encouragement - physios, doctors, mentors, assistant referees, other refs."

"I try to have a positive influence on the referees I officiate with."