About 11,000 homes in Christchurch could be contaminated with chemicals or hazardous waste left over by past users of the land. 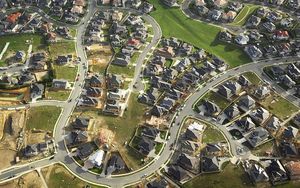 11000 homes around Canterbury could be built on contaminated land. Photo: PHOTO NZ

Canterbury Regional Council is beginning a four week mail-out on Tuesday to the owners of properties that could be affected from soil contamination from a previous use of the land, such as an orchard, market garden or landfill.

Investigations and monitoring director Ken Taylor said most people receiving the notification would not need to do anything.

But those carrying out major land repairs, foundation work or rebuilds as a result of the earthquakes may have to take action.

Canterbury medical officer of health Dr Ramon Pink said that there was very low risk to health from living on contaminated land.

The Green Party is calling for the potentially toxic land around Christchurch to be tested before it is registered as contaminated.

The Green's environmental spokesperson, Catherine Delahunty, says potential areas should be tested rather than being placed on a register of hazardous sites based on historical aerial mapping.

She says subdivisions built on land used for horticulture in the 1960s and 70s might be contaminated with pesticides such as DDT.

Over a decade ago, Waikato Unjiversity researchers showed that in many former orcharding areas, decades of spraying trees with copper solutions had killed off soil organisms that would otherwise have remediated soils contaminated with sprays such as DDT, and their breakdown compounds.

This meant that the potentially toxic compounds persisted in the soil for decades, even after the orchards around a lot of towns and cities were sub-divided into residential sections.