Mr Fletcher, speaking at a seminar organised by the Privacy Commission in Wellington on Wednesday, said the state had legitimate concerns with the prevention of terrorism, organised crime and nuclear non-proliferation. 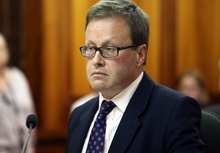 But he said this was a small list affecting few people.

"A surprisingly short list which directly affects very few people, all of whom know who they are because they're doing really bad stuff."

Mr Fletcher denied this involved mass surveillance, which he said would be a huge task requiring his bureau's salary budget to be increased 100-fold.

As well, it would be completely impractical; it would take 130,000 staff to listen to people's phone calls and read their text messages, without even doing anything about them.

Mr Fletcher also went on to denounce what he called the libertarian fantasy, that state security was unnecessary, and the paranoid fantasy, that the state was out to get you.

He repeatedly cited the British philosopher Thomas Hobbes, who argued a strong state was needed to keep peoples' evil impulses in check.

He said even if there was no mass surveillance, the GCSB watched people it decided needs watching but who might not have been convicted of any crime.

But Privacy Commissioner John Edwards was pleased by the speech, saying he hoped Mr Fletcher's comments might dispel what he called conspiracies and misinformation.