The business think-tank, the New Zealand Initiative, is blaming xenophobia for the opposition to its calls to open the gates for foreign investment. 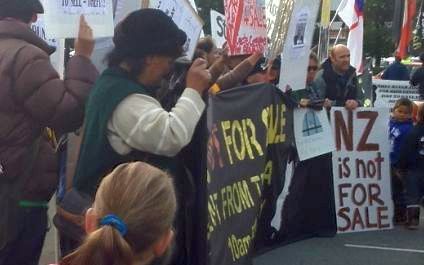 In a report, the conservative think-tank argued overseas buyers should be treated the same as investors in New Zealand.

It said current rules were too restrictive and drove away investors who could create jobs and boost the economy.

Report co-author Bryce Wilkinson said the Overseas Investment Act should be amended to recognise that the gain made by a New Zealand person selling his or her asset was a national benefit.

The report is likely to fuel debate in election year with parties, notably New Zealand First, calling for more, not fewer, restrictions on what foreign investors can buy.

New Zealand First leader Winston Peters said the report was one of the flimsiest he had ever read.

He said New Zealand had a growing gap between the rich and poor and a ballooning debt and he put much of that down to the lowering of barriers.

Dr Wilkinson said that was xenophobic and played on people's anxieties about being shut out and becoming tenants in their own country.

He said the OECD ranked New Zealand as having one of the most restrictive environments for foreign investment in the developed world.

The Labour Party wants to ban the sale of homes to non-residents as part of a package of policies aimed at making housing more affordable.

And its MP, Phil Goff, has a member's bill to be debated in the coming weeks which would tighten the rules for foreigners buying farm land.

He denied that was xenophobic. "The truth is not all foreign investment is good for New Zealand," he said.

And while the Prime Minister is no fan of Labour's policy, even he was not enamoured by the think tank's proposal.

John Key said he had no plans to radically change the Overseas Investment Act.

He said: "New Zealanders wouldn't want to think that anybody could come here and purchase any particular piece of property or company without restrictions.

"We've got rules which sit somewhere about normal for an OECD country."