The Australasian Antarctic Expedition (AAE) set off to sail to Antarctica late last year promising to "truly meld science and adventure". Instead, it became trapped on the ice.

The privately-funded AAE set out to follow the route taken by Australian explorer and scientist Douglas Mawson a century earlier.

The chance to take part in a research project and to visit historic sites from the "Heroic Era" of Antarctic exploration attracted several passengers.

They joined the expedition on the ice-strengthened Akademik Shokalskiy as science assistants and their money helped fund the research. Janet Rise was one of them.

For Chris Turney, a University of New South Wales climate scientist and one of three expedition leaders, this blending of research and tourism was a corner stone of the expedition.

"The beautiful thing about doing that is that you're actually engaging the public. You're trying to get them excited about the science you're doing and that means not just telling them what you found as a result of government funds but turning round and saying let's have a conversation about how science works."

However, because of the expedition's focus on Mawson's original voyage, the main destination was east Antarctica and Commonwealth Bay - a region which has experienced significant changes to its icescape since February 2010, when an iceberg known as B09B blocked access and stopped the sea ice from thawing during summer. 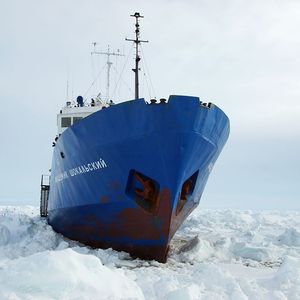 Jon Tucker was on board as part of a three-member field team which planned to carry out maintenance on Mawson's historic huts and describes the ice conditions as treacherous.

Reaching the huts required a 60km journey on snow vehicles across fast ice, and the expedition leaders decided to take the science teams but only one passenger.

They then moved their vessel towards a cluster of rocky hillocks called the Hodgeman Islands, where they used zodiacs and all-terrain vehicles to transport passengers across the ice.

Mr Tucker declined to be included in any of the shore-going parties.

"The Akademik Shokalskiy was taken to the extreme navigable southern corner of the fast ice edge, with a weather forecast of 40 knots east-south easterly gales later in the same day. This made the ship extremely vulnerable to all pack ice and mobile icebergs, and to being brought into a state of considerable ice pressure during any easterly quarter gales," he says.

It triggered a debate about whether the ship's entrapment was avoidable and raised questions about how private expeditions to the Southern Ocean and Antarctica are approved.

Under the Antarctic Treaty, which governs the frozen continent and designates it as a region of peaceful and scientific activity, any expedition has to have a permit issued by government authorities. However, the process of assessment can be significantly different between countries.

The AAE was not part of a national Antarctic programme and nor was it a tourism venture registered with the International Association of Antarctica Tour Operators.

Ten days after Akademik Shokalskiy became trapped, all passengers and the expedition team - but not the crew - were airlifted to the Australian icebreaker, which then completed its resupply mission and returned to Hobart. 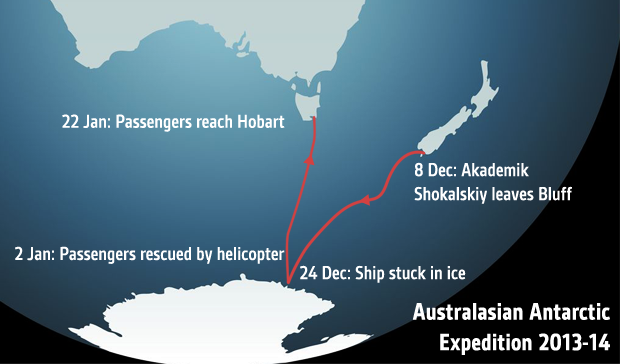 The Australian Antarctic Division has shouldered the cost of the rescue but acting director Nick Gales says it will do its best to recoup the money and limit the impact on the Australian research programme in Antarctica.

"Whenever a ship is tasked with a rescue, as we were by the Australian Maritime Authority, then you respond immediately - and that's appropriate. So we ceased the resupply immediately and the people whose science gear hadn't arrived on station … were obviously directly impacted," he says.

"Any one Antarctic season always encounters hurdles. This particular rescue is a very unusual event and every effort will be made that next season's programme will be independent of this."

The private funding model is not new - in fact it goes back to the 'Heroic Era of Antarctic Exploration' when expeditions led by Scott, Shackleton, Mawson and others had to raise funds from patrons and the public. What is new is that in this case the people whose money contributed to making the voyage possible travelled south themselves.

"This sort of work is expensive, so finding ways to fund it is surely going to help. But also, it's all well and good doing the research but getting a clearer understanding across the broad section of the community is important, too," he says.

"That's not to say that there aren't some challenges with working in that part of the world - and making sure we can do the work safely is one of those."

Greater safety of shipping in polar regions is what the International Maritime Organisation hopes to achieve with the introduction of the new Polar Code, which will be the first mandatory instrument of its kind and is expected to come into force later this year.

The Akademic Shokalskiy's predicament will also be discussed at the upcoming annual meeting of Antarctic Treaty nations in Brazil in April. 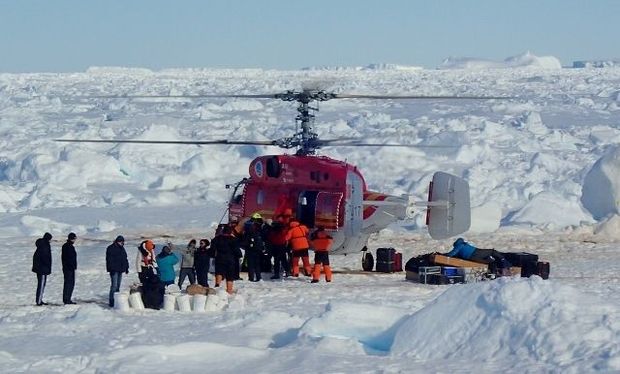 The rescue of the Akademik Shokalskiy passengers. Photo: Barbara and Jon Tucker