New Zealand's Foreign Affairs Minister Murray McCully says he is hopeful an upcoming judgement by the International Court of Justice will help bring an end to Japanese whaling in the Southern Ocean Whale Sanctuary.

Anti-whaling group Sea Shepherd on Monday released fresh footage it says are of protected minke whales caught by Japanese whalers in New Zealand's Ross Dependency, which is inside the sanctuary where commercial whaling is banned. 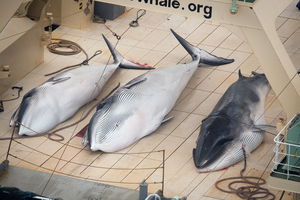 The group claimed victory on Tuesday, saying they have driven the Japanese fleet from some of its hunting grounds and have split them up.

Siddharth Chakravarty, captain of protest vessel the Steve Irwin, said the factory ship Nisshin Maru has been pushed about 400 nautical miles from the protected area, but thinks that could change. "We're returning back to the ice edge. Should the whaling ships return again, we'll be there to drive them out again from the sanctuary."

Murray McCully told Radio New Zealand's Summer Report programme on Tuesday that New Zealand has made a strong case to the International Court of Justice and hoped the court's ruling, along with diplomatic negotiations, could bring the so-called scientific whaling to an end.

"This is something that is being carried out substantially for the purposes of pride and we've got to try and negotiate a way to get past what is a pointless activity that causes offence to a large number of New Zealanders."

Mr McCully said New Zealand had formally lodged an intervention before the International Court of Justice in the case brought by Australia.

The Government has condemned the whaling, but said it is not occurring in New Zealand waters and it will not send a ship to monitor the situation.

Mr McCully said the sanctuary is in international waters and New Zealand has no jurisdiction there. He said reports by Sea Shepherd that Japanese whaling is being carried out in New Zealand sovereign waters are factually wrong.

Sea Shepherd Australia managing director Jeff Hansen said the New Zealand and Australian governments are failing their countries by not being in the Southern Ocean to protect the whales. The Green Party has called on the Government to do more than talk and to send a naval vessel to the Southern Ocean.

In December last year, Australia's Environment Minister Greg Hunt said his government would send a plane to monitor the Japanese fleet, despite promises before the election to send a ship.

A spokesperson for Japan's Institute of Cetacean Research said Japan has a legal right to whale in the sanctuary for research purposes.

Glenn Inwood said Japan has made it clear to the International Whaling Commission's scientific committee that the work is purely for research purposes and is not commercial.

A former New Zealand representative to the International Whaling Commission told Summer Report the International Court of Justice ruling on the legality of the whaling is unlikely to be available until the end of the season.

Sir Geoffrey Palmer said the court is unlikely to release its decision before March. As the law stands, he said, Japanese whalers have a legal right to whale in the sanctuary for research purposes.