The Auditor-General has apologised to the ratepayers of Kaipara for the failure of Audit New Zealand to properly assess the impact of the Mangawhai sewerage scheme.

Lyn Provost delivered a report on the scheme to a packed meeting in Mangawhai on Tuesday afternoon, following an 18-month inquiry into cost blowouts that that triggered the sacking of the Kaipara District Council. 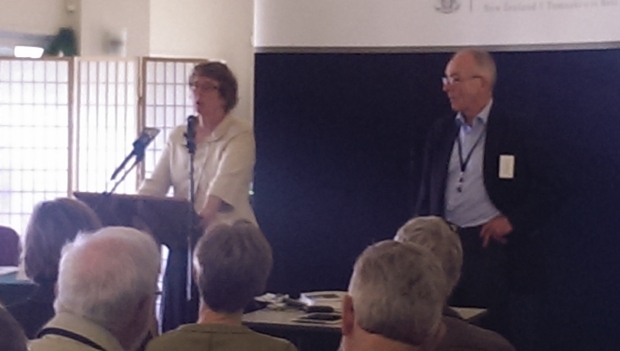 Auditor-General Lyn Provost said the district council was out of its depth. Photo: RNZ

Ms Provost said the council failed to meet its fundamental legal and accounting obligations. It failed in its management, governance and documentation of the nearly $60 million scheme, making decisions on its funding in closed workshops instead of open meetings.

"On top of that, an independent reviewer identified problems with some of the audit work carried out by Audit New Zealand. For that, I apologise unreservedly to each and every one of you."

She said she was also unhappy to find some shortcomings in the way her office dealt with the complaints.

Ms Provost said that the government auditors relied too much on discussions with council management to evaluate the council's performance. She said she would not be allocating any new audit work to Audit New Zealand until she is satisfied that it can maintain consistent standards.

In 2006, the Kaipara District Council told ratepayers it would borrow $35 million to build the sewerage system. But the following year, it extended the loan facility and drew down nearly $60 million for an expanded scheme without consulting the community or revealing the debt. That was unlawful and made its sewerage rates invalid.

At least one ratepayer, retired lawyer Clive Boonham, spotted the illegality. But Audit New Zealand, which examines the council's accounts every year, did not and ignored his complaints.

The Auditor-General's report said the Kaipara District Council was out of its depth in managing the Public Private Partnership set up to manage the Ecocare waste-water system.

Lyn Provost said many of the council's systems were flawed, and work done by Audit New Zealand on the council's accounts between 2006 and 2009 was deficient.

Ms Provost later told Radio New Zealand's Checkpoint programme that the failures of the district council can't be repeated in the public sector.

"I expect people to do their decision-making in formal council meetings. We couldn't find the council minutes (and) found out that they were actually holding workshops based on power points and making decisions on that basis. That's not good enough.

"The lessons in this report are significant. There are lessons around governance, project management, record keeping. Everybody in New Zealand needs to at least read the lesson section of this report if they're in the public sector and learn from it."

Critics have said that the Audit Office should stump up for part of the debt burden that ratepayers now face.

The Auditor-General has commissioned a second report by an external auditor to investigate the Audit Office's performance.

Meanwhile, local government analyst Larry Mitchell, who used to advise the Kaipara council, said there is scepticism about just how deeply the Auditor-General has dug. Mr Mitchell said he was one of several people who expected to be interviewed for the inquiry, but were not.

A bill to validate Kaipara's rates is expected to pass its third reading in Parliament on Wednesday.

However Northland MP Mike Sabin, who sponsored the bill, said that does not absolve those responsible for the mess.

Mr Sabin said if Audit New Zealand failed in its responsibility, the onus should be on the Office of the Auditor-General to settle the cost or losses incurred by the council as a result of that failing.

That cost would be between $20 million and $30 million - the difference between what the council borrowed for Ecocare with consent and what it borrowed without consulting ratepayers.

The Auditor-General's report was tabled in Parliament on Tuesday.