Demonstrators have marched on the Prime Minister's house in the Auckland suburb of Parnell to protest against the GCSB bill. 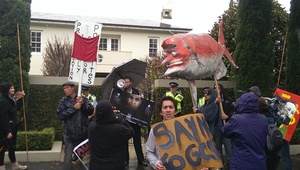 Demonstrators outside the Prime Minister's house in Parnell. Photo: RNZ

Legislation that will allow the Government Communications Security Bureau to spy on New Zealanders is currently before Parliament.

Protest spokesperson Nico Ward says the proposed changes will erode the freedom of New Zealanders and legalise a system of routine invasions of privacy.

He says Saturday's demonstration was to show that no one will go untouched by the changes, including the Prime Minister.

The bill will go back before Parliament this week.

Protesters carried a large papier-mâché snapper with a face designed to model the Prime Minister in reference to comments John Key made recently that New Zealanders care more about the proposed reduction to the snapper quota than the GCSB bill.