Nerves have been stretched throughout central New Zealand by a 6.6 earthquake and a series of aftershocks, one as big as 6.2. There have been no reports of injuries.

The main quake struck at 2.31pm on Friday, causing widespread damage in Seddon in Marlborough and cutting off State Highway 1 access to the township to all but emergency services, as well as rail access.

The New Zealand Transport Agency has closed SH1 between Kaikoura and Blenheim because of cracks in the road and slips. It is also checking bridges.

View a gallery of images 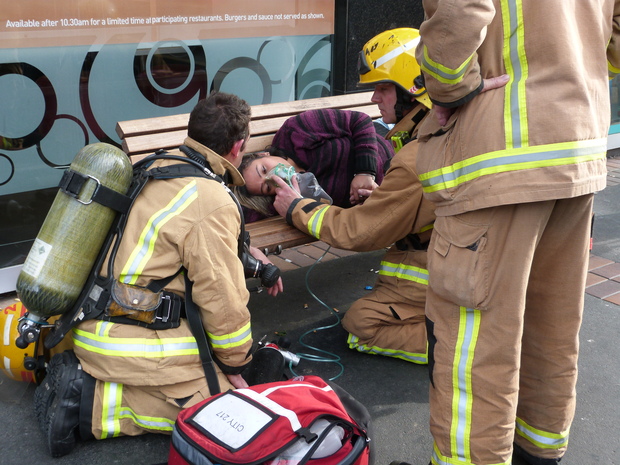 A woman being attended by fire fighters opposite Wellington railway station. Photo: RNZ

The prolonged shake set tall buildings swaying in the capital and forced office workers to shelter under desks.

The town hall and other buildings in the CBD were evacuated and hundreds of people converged on open spaces, some in tears, seeking safety away from high-rise structures.

Seismologists believe there is a chance of another earthquake greater than magnitude 6 hitting the centre of the country in the coming days.

GNS Science duty seismologist Caroline Little says the aftershocks will taper off but are likely to be felt for some time yet. Ms Little says the probability of a large quake drops as time goes on.

She explained how the first big quake was originally recorded as measuring 6.2 on the Richter scale before being revised up to 6.6.

"We have an automated earthquake system now, so as soon as the first set of earthquake waves come in it starts analysing them and locating the earthquake and it gets a depth and a magnitude and a location. And as more data comes in, it makes another analysis ... and so that's how it refines the search and refines the magnitude and location and finally it gets reviewed by a seismologist."

Ms Little says the earthquake is likely to have been on a different faultline to that last month.

Another GNS seismologist, Kelvin Berryman, told Checkpoint that because the latest quake was closer to land and to Seddon and other small towns, it was felt more strongly.

Significant shakes were also recorded near Taihape, Levin, Waverley and Turangi. The main quake was felt as far north as Auckland and as far south as Christchurch, where it was described as a long, wobbling sensation.

In Hawke's Bay, the 6.6 quake was felt strongly with Radio New Zealand's reporter in Napier saying it felt like being in a boat in rolling seas. 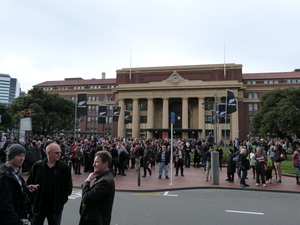 It says all tracks have been inspected, with no reports of damage.

After the quake, KiwiRail stopped all trains so tracks could be checked. Buses could only be provided for people already on trains and at Wellington railway station.

Other rail commuters had to find their own way home, with many walking along the path parallel to the tracks to Hutt Valley.

Wellington Railway Station was closed for an engineer's inspection but has not sustained any structural damage. It will reopen on Saturday morning.

Wellington buses continued operating, with delays due to the traffic.

Central Wellington roads were clogged as drivers tried to leave the city and motorways were also heavily congested.

NZTA is making structural checks of all highways, bridges and tunnels in the Wellington region but said known roading damage on Friday was restricted to Manners Mall, Cuba Street and Featherston Street, where broken glass was on the streets.

The agency asked people to avoid the central business district on Friday, as did Wellington City Council. Lower Hutt City Council also made the same request.

Highway manager Marlborough roads Frank Porter says the agency will re-assess SH1 and its bridges in the province on Saturday morning.

"The safety of our customers is our number one priority," he says. "The road has cracks in it and there is debris on the road from numerous slips and rock falls, which will make driving along the highway at night hazardous."

Motorists and other road users were advised to take extreme care if they had to travel on other roads in the region.

The NZTA traffic operations centre at Johnsonville, in Wellington, monitored the highways and transport network in Wellington and Blenheim.

Wellington Airport was briefly closed while the runway was inspected.

Power was back on for all but 100 Marlborough homes and businesses on Friday evening.

Marlborough Lines estimates 4000 homes and businesses in Blenheim and surrounding areas were initially without power after five of 16 substations tripped.

Wellington Electricity says power is restored to all 2500 properties that lost electricity in the region.

Telecom says there was some disruption to phone services and the Fire Service was called out to people stuck in lifts, or to automatic alarms going off, in Wellington and Hutt Valley.

Emergency management offices were activated by councils in Marlborough and Wellington.

Radio New Zealand staff member Vicki McKay says she was driving down Courtney Place when her car began rocking and she first thought she must have a flat tyre.

"Then I saw people start to move and run into the middle of the street, not frantically but they moved very quickly and a couple of people held onto traffic lights," she says.

Another staff member, Kent Atkinson, was planting trees on the steep hillside below his Brooklyn home and says it was difficult to stay upright as the slope rolled with the shocks.

Children at Clyde Quay School in the Wellington suburb of Mount Victoria had just ducked under their desks for an earthquake drill when the quake struck.

School office manager Helen Burnet says most of the 247 children stayed calm while they were then evacuated to the hall.

She says some of the students even wondered if the quake was a special effect created as part of the drill.

The New Zealand Stock Exchange stopped trading for almost an hour because of the quake. The New Zealand dollar dropped about a third of a cent against the US after it but has since regained a little.

GNS Science says the earthquake produced about the same level of shaking as the quake near Seddon on 21 July. It was 14km deep.