Office workers are more satisfied in their jobs than non-office workers, according to a new survey. 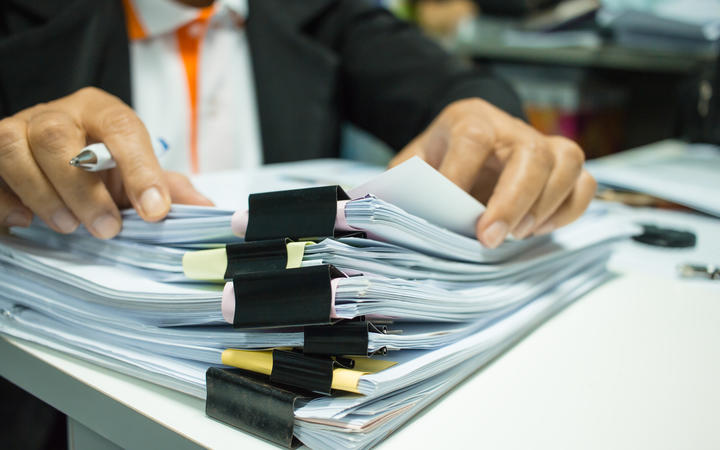 Stacks of documents in an office. Photo: 123RF

Skills Consulting Group's Work Wellbeing survey of about 1600 staff and human resources managers put health workers, teachers and tradies at the top of the list of those most dissatisfied with their workplace.

Non-office workers such as production workers, retail staff, drivers, nurses, tradespeople and teachers had an overall wellbeing score of 59 percent compared with 65 percent for office workers.

Across all measures, non-office workers rated their employers lower.

An industry breakdown showed healthcare workers scored wellbeing at 56 percent, followed by construction and trades at 57 percent, with education, retail and agriculture workers at 58 percent.

"This is really compelling data."

"More personalised tools, more check-ins to ensure those who work outside or in a different way to a conventional office still feel part of the team ... those are just some of the ways that businesses can really begin to make an impact."

The survey also showed non-office workers had higher expectations, such as a desire to feel worthwhile in their job, to feel as though they were part of a family, with a caring culture, and polices that look after wellbeing.

"This is possibly because those who work in an environment different to an office ... are less likely to have direct support from their manager or as many interactions with their team on a regular basis," Kennelly said.

"They are often likely to be working on their own so can feel isolated, and don't have that sense of having a 'work family' or tight team around them for regular support."