The New Zealand dollar has been dragged down by its Australian counterpart today as Brent crude oil prices fell 6 percent to new four-year lows below $US72 a barrel. 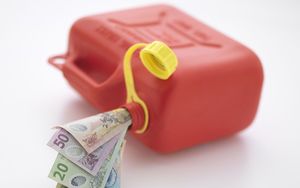 "That's seen a number of the Australian oil producers get hit pretty hard today in Sydney ... that's had a pretty negative effect on the Aussie equity market, which in turn has kept the Australian dollar on the defensive, and that in turn has seen the Kiwi dollar struggle on the day as well."

Meanwhile, the New Zealand sharemarket was also lower, with the benchmark Top 50 Index down 31 points to 5424 at the close of trade.

The head of wealth research at Craigs Investment Partners, Mark Lister, said the drop in oil prices was also felt in the local market.

"The biggest story of the last 24 hours has been oil prices which fell 6 percent overnight, or thereabouts, and are now down more than 30 percent since late June.

Mr Lister said the New Zealand market was holding up, given that it did not have a lot of resources stocks, but the likes of New Zealand Oil and Gas was down.

"There hasn't been a lot of corporate news. We've seen Pacific Edge rally another 6 percent after a couple of positive announcements of late and the half-year result today.

"Air New Zealand also is quite strong and obviously with fuel prices being a key part of their cost structure, any fall in the oil price or the fuel price is quite positive for them."