Mainfeight said the result included a one-off gain of more than $12 million from last year's settlement with the vendors of its Wim Bosman operations in Europe. 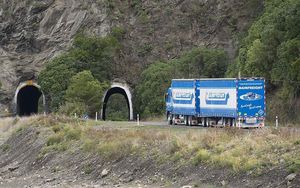 The result was better than expected and shares rose nearly 9 percent in morning trade on Wednesday.

The company said operating profit rose 8.5 percent to a record in the year ended March and, if the impact of the strong New Zealand dollar was removed, the increase would have been nearly 11.7 percent.

Mainfreight said all its geographical segments improved their operating profit compared with last year with the exception of Europe, which was down 5.6 percent for the year.

However, second-half operating profit in Europe improved nearly 18 percent and the company said that improvement has continued into the new financial year, giving it confidence those operations have turned around.

The Wim Bosman operation has lost more customers than expected after Mainfreight bought them in 2011.

Mainfreight said trading across the group for the first two months of this year has continued strong so it is confident of an even better performance in the year ending March 2015.

No resting on laurels

Managing director Don Braid said the company had no intention of resting on its laurels, and that the company needed to lift the quality of service in its domestic Australian operations.

"I think that we could do better. We've improved our quality over the last five years and by our own standards we could do even better," Mr Braid said.

"I think as we continue to get that quality, which we're very capable of being able to do, I think the chance of increasing our market share is very real."

The American arm of the operation had performed less than satisfactorily but that was its own fault, Mr Braid said.

"I just don't think we've grown that domestic business quickly or aggressively enough, by our expectations, and the opportunity in front of us.

''We've a very small player in the US market with lots of opportunities in front of us and our business, it needs to improve its sales capability to increase the market share."

Nevertheless, Mr Braid was confident of producing an even better result next year.

"So we've got a reason, I guess, to be a bit more upbeat than we were this time last year.

"Certainly we're not shy of the amount of work that it'll take but we feel confident of where we're going."

The company had come a long way but it still had a long way to go, Mr Braid said.