A panel discussion about contemporary literature dealing with the First World War involving Harry Ricketts, Kate Camp, Jane Stafford and Matt Elliott. The conversation includes generous readings from Birdsong by Sebastian Faulks, Regeneration by Pat Barker, The Stone Carvers by Jane Urquhart, and the diaries which inspired Nice Day for a War by Matt Elliott.

How we remember World War I today 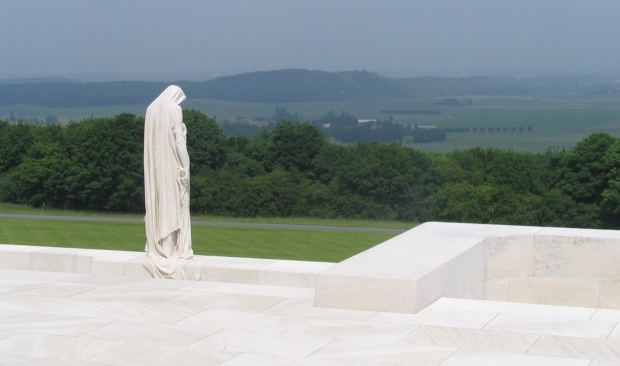 The Canadian National Vimy Memorial in France: The creation of this striking memorial is explored in The Stone Carvers by Jane Urquhart. Designed by Walter Seymour Allward, and located on Vimy Ridge, it recalls the sacrifice made by members of the Canadian Expeditionary Force who lost their lives during the First World War. The austere abstraction of the design is softened by statuary, including the figure Mother Canada looking out over the plains surrounding the memorial, mourning her dead.

For award-winning biographer Matt Elliott the issue of remembrance of World War I has a personal resonance, as his grandfather’s diaries relate the experience of a teenager who fought at the Western Front. He used those diaries in creating his graphic novel Nice Day for A War, but he thinks that insight into what his grandfather’s generation went through is pretty rare.

“We reached a stage where we suddenly realised we only had a few veterans left. And we wanted to get the stories of these men. But the thing was that millions of men who had served on all sides, didn’t want to talk about their experience, which is a really telling thing about the First World War. They couldn’t talk about it, because they were so affected about it, they didn’t feel they could talk about it because they didn’t think the people they could tell could relate to what they had been through, so the story wasn’t being told until these men were much older.”

Elliot pays tribute to the work of Jane Tolerton, who interviewed New Zealand veterans when they were elderly, some in their nineties. By then, he says, they were ready to talk about it: “But the fact that it took so long for them to share their memories really puts into perspective what that whole horrific episode was all about.”

Discussing recently-written fiction which is set in the First World War, writer and poet Kate Camp cites the power of Sebastian Faulks’s Birdsong: “There’s an awful scene where they have had the end of shelling. And everything goes quiet. As night falls, the men start to drag themselves out of the mud, and come back to their own line, and he says they were all moaning at once and ‘it was as if the soil itself was making this sound. The sound rose like damp winds scraping up and down a sky of glass.’ And when I read that it I thought wow, it’s so evocative.”

However, on reflection, Camp doesn’t think that description – damp winds scraping up and down a sky of glass – makes any sense at all. “None of us know that that sounds like,” she adds, “but for some reason, it’s almost as if in his attempt to describe the indescribable, he’s reaching for another image which in itself is indescribable as well.”

To hear more reading from and discussion about some remarkable literature, listen to this programme, the final in the World War I Book Club series, broadcast on 26 October 2014.

The fact that it took so long for them to share their memories really puts into perspective what that whole horrific episode was all about.

The Last Veteran: Harry Patch And The Legacy of War by Peter Parker

Empires of the Dead: How One Man's Vision Led to the Creation of WW1's War Graves by David Crane

The Children's Book by A. S. Byatt