‘Prison provided social benefits: it hid our failures from view’

During his lecture, Kim Workman explores what a new justice system built on the principles of restorative justice might look like, and how it would better serve Māori. After exploring the nineteenth-century history of his iwi’s involvement with law and government, he continues with family reminiscence:

My father recalled an early idyllic early childhood in which on the weekends, he would accompany his father in a walk from Greytown, across the fields to Papawai Marae. They would always walk through Mr Tait’s orchard, where his father would ‘borrow’ a bag of apples from Mr Tait’s apple trees, and then present them to the marae as a koha. There would be much political discussion and debate, and the sharing of kai, before they departed homeward. 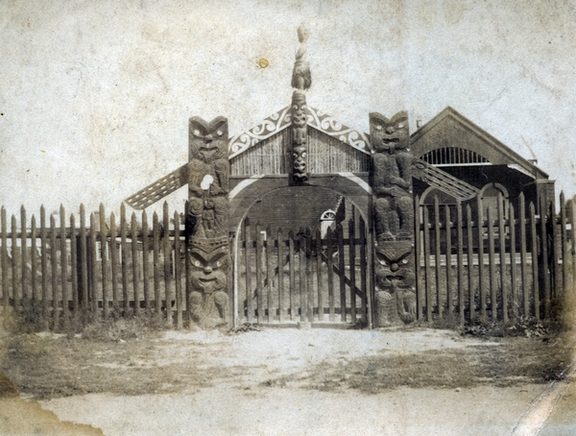 Around 1915 things changed. There was a major family dispute over how the children should be raised, and his pākehā mother considered it not in the family’s ‘best interests’ to connect closely with their Māori relatives. Visits to the marae stopped, and while our Māori connections were acknowledged, they were not actively embraced again until the 1950s.

My own recollection of the 1950s and 60s was one of cultural confusion. Although largely stripped of Māori cultural understanding by the 1950s, our whānau nevertheless responded to family and social relationships, in a way more aligned with tikanga Māori than to the ways of our pākehā neighbours.

It was almost as though the whānau over generations, developed a set of values and mores which were neither Māori nor Pākehā, but a subset of both. Four generations of mixed descent marriages, contributed to an open acceptance of people of difference and diversity, and a keen sense of what did or did not constitute justice. The partners and spouses of my own children include Maori, Irish Catholic, Greek Orthodox, and Lebanese Muslim.

In the 1950s and ‘60s, marae committees in the Wairarapa would take pride in having a pākehā farmer on their committee – they were always good for providing a couple of sheep for a tangi. But there were too many other signs to suggest that these relationships were more often about white patronage than mutual equality and respect.

Pākehā routinely jumped the queue at shops, while Māori patiently waited to be served. Māori were excluded from membership at the local Workingmen’s Club until the 1960s. Māori children who were abused or neglected were whisked away from their whānau by Child Welfare Officers, often never to be seen again. 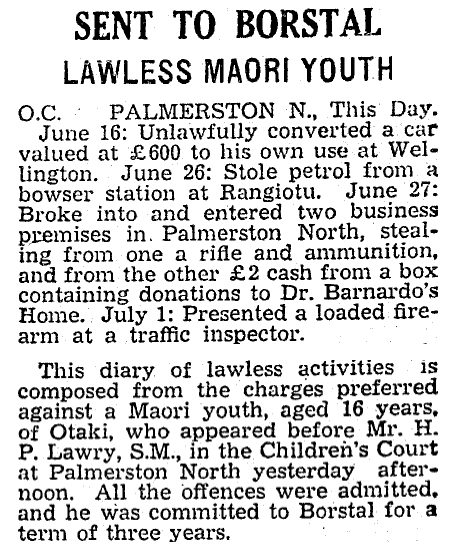 As Māori society began to disintegrate, the justice system mopped up those who were deemed a public nuisance. In the 1930s Māori “lads” were sent off to borstal “in their own interests” because they were judged to have come from bad surroundings – a practice since taken over by youth justice institutions.

In 1902, Māori constituted 2.8 percent of all prisoners received – by 1934 that number had risen to 8.9 percent. Prison sucked up all types of offenders from the lower strata of society: the small time repeat offenders, drunks, vagrants, the mentally ill, and so on.

By the 1930s, while New Zealand had very little crime, it had an average prison population three times greater in proportion to the general population than that of England and Wales.

Prison provided social benefits: it hid our failures from view; it allowed politicians and the courts to maintain public credibility; it satisfied a public demand for retribution. New Zealand had become a punitive and mean-spirited society.

The impact of the Māori urban migration of the 1950s was predictable. Between 1954 and 1958, reported Māori youth offending rose by 50%. One of the factors that caused this increase related not to how Māori behaved in this strange and new urban world but how they were treated by non-Māori. Māori urban migrants were perceived and treated as a potentially dangerous underclass. We were outsiders.

The police, like much of the public service in the 1950s was unapologetically monocultural. In 1951, the Police boasted one Māori police officer, Bill Carran, who had joined the police in 1920, and retired in 1958, as an Assistant Commissioner. Carran, of mixed descent, was referred to disparagingly as ‘the Black Tracker’ by his colleagues, and survived by downplaying his Māori heritage, and emphasising his pākehā side.

When Commissioner JB Young canvassed his staff in 1950 about recruiting Māori , he found them ‘almost unanimously opposed’. The Senior Sergeant at Taihape commented:

The average European would strongly resent being corrected or reprimanded by a Māori, particularly in some districts where the colour line is still observed. On the other hand, the average Māori appointee would be inclined to suffer from an inferiority complex when dealing with Europeans, or be imbued with authority and fail to use discretion when dealing with Māoris.” 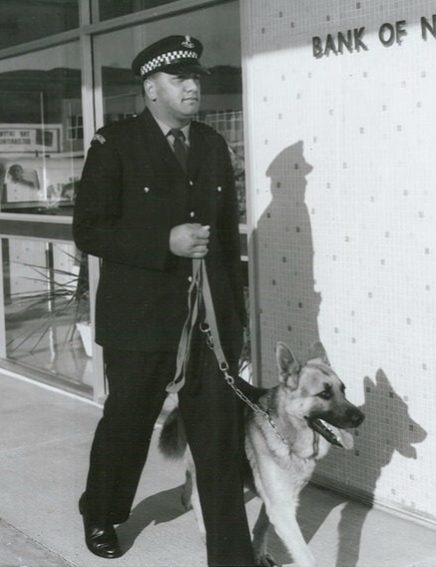 Other officers appealed to common stereotypes that Māori were too lazy or too subject to tribal pressures to enforce the law impartially. It was not until 1955 that Sam Barnett, then Controller General of the Police, reserved 25 of the first 100 places at the newly established Police Training School, for Maori, and sought recruiting assistance from the Department of Māori Affairs.

By the time I joined the police in 1958, there were 23 Māori in the police, but we made little impact. A ‘war on crime’ was being waged, and Māori youth were the enemy. Election promises to increase police numbers became a standard political strategy, and continues to this day.

The 1961 Hunn Report confirmed that Māori were more likely than non-Māori to be imprisoned, sent to borstal or placed on probation, less likely to have court cases dismissed, and more likely to be committed to the Supreme Court for trial.

Sir Jack Hunn raised the issue with the police, justice and welfare authorities, and the Secretary of Justice convened a meeting to discuss the matter. The meeting reached an impasse, when the magistrates and probation officers strongly asserted that there was no problem.

Those concerns persisted over the years, and despite the abundance of evidence pointing to an unfair and unjust criminal justice system, attempts to engage the state in addressing underlying issues of racism since then have been diligently avoided.

The restructuring of the public sector in the 1980’s, and the introduction of neoliberal policies promoted political and public support for aggressive control of a marginalised underclass perceived to be disorderly, drug-prone, violent and dangerous.

Offenders were no longer people in need of support, but risks to be carefully managed. Prisoners became objects rather than subjects. What evolved was not a system of justice, but a system of punishment.

A profile of Kim Workman

Kim Workman on crime in Auckland 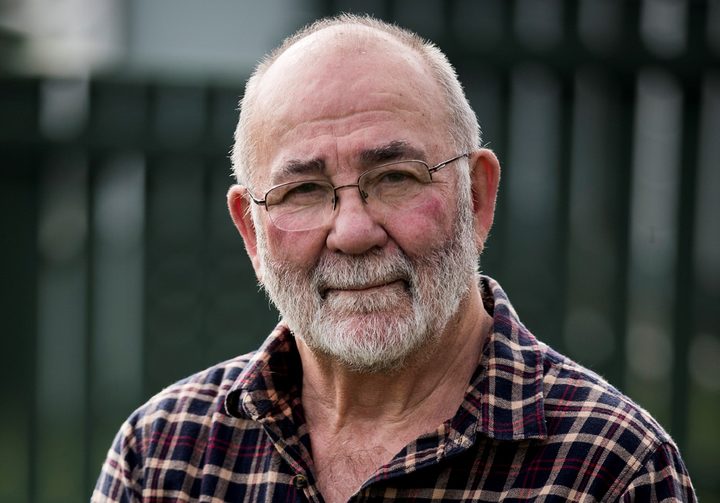 Kim Workman (of Ngati Kahungunu and Rangitaane descent) is a retired public servant, whose career spans roles in the Police the Office of the Ombudsman, State Services Commission, Department of Māori Affairs, and Ministry of Health. He was Head of the Prison Service from 1989 – 1993. He is a graduate of Massey University, and has completed post-graduate study at the University of Southern California, and Stanford University. He completed a Post-Graduate Diploma in Religious Studies in 2011.

In 2005, Kim was the joint recipient (with Jackie Katounas) of the International Prize for Restorative Justice. In 2006 Kim joined with Major Campbell Roberts of the Salvation Army, to launch the “Rethinking Crime and Punishment” Strategy, and the establishment of ‘Justspeak’, a non-partisan network of young people speaking up for a new generation of thinkers who want change in our criminal justice system. That project now comes under the Robson Hanan Trust, of which Kim is a trustee.

Kim was made a Companion of the Queens Service Order in 2007. He served a three year term as Families Commissioner from 2008 – 2011.

Kim was a Semi-finalist for the 2013 Kiwibank New Zealander of the Year Award, and a finalist in 2018.

In 2013, Kim accepted a position as Adjunct Research Fellow at the Institute of Criminology, Victoria University of Wellington.

In 2015 Kim was awarded the John David Stout Fellowship at Victoria University, writing a book on the development of the criminal justice system in New Zealand. Criminal Justice, the State and Māori, from 1985 to 2015 documented the history of Māori in the criminal justice system and examined the relationship between punitiveness and neoliberalism.