Claudia Kogachi - There’s No I in Team

Artist Claudia Kogachi talks to Kadambari Raghukumar about what it's been like exploring her personal family relationships and dynamics through creative work. 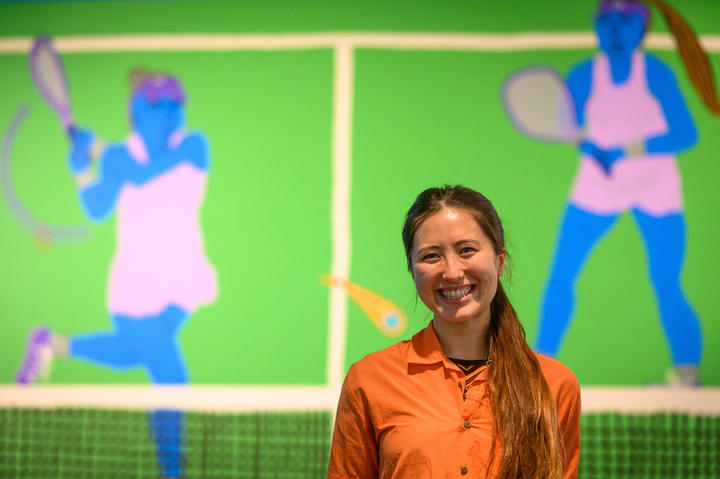 It's mid-morning and Claudia Kogachi is busy wielding her carpet gun in her home studio in Eden Terrace. In her overalls, she's switching between painting and carpeting, while a deadline looms for a show coming up.

She's working on a series of painted portraits of her and her mother called "There's no I in Team" - the show opens this week in the Dowse Museum at Lower Hutt. She's racing to complete the works and also finishing up some smaller rug works this morning.

Bold, blue and blobby, the There's no I in Team series is her take on her relationship with her mother. These new works explore the complex dynamic between mothers and daughters depicted through sports and activities they shared while in Hawaii, through slightly awkward and cartoonish figures.

It follows an earlier series that showed them competing in different sports.

Claudia is Japanese-Kiwi with a couple of generations on her mum's side being raised in Hawaii. "They went there to work in pineapple fields from Japan. It's the only place they call home and for me it's a really special place."

Claudia went to university in Hawaii and considers herself lucky to go between New Zealand and Hawaii each year. She clearly holds close her relationship with Hawaii and her relatives there and an online catch-up with her baachan, Japanese for grandmother, seems due every day. 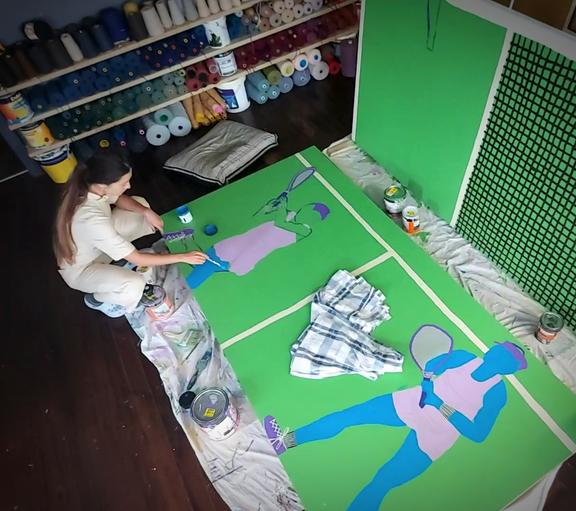 Her baachan features heavily in her art. "She's one of my best friends. Since I can't be there with her, it seems only fitting that I include her in my art."

Some of Claudia's rugs - bold, chunky and about 2 metres long by a metre and a half wide - depict her grandmother in different domestic scenes - lighting a barbecue, rummaging through her fridge with hair-rollers and pyjamas, while some feature Claudia herself, in imaginary alternative careers - landscape-gardening and the like.

At Visions Gallery in downtown Auckland, her rug series has almost sold entirely.

Making the rugs though came about through sheer necessity and lockdown resourcefulness. Carpeting guns and yarns were available online and she needed to create a line of works for a show that had been slated for July 2020. Rugs provided the answer.

"The gun is about 3kgs heavy and after a month of working a piece, your arm is definitely painful. I can see myself making rugs in the future but I need a long break to recover from it ... that's why I guess I'm painting now." 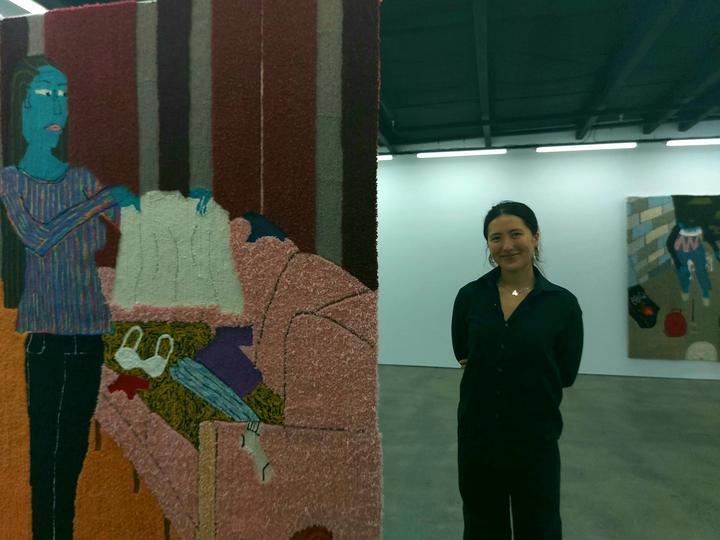 Her work is undeniably tempting to touch.

"I actually encourage people to touch them because that's what I tend to like to do when I see some art I really love. I guess it makes it more accessible to a wider audience."

There's no I in Team runs at the Dowse Art Museum till October this year. 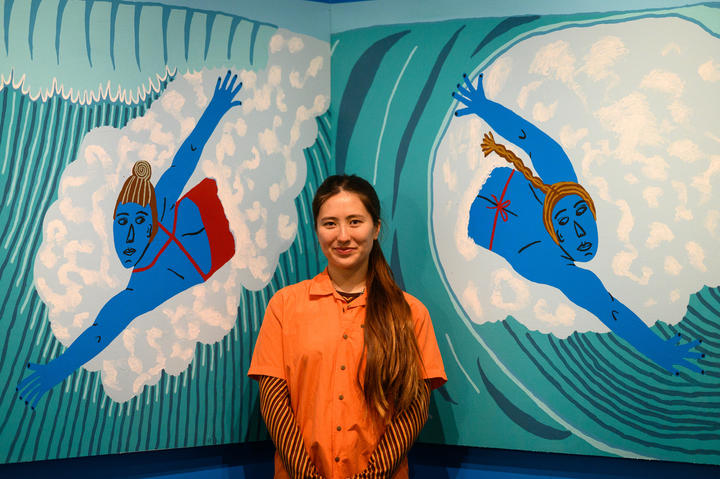 Claudia Kogachi at her show 'There's no I in Team' at the Dowse Museum. Photo: 2021 Mark Tantrum