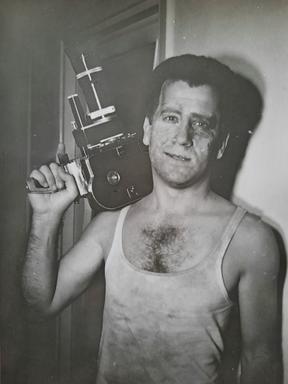 With his 16mm Bolex, straight after returning from filming the air-strikes by Israel on Jordan, 1967. Photo: Tuma Hazou

The idea for Tuma Hazou's book Dances with Death, was born on a Christmas dinner a few years ago while poring over old photographs with his sons. Among them was a picture of him with 16mm Bolex, injured and with a blood-stained forehead.

His brother insisted on taking the image when he came home after narrowly dodging death while filming during an air-strike in 1967 Jordan-Israel war.

With a bit of persuasion from his wife and children, Tuma began recounting and documenting all the incidents in his long journalism career where he had similar near-misses during the war and hostilities in Jordan, Palestine and Israel. There were several.

Tuma was born into a Syriac Christian Arab family in Jerusalem in 1938. His family, along with thousands of others, became refugees after the first Arab-Israeli war of 1948.

Tuma became one the youngest journalists with BBC Arabic at the age of 22 and spent most of his career covering the Israel-Palestine conflict.

His first book "Dances with Death" was launched this month in Auckland, and is a vivid and detailed description of what he witnessed and experienced, not only as a journalist but also as a Palestinian. 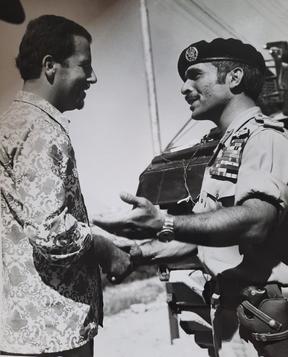 Tuma and the late King Hussein of Jordan, standing on top of a tank, 1967 Photo: Tuma Hazou

Today, 85-year-old Tuma lives in Auckland with his Kiwi wife Virginia, who he met in Jordan in 1968. Virginia at the time was working for King Hussein as a nanny for his twin daughters.

"He was a handsome man. Whenever we toured the country in Jordan, people would look at him and ask if he was the Tuma Hazou - they all had radios and had heard him," Virginia said.

It will be 50 years next March since the pair met and they have shared a lifetime across two different continents and very different worlds.

Tuma is relieved to have finally finished and launched the book after a long lockdown.

"I hope it serves a purpose - I hope it will shed some light."