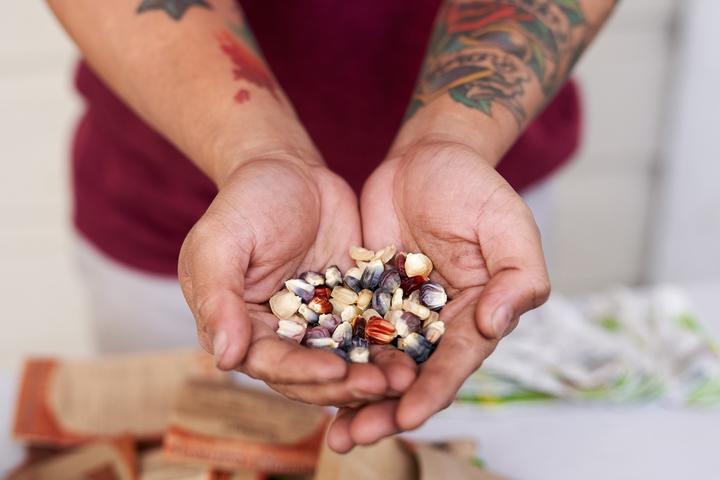 "When I started growing, it was crazy how my neighbours started reacting. I started to make a lot of friends with them. I had passersby saying thank you for growing these sunflowers!" I had 30 sunflowers extending their heads over the fence at one time."

That in a nutshell pretty much sums up Charles Buenconsejo's attitude in life - both in his garden and outside.

Charles and his wife Grace - who he says is his 'first garden', moved to New Zealand four years ago. Settling in was far from easy for the couple. Struggling to find work while making do with low-cost, cramped accomodation shared with neighbours who ranged from ex-prisoners to prostitutes, gang members, addicts and struggling migrants all in the mix, was an anthropological insight, as Charles calls it. It was a rough landing into New Zealand that was a result of a Google search that pointed them to the cheapest accomodation in Auckland - which in hindsight Charles describes to have felt more like a 'correctional institution". It was a picture they hadn't quite seen in the brochures they were given in Manila about migrating to New Zealand. 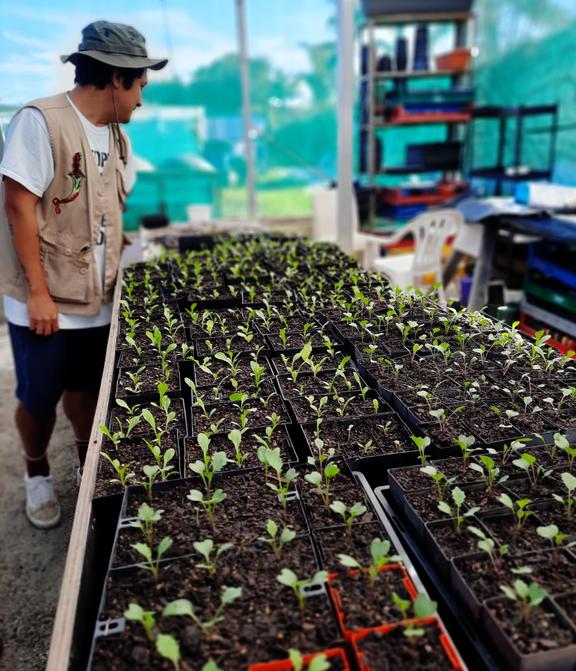 It was after while when they slowly started saving some money and made some contacts that they eventually moved to a home in a suburb in west Auckland. A home with a backyard. But a shadow of cultural dislocation and depression followed Charles. Unable to find work, trapped at home while the building sites next door drove him further into his isolation and sense of displacement. He found himself caught in a vortex of Youtube algorithms that peddled fear of a "dystopian future". Working as a self-employed artist and photographer, each day became a hustle to find work.

Charles came upon Stone Soup, a community run magazine by Aaron Mclean - an ardent advocate of connecting community through food, a passionate gardener and a photographer himself. The two became friends quickly. Aaron spoke of the ideas of 'changing the algorithm' and learning how to 'engineer paradise' simply by getting out and getting one's hands dirty by planting.

"The first time I went to Charles' place to help him dig up his garden, he came out a in a jumpsuit" says Aaron. Never having really gardened before Charles was clearly over-prepared. But not before long, Charles discovered that his sense of community, belonging and purpose lie in getting his hands dirty in the soil. "Aaron's like a brother to me...I don't know what I would have done if I hadn't met him."

A year later, today, his garden is a thriving oasis with vegetables and herbs of all sorts grown fully organically.

"Gardening is the antidote to all your suffering, the soil heals you. It healed me." 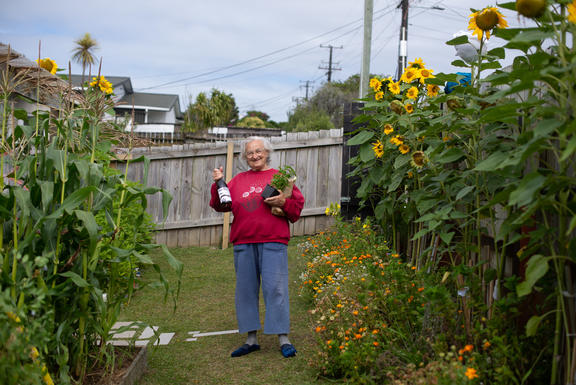 Growing up in Cebu, Phillipines, Charles recalls abundance - fruit trees, rivers, gardens. But as he moved further from rural areas to the city, like rural to urban migrants do he grew more disconnected from growing culture, pursuing a notion that he could "run from his provincial-backwardness".

Moving to New Zealand has in some way helped him recreate a slice of his childhood but rooted strongly in this new community he has found here. "We've always had that connection to land and growing..but like but many colonized countries, even in the Phillipines it's often seen as a sign poverty to grow your own food..you're not affluent enough..years of being colonized has made us think farmers are lowest of the low.. and dark skin associated with being in the sun is looked down on.

But now, I wash my hands in soil." 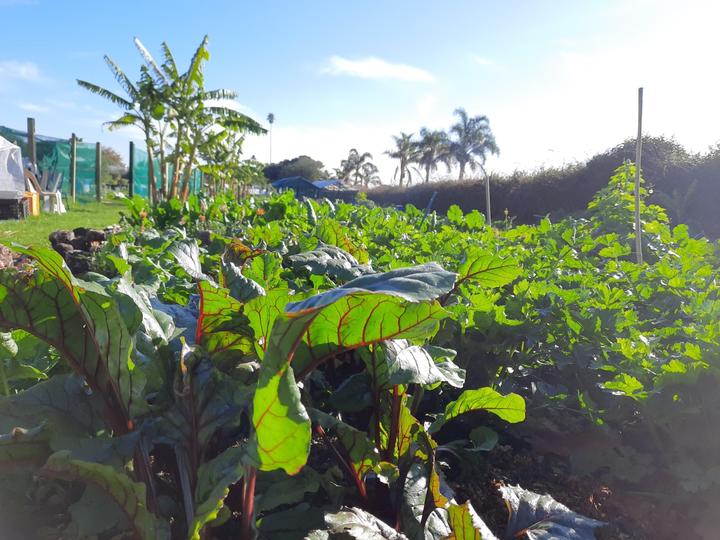 "I recognize my privilege - not all immigrants can do this. The only reason I could is because I met Aaron and my wife also supported me through this... and I have some space and time. Hell yeah, I recognize it's a privilege. But that's why it should be made more accessible to everyone." Speaking of the landless, the depressed and the addicted, "teach them to farm" he says "it will empower them." 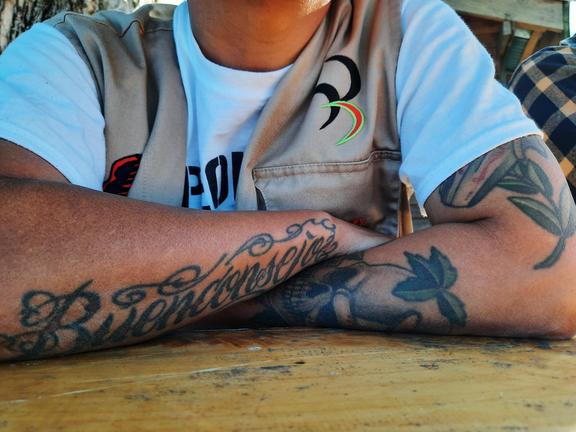 "Why would you grow food if you can't share it. I have surplus here, all my neighbours get some of my harvest, seedlings, worm fertilizer."

He gets bottles of marmalade in return, a chicken curry some days, and a lot of smiles and waves. His home is full of fermenting produce in jars, stacked containers full of dried seeds, books on soil biology, regenerative gardening and food sovereignty.

"There's no scarcity. There can be a culture of abundance if you can grow" he says with his infectious laugh.

At the Papatuanuku Kokiri Marae gardens in Mangere, Charles is propagating more seeds he saved in his home garden. Here Charles has been volunteering his time helping the community garden while practicing all that he's been learning in his utopian garden at home.

"From that jumpsuit, to this, the kai mahi of this land".

He speaks fondly of his new allies in the community - from Aaron to Lionel Hotene who leads the growing efforts and the WOOF programme at the marae farm.

Te ao Māori and the kaupapa here of feeding the community, teaching people how to grow and encouraging diversity both in the soil and above is something that continues to resonate strongly with Charles. "It resonates with how my people back home are as well."

Outside his house, the box of koha vegetables is popular. In between two boxes is a whiteboard that quotes the activist and writer Raj Patel - "The opposite of consumption is not thrift, it's generosity."

Check out more images on Charles and his new allies: 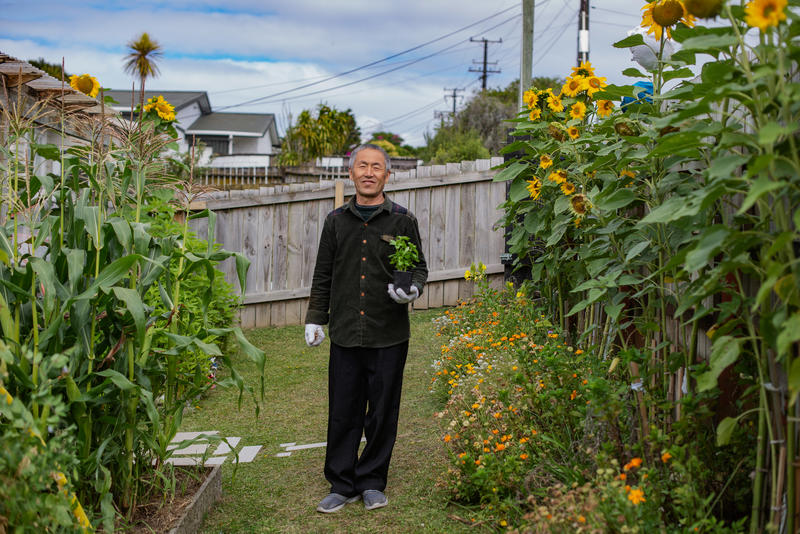 Charles' neighbour whom he befriended after giving him a tour of his home garden. Photo: Charles Buenconsejo 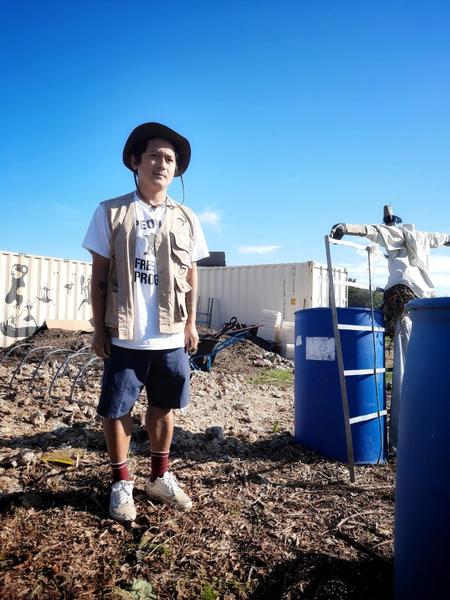 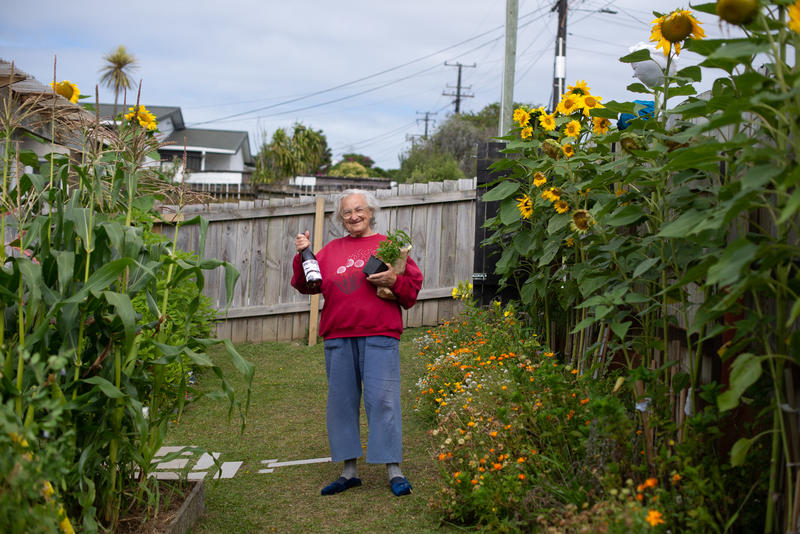 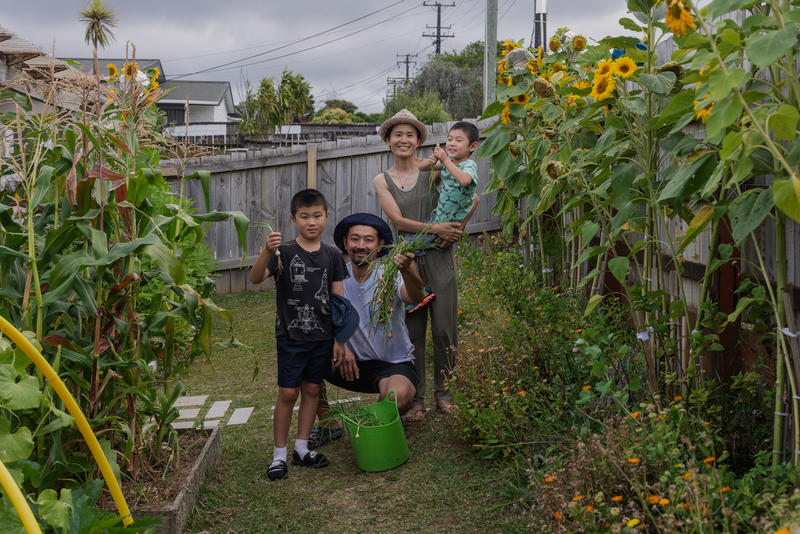 "Why would you grow food if you don't share it?" Photo: Charles Buenconsejo 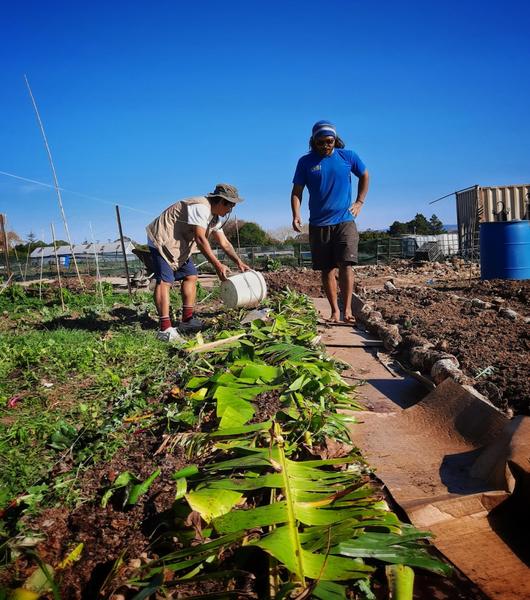 Charles and Keanu, using buckets at a time of water scarcity when using a hose could attract a fine of $20,000. Photo: Kadambari Raghukumar 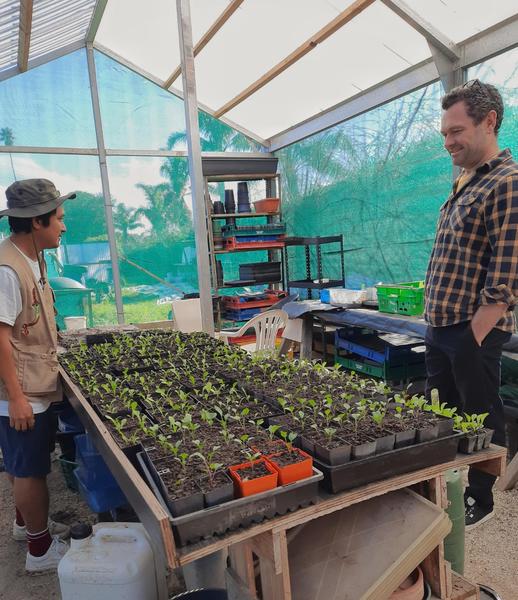