The legacy of the Girmit

'Girmit Day' is marked on 14 May each year by the Fiji Indian community in New Zealand as a day to reflect on their shared past - the British colonial indenture system in Fiji. It's also a day that celebrates the birth of the community's identity and their uniqueness as a diaspora.

The years between 1879 and 1916 saw over 60,500 people transported on ships to work on plantations in Fiji. On board these ships were men and women from India lured by promises of a better life - one which they were told by recruiters, lay at the end of a short journey. Many were recruited from so far inland in India that they'd never seen an ocean. Most were poor farmers who left drought and hardship hoping to return home to their villages in India after a while.

The first of these ships, The Leonidas, docked in Fiji on 14 May 1879 - the short journey the emigrants were told about turned out to be a long and arduous journey across continents.

Over the following years ships specifically fitted out to carry large numbers of human cargo plied the route regularly. Labourers were taken to the Indian ports of Calcutta and Madras from where ships left. The Indians that went to Fiji were among the several thousands who travelled from British India to work on plantations in the Caribbean, islands in the Indian Ocean, Guyana, South Africa and Malaysia amongst other colonies over a period of about 100 years, starting from 1833 when slavery in the British empire was abolished. The indenture tenure system was to make up for the loss of labour caused by the 1833 abolition. 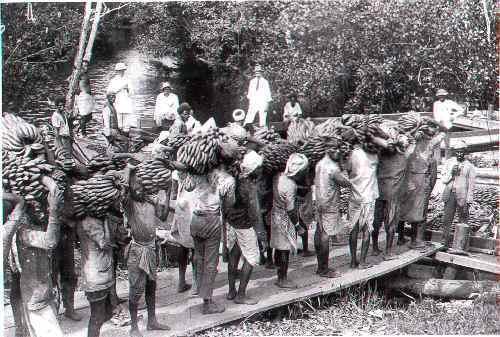 The Indian workers under contract came to be known as Girmitiya - a Hindi take on the the word 'agreement'. The workers were bond to a five year agreement, the Girmit, which was extendable. On finishing five years, they were permitted to return to India at their own expense, or serve ten years and return at the expense of the British colonial government. Some people returned at their end of the indenture but most stayed back as they either couldn't afford the journey back or lost virtually all ties to their homes and families in India and stayed on.

Life on the plantations was cruel - mistreatment was rife and living conditions were harsh. First-hand accounts both oral and written, as well as songs called 'bidesiya' in Fiji Hindi composed in those years lament the loss of their homeland, displacement, deceit and the harshness of life as workers on the plantations.

The last ship to carry workers to the the Pacific was in 1916 but it was only on 1 Jan 1920 that the indenture system was officially abolished and the last of the Girmitiya families were released from their indentureship.

This year marks 100 years since the abolition.

This May in Auckland, there was to be a large event as a commemoration but that had to be cancelled with the coronavirus lockdown.

After last year's big event marking 140 years to the day the first ship from India arrived in Fiji, the community began to look into ways they can advocate around an important and core challenge for them - their identity as Fiji Indians.

For a people who were displaced from their homeland over a century ago, holding on to their culture as a minority while adapting to and celebrating that of their home in the Pacific, Fiji, was never an easy task. Even today, it appears to continue to present the community with unique challenges here in New Zealand. The 1987and 2000 coups saw large waves of Fiji Indian immigration into New Zealand. Krish Naidu, the President of the Fiji Girmit Foundation NZ arrived here as a result of the 2000 coup. He has been delving into the subject of Fiji Indian identity from a census data point-of-view since a few years. "We're missing out on effective data collection" he says in regards to access to education-related New Zealand scholarships, public health policy and more.

Caught between sometimes identifying as ethnically Asian or Indian versus their Pacific identity given that Fiji has been their home for 141 years, the identity tightrope majority of the community walk is often times tricky. Their migration history - India to Fiji and subsequently Fiji to New Zealand and the rest of the world, gives rise to particular challenges that are unique to them and being categorised as one or the other appears to have big implications.

According to Kirsh Naidu, accurate data collection around identity and census affects intervention and policy efforts to support his community. Mental health issues, supporting at-risk youth or domestic violence in the community in New Zealand are just some examples of where a more nuanced approach are key for Fiji Indians and many immigrant-origin communities. Krish says "the community also have a responsibility in this process."

This year Girmit Day in Auckland will be marked by families at home as they reflect on their ancestors' painful past but also celebrate in their own ways their unique language and culture that have somehow stood the test of time and distance all the way in the South Pacific starting from 1879. Meanwhile, the advocacy for a census 'checkbox' that is more nuanced and suited to the community, continues through the efforts of people like Krish Naidu.