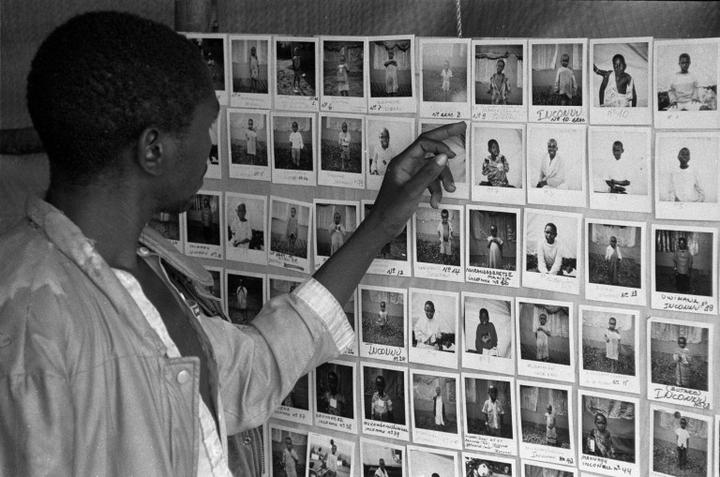 "On Wednesday when we went under lockdown and the emergency alert came through on our phones, suddenly my mind was taken back. The emergency alert sounded like the whistle the killers were blowing when they came hunting for the people.

"It was a heavy night and I couldn't sleep. I started closing the doors and windows. Sometimes you think these things are gone, but little things can trigger that time, that period of the genocide," recalls Judith Mukakayange.

Judith, 46, has lived in Auckland for a little over two decades yet memories of when her country was ravaged by genocide remain fresh in her mind.

April 7 marks 26 years to the day when the Rwanda genocide began, a massacre in which an estimated 800,000 Tutsi were killed by Hutu extremists. Many moderate Hutus lost their lives too, the exact number has not been to established till today.

On the night of April 6 1994 a plane carrying Rwandan President Juvenal Habyarimana, a Hutu, and his Burundian counterpart Cyprien Ntaryamira was was shot down above Kigali. All on board were killed. Hutu extremists blamed the surface-to-air missile attack on Tutsi rebels who denied it and in turn blamed the Hutus.

The incident opened the floodgates to 100 days of slaughter during which an estimated 70% of the Tutsi population was killed.

Ethnic tension and power struggles between the two tribes had simmered over many decades prior to the shooting of the plane. Historically Hutus were the majority, Tutsis formed a smaller portion and made up a ruling monarchy previously while the Twa were an even smaller minority.

Animosity between Tutsi and Hutu was exacerbated by colonial Belgians who arrived in 1916. Their divisive policies fostered discrimination and favouritism, laying the foundations for ethnic divide.

By the 1950s, when anti-colonialism and pan-Africanism spread and the independence process was underway, the ethnic divide between Hutu and Tutsi had already had taken deep hold in Rwanda. By 1961, Hutu and Tutsi were well and truly pitted against each other with each grappling for power in the newly-declared republic.

His assassination opened the doors to a hundred-day massacre across the hilly and densely populated country.

Mobs armed with machetes, clubs, guns and any weapons they could fashion hunted the country for Tutsis to kill while many Hutu who sheltered their Tutsi friends and neighbours also lost their lives. Neighbours turned on neighbours, and friends hunted and hated friends.

The hatred spread far and fast. 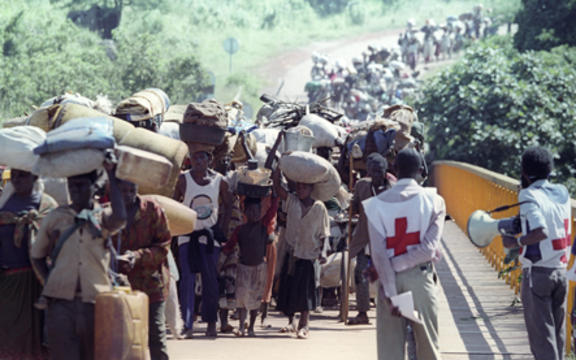 Judith remembers clearly how the terror enveloped her village, how she hid under corpses and slept in bushes to escape roaming killers.

Under the current lockdown, the marking of this day in New Zealand won't be the same for the Rwandan  community; "but that won't stop us. This year on April 7th we will all take a moment to remember those who lost their lives.”

Loss is familiar to Mukakayange. At 23, she’d fallen in love with a Hutu man whom her Tutsi parents accepted. As ethnic tensions flared they were compelled to elope to Kigali to marry. Later in the year in July the genocide ended, the tide turned and the Rwandan Patriotic Front (RPF) a group dominated by Tutsis, took power.

Fearing a possible backlash following this inversion of power, Hutus began to flee in their thousands. Some fled to the Democratic Republic of Congo (DRC) called Zaire then, Burundi, Tanzania and others eastward to Kenya. Some human rights groups say RPF fighters killed hundreds of Hutu civilians while taking power. The RPF denies this.

In 1996 Judith's husband was tracked down in Nairobi and shot. It's unclear as to whom the perpetrators were. In 1998 she arrived in New Zealand as a refugee.

"For me, on 7th April I may light a candle and have some flowers. My daughters, they know about it, but I never go deeper. I never talk about Tutsi and Hutus at all. I just want them to be just Rwandans."

"Rwandans learnt a lot from the mistake of the genocide. Life must go on, we must move on."

Joseph Kimenyi, 64, was employed by the United Nations in 1994, in charge of logistics in Kigali.  He was at work when the President's plane was shot down. After a hellish drive on streets dotted with dead bodies he made his way to the airport and escaped to Nairobi on a UN aircraft.

For Kimenyi, the present sometimes is still as fraught with despair as was the past. 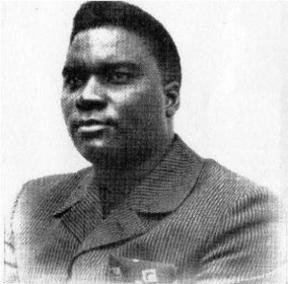 "We have not learnt from our past. Those that don't adhere to the official government narrative are marginalised. We are not hearing the stories from outside the flashy progress of the city, the majority of the country."

Human Rights Watch (HRW) have in its 2020 report raised concerns on Rwanda's diminishing freedom of of expression. It has been reported that some opposition leaders, media and civil society groups that speak out have been silenced through intimidation and arbitrary detention, while some are forced into exile.

According to HRW  "after many years of state intimidation and interference, independent civil society organisations are very weak and few document and expose human rights abuses by state agents."

In light of this current state of affairs, Kimenyi wishes for more transparency and equality in modern day Rwanda in order for people to genuinely move on. He also hopes to return to visit one day.

For Kimenyi, not having the usual yearly gathering in Auckland to mark the anniversary of the genocide is sad, but he knows it will happen in families, regardless. "Me, I will probably call my sisters scattered across the world. We always talk about that day...where we were when the plane was shot down. It was what really sparked the genocide."

Speaking to me about April 7th on the phone one evening from Nelson, Yorkshire-born Robert Askew tells me that memorials for events like the genocide trigger vivid images of his time in refugee camps in the DRC. 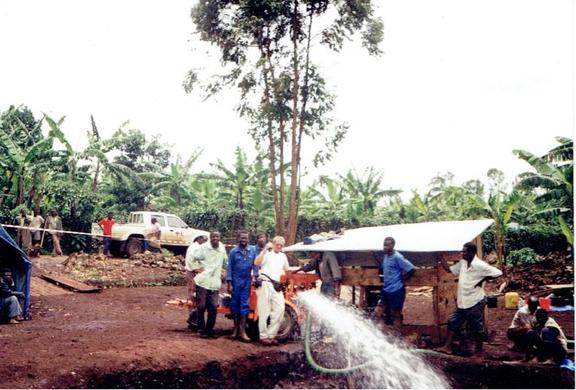 Askew served with the International Red Cross helping with sanitation at two camps in DRC where hundreds of thousands of refugees form Rwanda ended up.

"There was a cholera outbreak. The biggest problem at the time was finding the resources to bury the dead people."

His time there has left him with a lifetime of indelible images of suffering.

"It's like the skin over it, but it doesn't take much just to break that skin open."

Askew is the sort of person who thinks before he speaks, his words softened by the harshness he has borne witness to in the past.

"In the camp of nearly a quarter of a million people, before you even got there you could smell death..it was truly apocalyptic."

He takes a moment to reflect on the anniversary and what it means to him especially in the light of current Covid-19 crisis and health workers today. "Many of our workers back then had to be evacuated because they couldn't deal with the degree of suffering".

"I'm reminded of what such things do to your humanity. In some ways with Covid it's the same thing really - I have real empathy for the health workers at the frontline," he says. 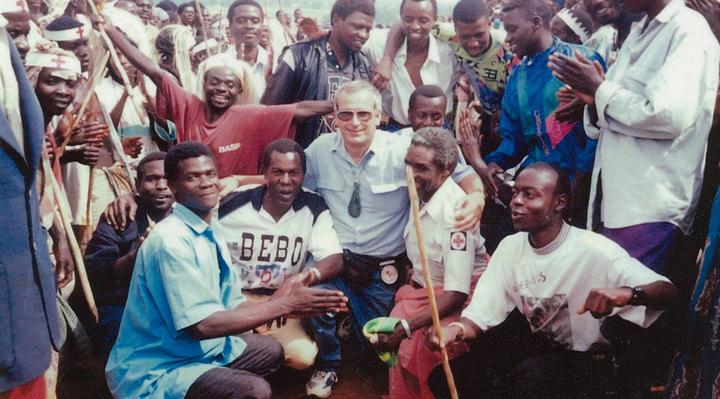 Bob Askew with a young Francois Byanama (in white, on the right) and others at the camp in Goma) 1994 Photo: Bob Askew

Thousands of Rwandans also fled to neighbouring Burundi after the fallout from April 6. Among them was Francois Byanama, who eventually made his way to DRC. It was at the camp in DRC that he met Askew and a few Kiwi nurses from the Red Cross. At the point Byanama was scouting around for work at the camps after a narrow escape from the violence in Kigali in April 1994.

At the camp in DRC he began assisting Askew with language and sanitation tasks. Askew ended up helping Byanama make a case for himself to seek refuge in New Zealand. It was a long shot at the time.

"It's really a miracle that he actually ended up here" 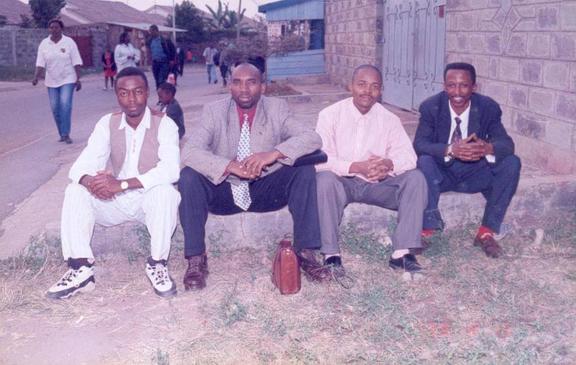 Byanama was one of the earlier refugees to be accepted into Nelson back in 1996.

"It was possible only because Bob was lobbying for me as a human."

"It affected every Rwandan. And sadly the effects live on in every mind.

"I'm mixed - my father is Hutu and my mother was Tutsi. .we were caught in the middle. Many [family members] died on both those sides."

Today, as Byanama reflects on what the anniversary of the genocide means to him he wishes to see that reconciliation for Rwandans takes place in people's hearts and minds, not just on paper.

"Let's do away with hypocrisy and fake love. Let's repent together and live in harmony."

Editor's Note: This article has been corrected to clarify the events of the 1994 Rwandan genocide and RNZ apologises to those hurt by the original story.