Covid-19 - the lockdown and communities

For a woman whose entire life revolves around serving the community, the Covid-19 lockdown is a challenging time compelling her to make hard calls that affect several people in the community - often the ones in most need.

Ranjna Patel is a 3rd generation Kiwi Indian Aucklander and a Queens Service Medal recipient. She’s a true community woman with her finger consistently on the pulse, loved by and inspirational to many in the community.  She’s been responsible for the genesis and running of  three community institutions around in South Auckland. The Swaminarayan temple in Papatoetoe, East Tamaki Health clinics, and Gandhi Nivas, the family harm prevention center. 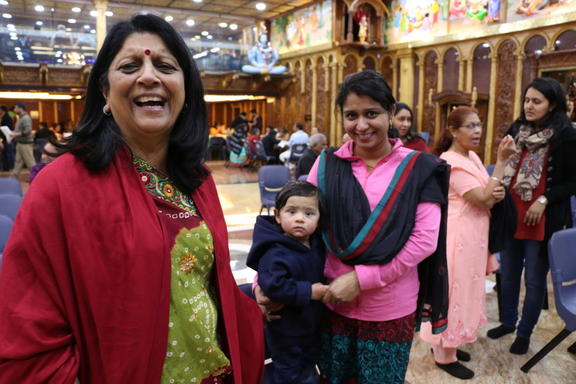 The lockdown imposed by the government affects each of these spaces in a unique way, somehow highlighting their need in society even further.

"These are all people-based, delivering to people in need..so it's a very hard time for us in our heads" says Ranjna.

Gandhi Nivas was founded in 2015 by Ranjana and works with trained counsellors to offer an emergency space and counselling for men who commit family harm or are about to, instead of the women and children leaving home. They are referred to the centre by the police within 24 hours of the incident. By using holistic early intervention methods, counselling and culturally nuanced approaches, Gandhi Nivas has seen huge success rates since they've opened their doors.

The lockdown period could see surge in family harm incidences, with the police preparing to respond to such an increase. At such a time services like Gandhi Nivas seem even more important. It was a huge dilemma Ranjna was in, just a day prior to lockdown. Ranjna had to take the call to shut the doors to keep her staff, the providers of the centre's service, safe and healthy. She's had to resign to the reality of the lockdown.

While this community institution of hers is shut during the lockdown, East Tamaki Health founded by Ranjna and her husband Dr Kantilal Patel, has been working on overdrive. What started in 1977 with one solo GP clinic, Ranjna and her husband today help provide vital medical services to the community in South Auckland. One of the things Ranjana identified early in her career was the need for a diverse cultural workforce that understands the community.

The medical clinic's call centers today have staff across 9 languages including Pacific and Indian languages - a real boon at the time of the current health crisis.

The clinics call centres are seeing heavy traffic, Ranjna’s spiritual pet project, the Swaminarayan temple that opened in 2008, has seen far busier days. What is normally a bustling and vibrant community space, the temple has had to close its doors for the lockdown period.  For temple goers the idea of darshan, which equates to 'viewing', is a key part of devotion, which is the unveiling of the idol and the adulation and worship of it. The lockdown has made this gathering impossible, leaving many immigrants craving cultural interaction they’re so accustomed to.

Luckily, the temple surrounds has several international students from the Indian diaspora both from India and East Africa living there who also happen to be tech savvy and ready to offer their help during the lockdown.

A member of the Kenyan Indian diaspora, Nikhil Rabadia, who moved here in 2014 from Nairobi, has been closely involved with the temple and offered to set up live streaming of the priests' proceedings in the temple each day. In Swaminarayan temples such as this, these are elaborate and colourful proceedings involving the unveiling, the waking up, adornment and laying to bed the idols of the gods, finally ending with closing of their curtains before the end of day.

The current Covid-19 lockdown, as necessary as it is, has pretty much brought most things to a standstill. It’s not only its social and cultural effect on the community that Ranjna’s worried about - but its mental impact as well. With senior members of the community relying on the temple for the interaction and the independence they get from their daily visits, their mental well-being is big concern for Ranjna during this lockdown period.

"It's a hard thing to do, you don’t shut the doors on a place where you go to find peace in your life" says Ranjna.