A bus ride to bust stereotypes around different faiths 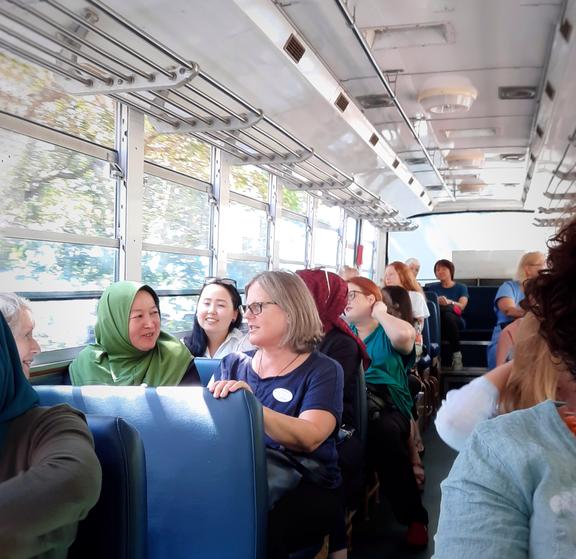 A year ago it was at an ‘iftar’, the Muslim evening communal meal, that Petra Zaleski a Vicar, met Naomi Johnson of the Progressive Jewish denomination. The church service and iftar was organized by Petra’s church as a gesture of solidarity with Auckland’s Muslim community in the wake of the attacks on March 15 2019 in Christchurch.

Exactly a year later Petra, Naomi and Jenny Janif from the Muslim community decided to come together again, but this time it was on a bus.

The interfaith event, Multiple Blessings, took place on a sunny Sunday in Auckland and was organized by these women of the three Abrahamic faiths to mark International Women’s Day and the anniversary of the Christchurch shooting.

“I was floored by the response in our church last year…just to see Muslim whanau and our church members come together to mourn the tragedy that had occurred in Christchurch. When Naomi called me few months ago about the interfaith event I was very quick to say yes, it was an opportunity I couldn’t resist” Petra says.

Before the bus sets off Naomi encourages the women to sit next to someone they don’t know. “Otherwise the point of today is defeated” she says. 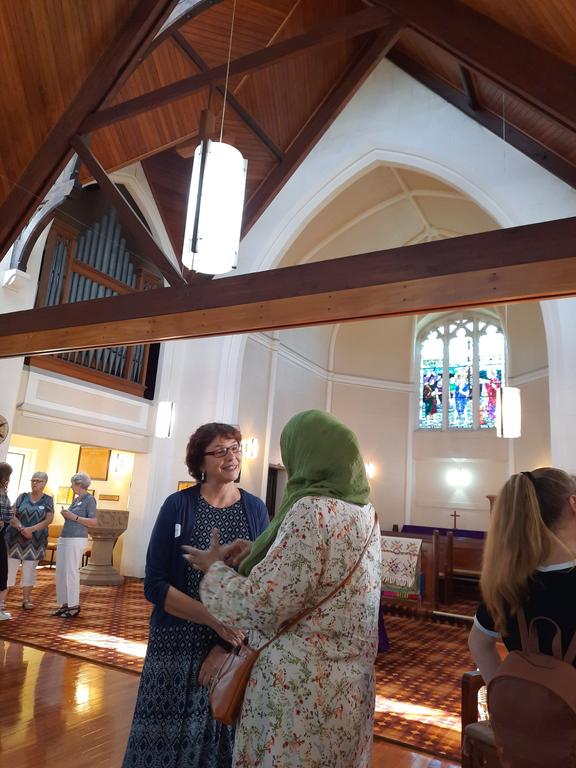 The peals of laughter and chatter that shortly follows, revolves a lot around scarves, food, politics and cultural customs. It’s a pleasant cacophony that rings through the bus. But for this group of women the bus trip isn’t just a joy ride. It’s about coming together as change-makers and advocates for peace and understanding – an understanding that is arrived at through breaking stereotypes and increasing awareness.

A Japanese lady sits next to a new convert to Judaism. I see the Tongan Christian lady sitting next to the South African Muslim of Malay origin. The Uighur former refugee sits next to a Christian lady from Auckland; the latter says she’s more Buddhist in her practice than anything else. Meanwhile I find a seat next to Petra.

Petra seems an unlikely Vicar with her large retro glasses, winged eyeliner and tattoos across her forearms and chest. As a teen she was raised Catholic by Polish and English parents. Looking at things critically seems to come naturally to her, thanks to her mother’s journalistic background.

That also however meant she felt out of place in the conservative and gender-biased religious system she was part of.  Struggling with her identity, Petra had a long tryst with addiction, rehab eventually becoming a familiar place. It was then that she became deeply interested in theology but through her feminist lens and began to delve deeper into exploring gender neutral ideas of divinity.

Petra eventually joined the Anglican church, which according to her espouses the idea of “radical inclusion” - a space for all; and one where even she could become a Vicar. 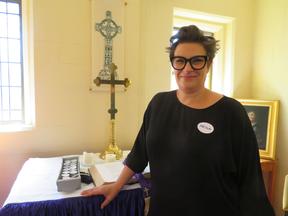 It is from this space that Petra finds herself deeply interested in how women experience faith, whether it is at the forefront of religious leadership, or through marginal or grassroot movements that push for social change through cultural understanding.

Naomi Johnson is a big believer in the impact women can have on communal harmony. Naomi’s Jewish parents came to New Zealand as refugees after the Holocaust and she grew up hearing their stories. The desire to rise above communal hatred has underpinned her efforts in organizing this interfaith event a couple of times each year.

She believes there’s a strong need for women to take up this sort of leadership and push through prevalent patriarchal structures. She cites the Christchurch mosque attacks and the Muslim Women’s Council, who had warned about the possibility of attacks but were ignored.

Naomi takes to the podium in the synagogue and explains the ins and outs of what a service in Hebrew looks like, along with breaking down some of the tenets. When it comes to religion, she says, we tend focus more on the differences when there are more similarities.

Over at the mosque Jenny and Imam Firoze are ready to receive the group of ladies, many of whom have never set foot in each other’s places of worship.

Jenny Janif was awarded the Queens Order of Merit this year for her services to Refugee and Migrant communities. She sees today as an opportunity to welcome these ladies and show them around the mosque in Ponsonby, while learning about some basic Islamic beliefs and protocol.

The Imam talks through mosque protocol – the ablutions, direction of prayer, the difference between men and women’s prayer spaces. 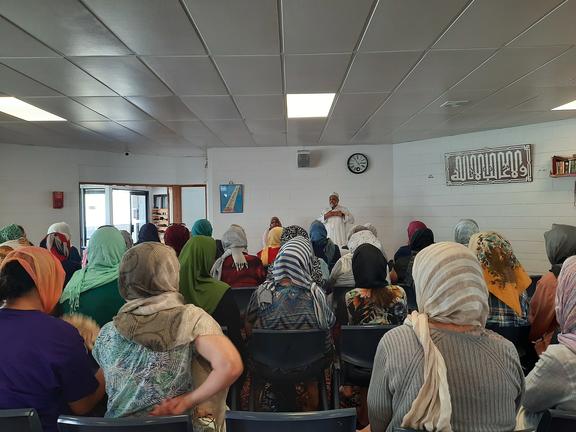 “What you don’t know you don’t know…. so today is about demystifying stereotypes. We all have so much in common so why not focus on that rather than the differences” says Jennifer sitting in the meeting hall of the Ponsonby mosque in her full robe and headscarf.

Jenny smiles, rather pleased at today’s turn out and the interest she sees around. She helps lay out the snacks on the table - samosas and dates, while the group intently listens to the Imam as he shows them around.

“It’s about showing solidarity” says Jenny, “and strengthening our sisterhood.”

“I know it may be an overused term, but it’s all been so real”, says Petra. About her daughter struggling to keep the headscarf on while in the mosque, Petra says “she asked a Muslim lady about how she keeps the scarf from falling off. The lady just giggled and said “actually I only wear it to the mosque!”

“So yes there’s the image, the transcendence, the symbolism and all of it, but at the end of the day we’re all just real people doing real things”.

So what happens when a Jew, Christian and Muslim come together? Generous servings of hot cross buns, samosas and Hanukkah radish salad are all on the menu, as is a healthy serving of interfaith goodwill.