Naima Ali was at Polyfest in Auckland when she first heard a lone gunman had attacked two mosques in Christchurch, on March 15 last year. She went to her car and locked the doors. But within 24 hours she had joined a group of volunteers on their way south to help families of the victims. What she saw and heard over the next fortnight has further spurred her work with high school students. 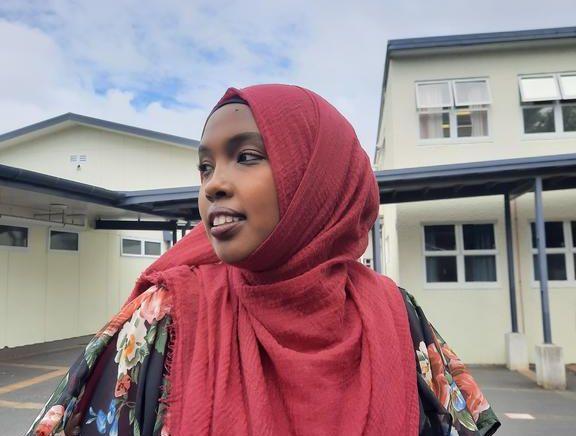 28 year-old Naima Ali struggles to talk about her experiences in Christchurch. But what she went through has had a profound impact on her job as a refugee student coordinator at Mt Roskill Grammar, she works with children from refugee and ethnic minority backgrounds supporting, counselling and mentoring several of them.

On the night of March 15 last year, she was part of a gathering of community members, leaders and non-governmental representatives who decided to go to Christchurch to help support the victims' families. Supported by the Ministry of Social Development, the group was deployed the very next day and ended up working across homes, hospitals and community meeting places providing cultural and emotional support to families.

"What I saw happening was [that the] community would come to them.They spoke the languages and you know in times of trauma English can desert you. They would talk to them, understand the issue, help them connect with other agencies, act as interpreters where they needed to... they were very much is demand."

In Christchurch in the days that followed the mosque attacks Naima worked closely with 59 year-old Ahmed Tani, another former refugee from Somalia. Ahmed runs the Canterbury Refugee Resettlement Resource Centre and is Chair of the New Zealand National Refugee Association. He's seen first-hand the violence of civil war in his home country and has since 1999 been involved in helping settle and support refugees in Canterbury.

Naima came from Somalia to New Zealand as an eight year-old and while their individual experiences as refugees are different, their paths intersected as volunteers in Christchurch. And he was impressed with what he saw.

"I have seen bloody roads, dead bodies, houses burned..I have seen all that. Thirty years ago, Naima was not yet born" he says. "When Naima and the team came, they did very very hard work... and they actually served the people of Christchurch. I really appreciate them."

On Naima's part, she has come to see Ahmed as "a father figure". "He's a Somali elder we all respect".

A year on, both their lives have been deeply affected. For Naima, her love of poetry and spoken word has grown as she has looked for a tool to express and empower people within the Muslim community, especially the teenagers at her school. She mentors young Muslim girls in her school to express themselves and their anguish around the attacks, through spoken word.

While Ahmed continues to work with the same dedication to help former refugees living in the Canterbury region, life is not the same with him and others in the community becoming more security-conscious.

"I believe things are changing..."

How? Cameras at mosques were unheard of before, he says. Now they are an everyday reality.

"What we do is learn from our past and share what we can to others.. and learn from each other" says Naima.