Kiwi twist on soup for the soul

Kiwis often show their love through cooking food. Bangalore born Rama and Gautam Narayan have such a passion for doing that it has now become a family business. 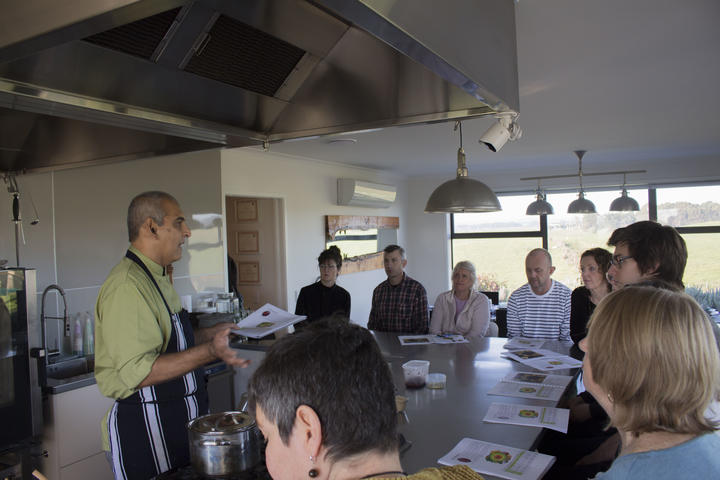 Gautam breaks down the dishes he is about to cook for the class. Photo: Sean Stapleton

The couple help clients with ways to take better care of themselves and their families by what they cook up from scratch in the kitchen.

They also specialise in cooking new cuisines as well as good food for those suffering from chronic illnesses and post-operative clients as part of their business.

“When we were in the process of looking after Gautam’s niece and looking for options of what alternative support we could give her, we found it very hard to find any professionals who would show us how to do it,” says Rama.

When their niece was diagnosed back in 2008 with a grade three brain tumour, astrocytoma, Gautam travelled to America to help look after her as she went through radiation and chemo as her personal carer and chef.

It was that personal experience that planted the seed for their business.

“There were a lot of theories there, a lot of information, all very accurate but very overwhelming," she says. "We wanted to have a more hands on approach and actually show people it can be done.”

The experience inspired Gautam to take a course with Bauman’s College of Holistic nutrition and Culinary arts in California, to up-skill himself so he could help others the way he did his niece.

Fast forward to now, the couple's niece is doing well and still resides in the USA as a zoo curator.

Rama likes to joke that she’s been supervising her husband since day one when they met working together at the West End hotel in India.

“I actually met her because we were making an Eiffel tower for Christmas out of a royal icing,” says Gautam.

Back then, Rama was the housekeeper and Gautam a fresh-faced sous chef.

“We had taken one of the rooms that was in her block and she’d come and check to make sure that we were not messing up the carpet. She came for the three weeks that we were working on that Eiffel tower," he says.

There are also custom food packages, table staging and one on one workshops held at their home.

While Auckland is their permanent base now they had spent many years abroad, particularly in the Middle East. 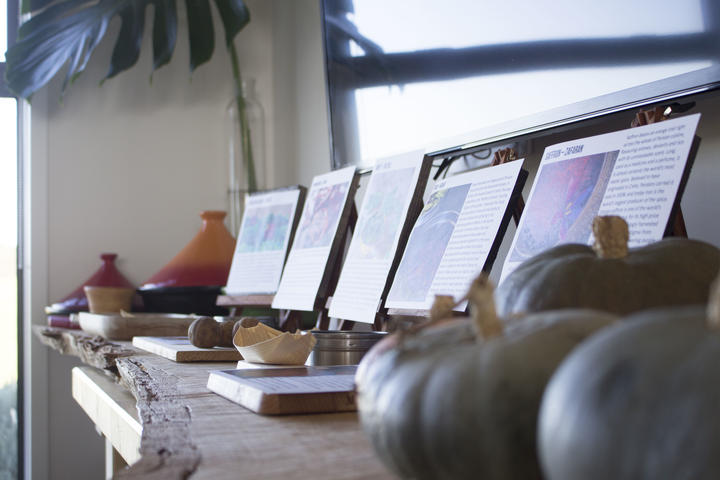 A display on Persian cuisine and cooking practices set out by Rama. Photo: Sean Stapleton

They moved to Yemen in 1995 so Gautam could pursue his career as a chef further and take the step up from sous chef in Bangalore where he had been for a decade.

“There was not much growth in the hotel I was in then because I specialize in Thai cuisine," he says. "Thai chefs are hard to come by, so I wasn't being relieved from the hotel for a senior position.”

The hotel had several international locations and Gautam got the opportunity to transfer abroad.

“I got to Yemen," he says. "[I] worked with the United Nations World Bank, a lot of the European embassies, the American embassy, and got to learn different cuisines as well.” 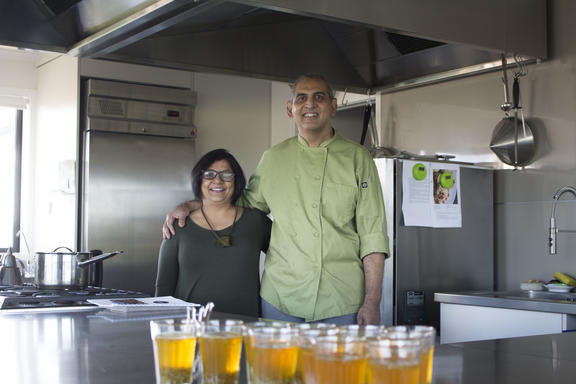 So moving to New Zealand in 2001 was a chance for their daughter to be educated here and for them to thrive and for Rama to regain her independence. Now they have the best of both worlds as New Zealand citizens.

The pair also give back to their community, as Gautam often volunteers his time and expertise at two local schools -  Ottawa and Awhitu. More schools have shown an interested now.

“We grow vegetables and then every Thursday we take it to the kitchen when we actually cook up a healthy meal where kids are exposed to new food, quinoa or sushi, something that they never sort of eaten before," he says.

“When one mother at the school told me her kid now eats vegetables, I actually had tears in my eyes."

Gautam says their aim is to get Kiwis to stay motivated to eat healthy and cook new cuisines at home no matter what age.