The Eye of the Liger

A Pacific island wrestler with a half lion-half tiger alter ego has carved a career out of his childhood love of comics and wrestling.

"Liger is my pro wrestling character persona. Half lion and half tiger but full Samoan," said Michel Mulipola.

"When I put on my character mask and step through those curtains, it is like this switch gets flicked," he said. 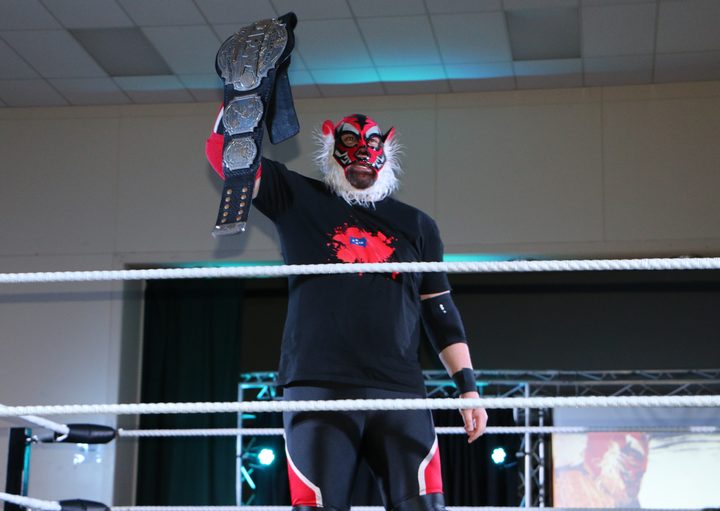 Liger was the first comic book character Michel created as a boy.

In the ring, this friendly laid back islander becomes lippy, does violent flips and jumps on to tables, much like any superhero would.

He also uses props in the ring that are easily spotted in South Auckland, like a cabin bread tin table, jandals and a stop sign.

"I have got so many injuries, even as a pro-wrestler," he said. "My shoulder, my knee and look my neck clicks but lucky it’s nothing serious.”

He got interested in wrestling as a 7-year old growing up in Mangere.

“Wrestlers on TV seemed to be comic book characters in real life” he said.

Already he has won recognition for his comic book work, like the 2006 Gibson Award for Best NZ Comic Book Artist.

He is also a role model for the not-for-profit Duffy Books programme which gives away books to students attending lower decile schools nationwide. 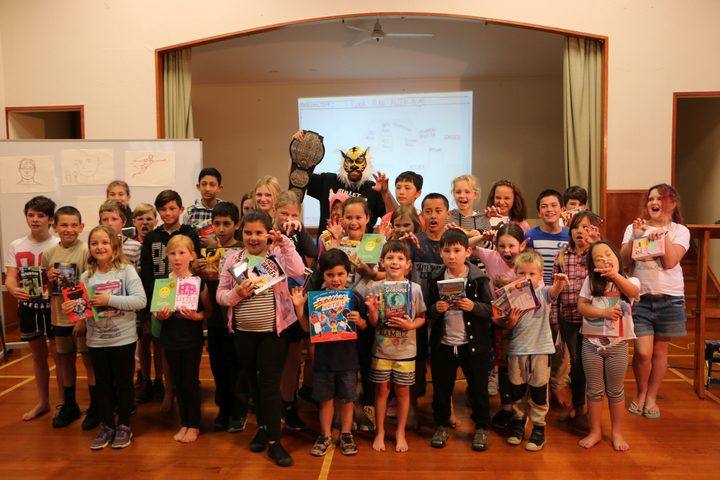 This month, Michel told his life story to 35 kids at Orere Primary where he talked about his passion for comic books, drawing, wrestling and migrant family roots.

Michel’s name traces back to the villages of Vaimoso and Lefaga and the Mulipola name hails from Manono.

His grandparents migrated from Samoa in 1967 for a better life in New Zealand.

He gets emotional when he sees his family name on a comic book cover.

“I wouldn’t be where I am without their sacrifice,” he said.

His ancestry can also be traced back to Samoa’s Mau movement which led to the country’s independence. 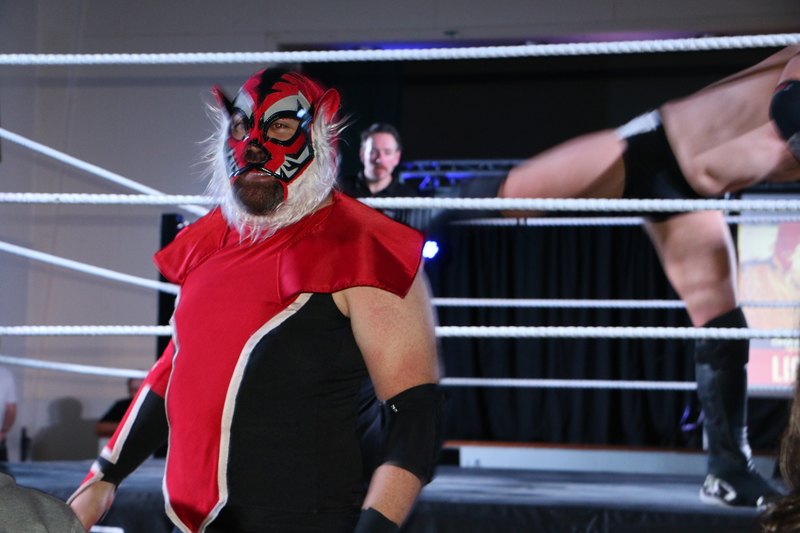 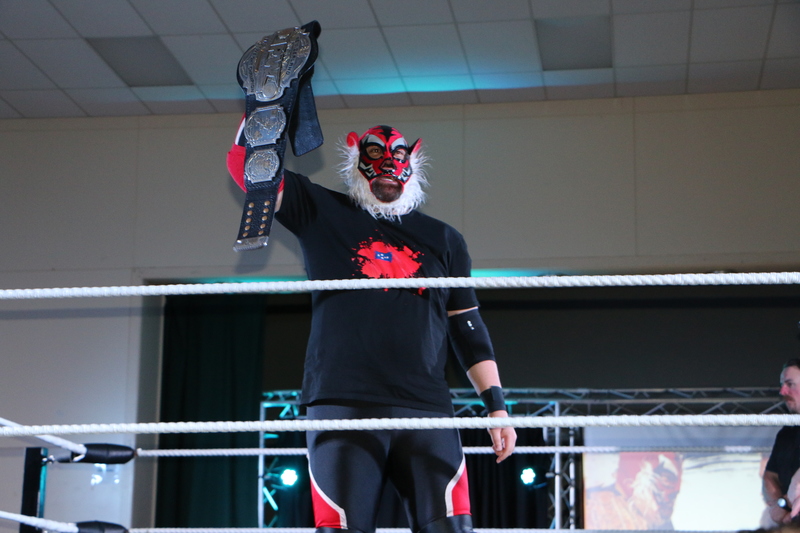 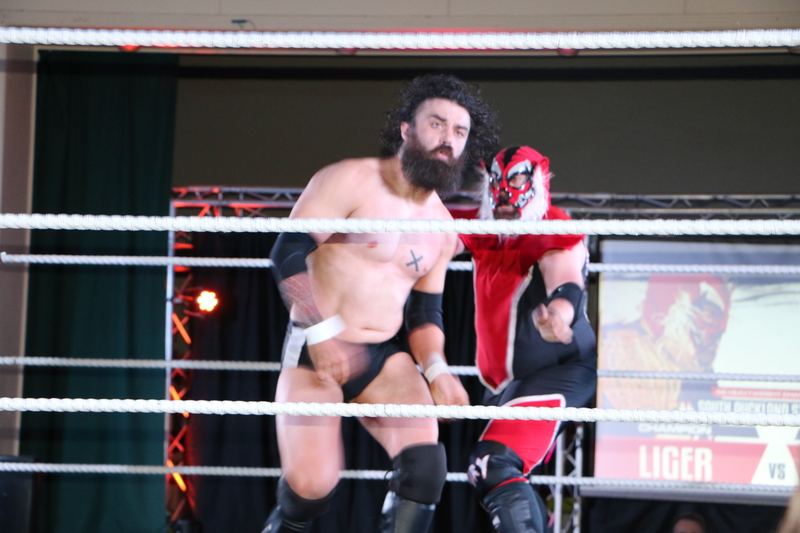 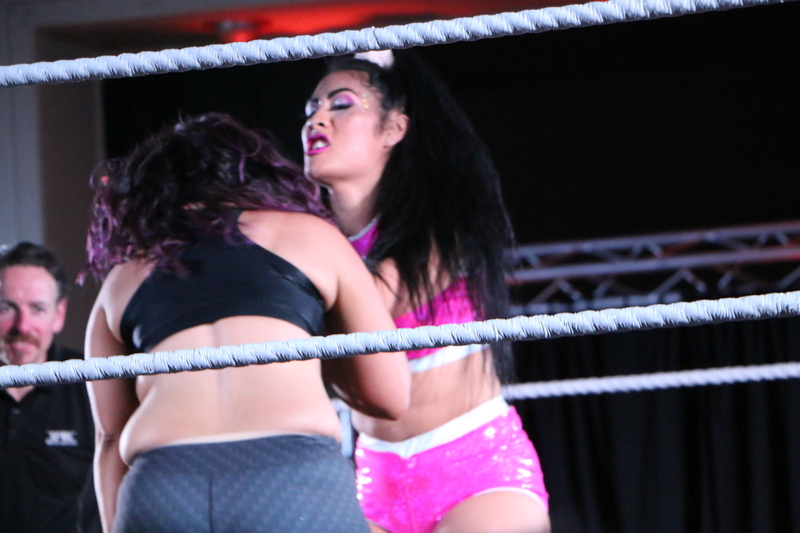 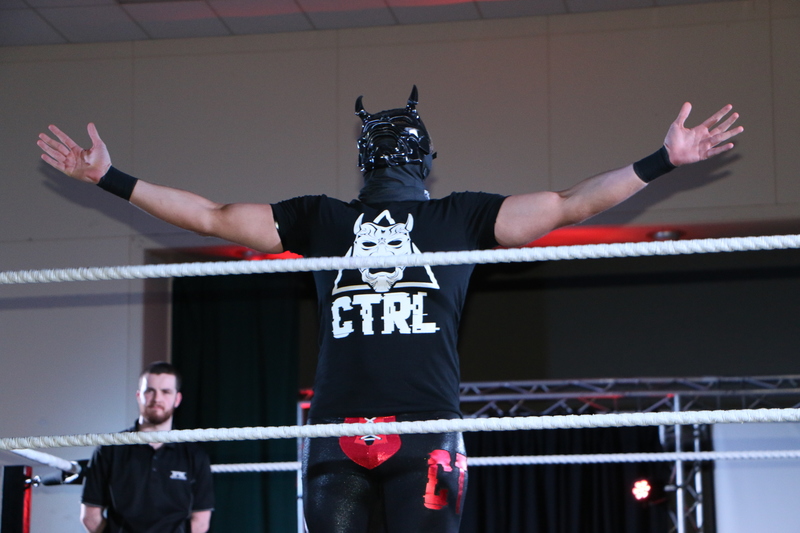 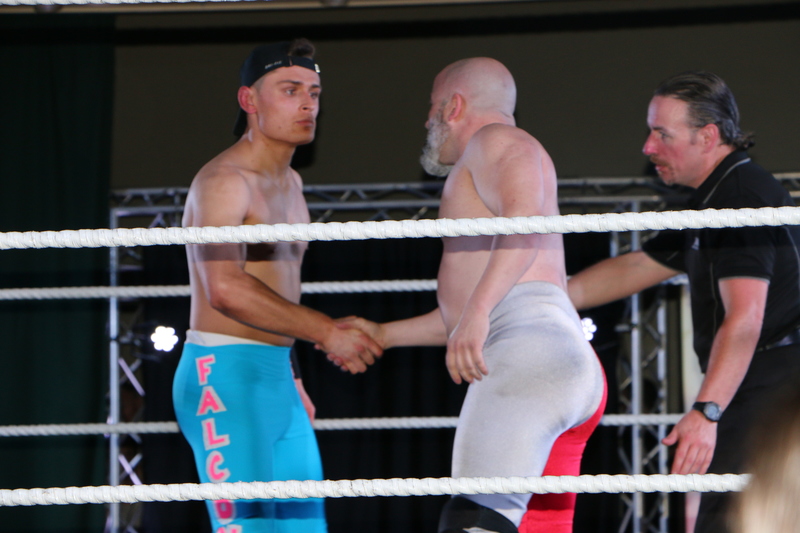 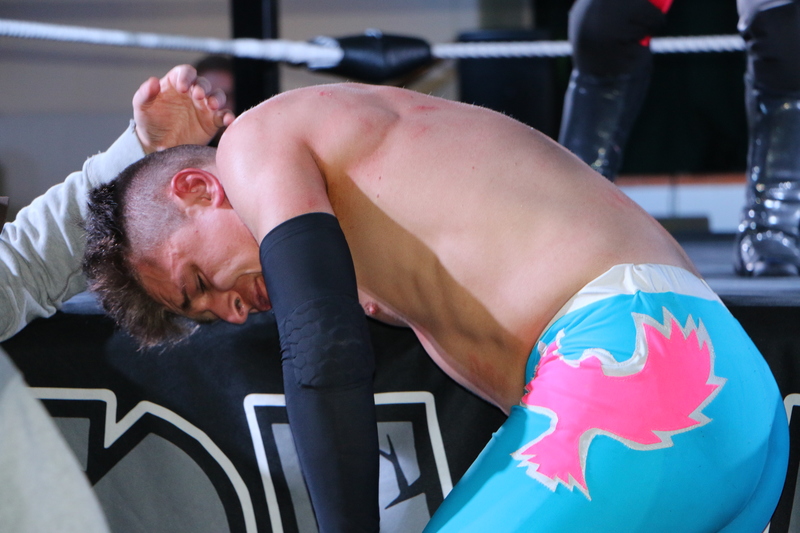 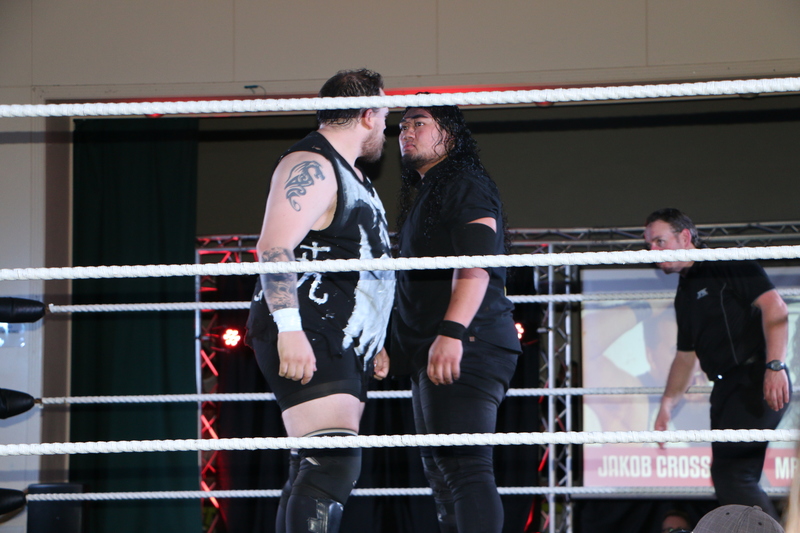 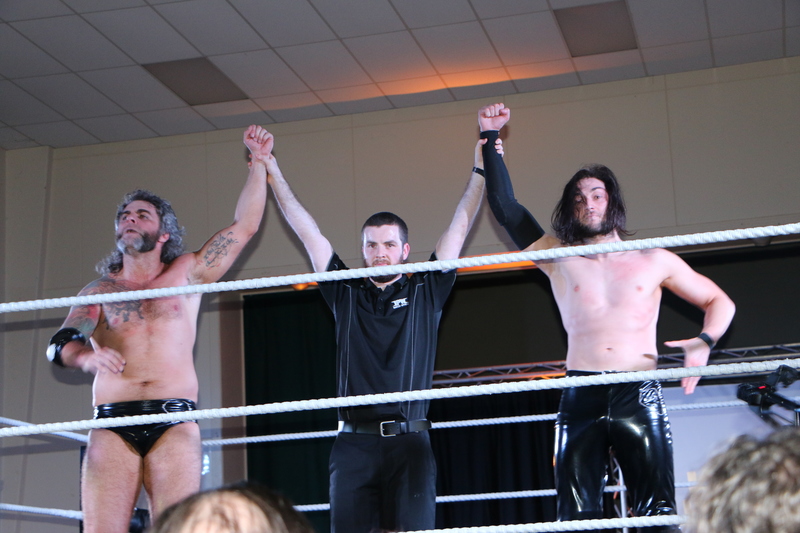 Other wrestlers fight on the night

“My grandmother was descended from the Solomona family, whose father was Matautia Solomona who worked at the post office but he was also the secretary of the Mau Movement.”

“Apparently Matautia was like this double agent at the time,” he said.

Michel said Matautia could see all the communication coming in for the New Zealand government and he relayed that information to the Mau and as a result was put on the NZ administration’s wanted list.”

This history could partly explain his fascination with comic book heroes and it is this long love of reading comics as a child that led him to want to be a Duffy Books role model.

There are now more Pacific students thriving at school given NCEA results and new research showed that they make as much progress against curriculum expectations as other students in areas like reading writing and maths.

"In particular we know that children whose first language isn't English don't always achieve at the same level in their early years of schooling as their peers," said Dr Jones.

"And we know from our National Monitoring Study that many Pacific students start behind their peers in subjects such as English."

Back at Orere Primary School, Michel tells Duffy students to do what they love.

"I have to pinch myself sometimes," he said. "My life is based on comics, wrestling and even video games."

"All the stuff I loved as a kid, I have turned it all into a career." 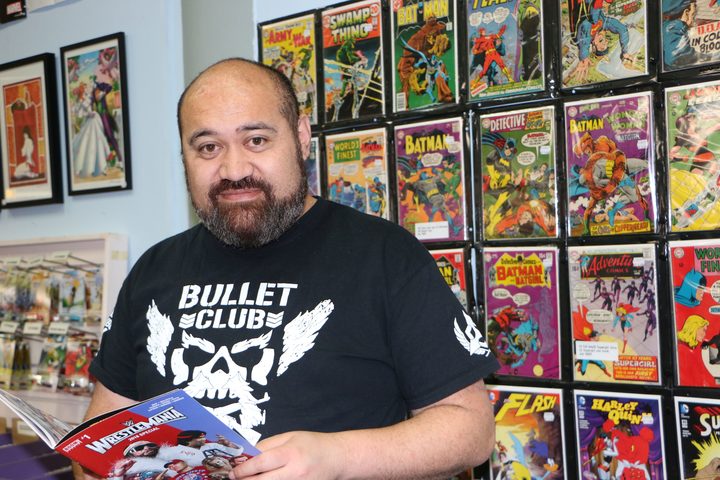 "My family thought I would grow out of it, but here I am, still drawing comics."

His first big break came when he entered an energy drink competition in 2010 and won $10,000 dollars for his idea.

Instead of wasting it, he spent the winnings on art supplies, a new computer and booked his ticket to the San Diego Comic Convention.

There he met key industry people who saw his potential and it was a turning point for him.

Since then the work has been growing and he is often busy illustrating comics for World Wrestling Entertainment (WWE).

The next WWE book is coming out in January and currently he is working on the American graphic novel, Headlocked: The Last Territory.

Fanene's grandson is the former wrestler turned Hollywood celebrity, Dwayne THE ROCK Johnson, and one day Michel hopes to meet him.

He’s already met another wrestling idol,  Tonga 'Uli'uli Fifita aka King Haku , who was plucked from Tonga to become a famous WWE wrestler in the 1980s and 1990s.

"On TV back then there weren’t many brown people on the screen and so Haku used to jump on  and he'd speak full on Tongan and I always thought 'wow this guy is unashamedly Tongan, I loved it."

Michel was the impact pro-wrestling heavy weight champion in New Zealand, until he lost the title this month to Liam Fury.

"It was the first time I had won the title in the 12 years I have been on the pro-wrestler circuit", he said with a grin.

But he isn't giving up quite yet and is keen to try and get it back again. In the interim, he is enjoying every moment of his life living his childhood dream.