For Nurul Shamsul, her biggest concern right now is trying to stay hydrated while she observes Ramadan at a retreat in Thailand. It wouldn’t do to faint during a photo shoot. “But I’m sure I can do it,” she says.

Determination seems to be a big part of her personality; that and her belief in Islam.

The Malaysian-born Waikato University student is one of 20 finalists for Miss Universe New Zealand 2018, and the 20 year-old self-described “farm girl” from Morrinsville is making history as the first contestant to wear hijab in the annual competition here. 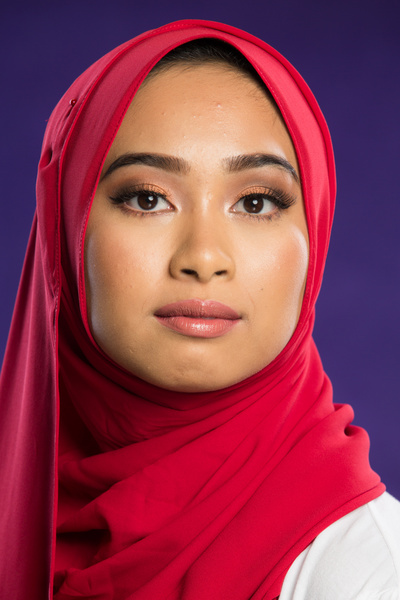 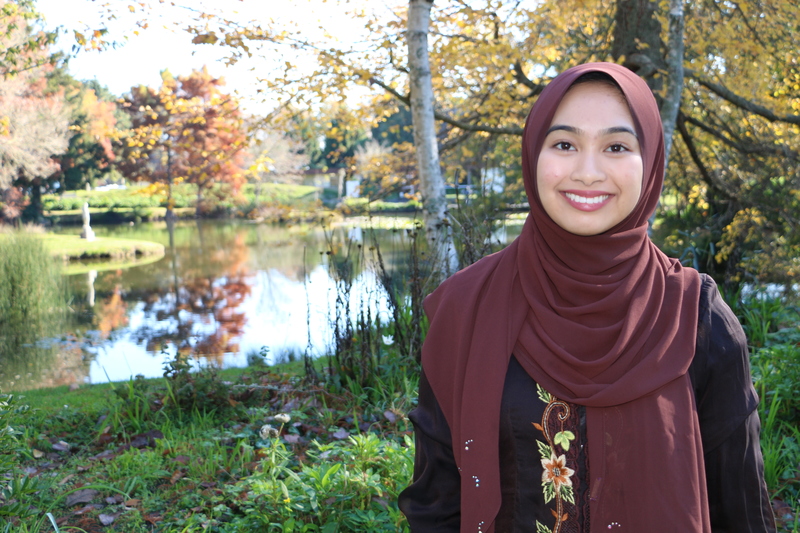 Observing Ramadan, at Waikato University before the trip to the retreat in Thailand. Photo RNZ Lynda Chanwai-Earle 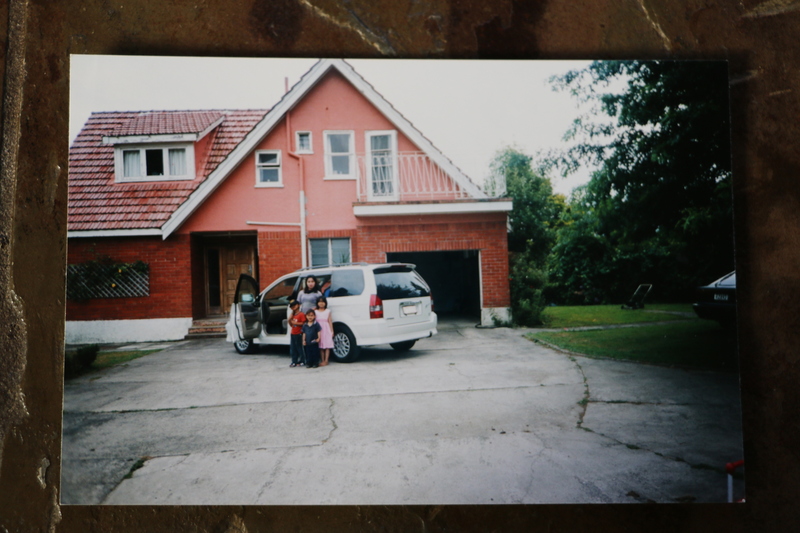 Nurul age 5 with family at their two story pink farmhouse in Morrinsville. 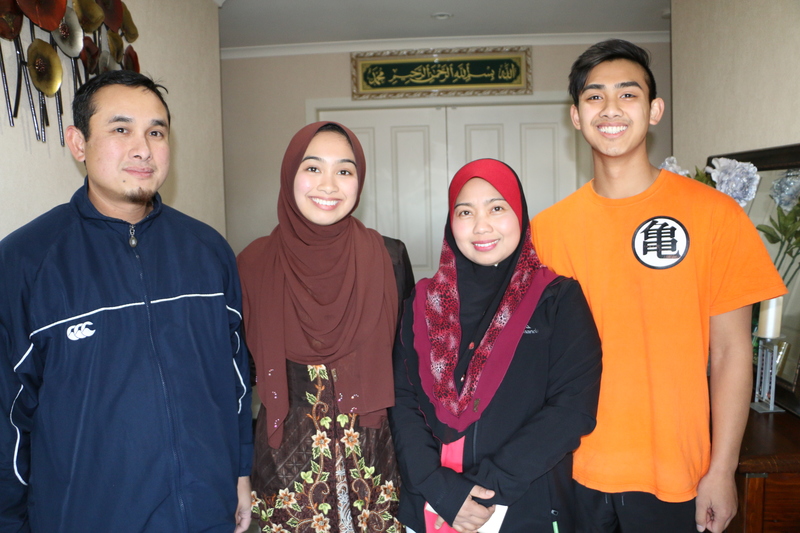 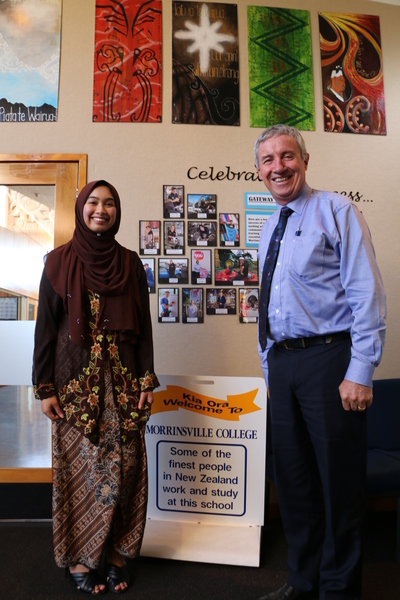 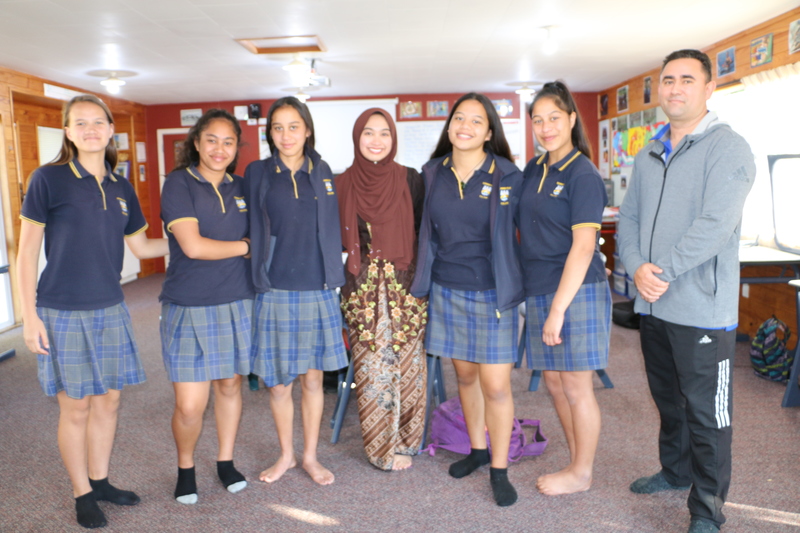 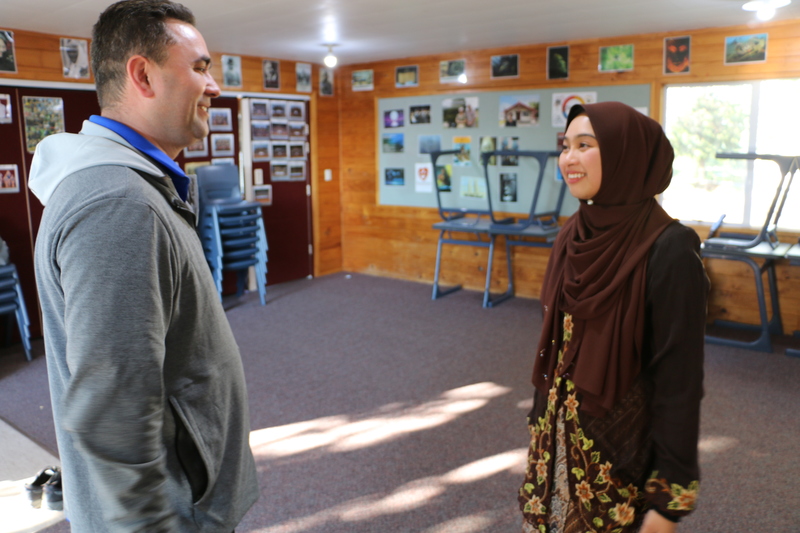 Matua Potaka is a big fan of Nurul's leadership skills. 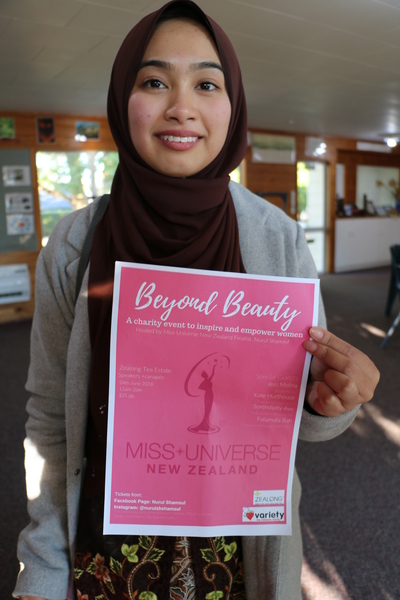 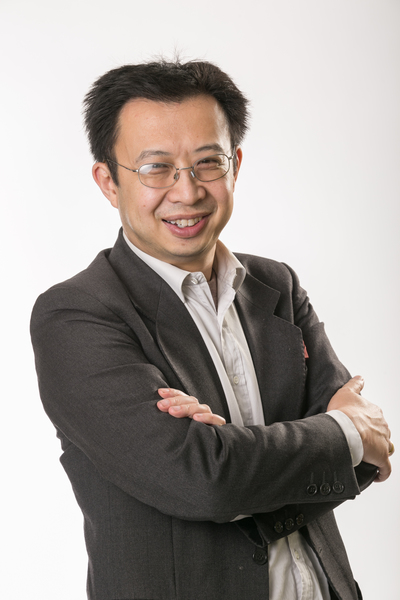 Nurul’s not the first Muslim woman in the world to don the hijab in a Miss Universe-affiliated pageant; 19-year-old Somali-American Halima Aden entered Miss Minnesota USA in 2016 wearing hijab and burkini.

However Nurul’s still a torchbearer and her story is going viral across Malaysia, where she’s become something of an icon. Berita Harian, the Malay Mail, Radio Ezra and Emirates Woman are now clamouring for interviews. She wants to give young Muslim women a visibility they can be proud of.

“A lot of Muslim girls are scared of wearing the hijab because of possible harassment. I hope that by wearing the hijab in this competition I’ll show some confidence. It’s okay to wear the hijab, you’ll still look beautiful in the hijab.”

Walking the lush grounds at the University of Waikato before boarding the plane to Thailand, Nurul tells me she’s in her final year of a Bachelor of Social Science in Psychology and Social Policy. She’s also the first in her family to attend university, a contrast to when she first arrived in Morrinsville aged five.

“Yeah I remember arriving in New Zealand, and it was really different because I didn’t know how to speak English at all. When I enrolled at the country school I was the only Asian.”

So who exactly is ‘the girl in a wine red scarf’, making this controversial stance on the Miss Universe NZ stage? If you want to know just check out her blog of the same name.

Nurul grew up in a two-story, pink farmhouse and worked at the local Halal meatworks to earn pocket money during school holidays. She’s regarded as a leader at her former high school, Morrinsville College, already famous for another former student; Prime Minister Jacinda Ardern.

Nurul chose to wear hijab in public only three years ago and says her family never pressured her. “Islam has really grown within me and in my heart.”

But why enter a beauty pageant, of all things?  “I watched the video of the grand finals and I thought to myself what would happen if I entered Miss Universe New Zealand?”

What happened was a period of deep self-reflection.

She describes herself as an Islamic feminist in her blog – so are the beauty pageants at odds with her faith and the Koran’s edicts to cover the body and be modest?

“I hope to break those stereotypes, I hope to put a positive light on Islam as well.”

With a population of 660 students in a largely rural community, Principal John Inger couldn’t quite believe it when he heard about Nurul’s decision to compete.

“I have to say I was very surprised. Not that she’s not beautiful, because she has the most beautiful nature, but I guess my concept of Miss Universe is different from what it’s all about.”

For Jack Yan and Nigel Godfrey, the co-directors of Miss Universe New Zealand since 2012, it’s been about overhauling the pageant culture.

“She is the first hijabi in the competition,” Jack says, “But that’s part of the diversity that we’ve got of Miss Universe New Zealand.”

“We did ask her – ‘What does it mean to be hijabi?’ We wanted to know if once the media started asking these questions that she would have a decent answer that was authentic and true to herself. And to her credit she did.”

Nurul also wants to turn the culture of beauty inside out. “[I hope] to change the meaning of beauty, so it’s not external. Physical beauty always fades, but internal beauty is important. Women and girls they need to know their self-worth.”

However the biggest barrier to Nurul entering the competition was just two tiny scraps of cloth; the bikini.

The #TimesUp and #MeToo movements have swept across the globe in the past year, but Miss Universe New Zealand was already leading the way in 2012. Jack Yan says that when he and Nigel took over the New Zealand pageant that year, it was failing. So they got rid of the bikini line-up.

The changes were described by Paula Sugart, President of Miss Universe, as “The biggest turnaround of any territory in the Miss Universe group in the last 20 years.”

Following their lead, Miss America has just this month dropped the swimsuit competition too, saying it will no longer judge contestants on their appearance. 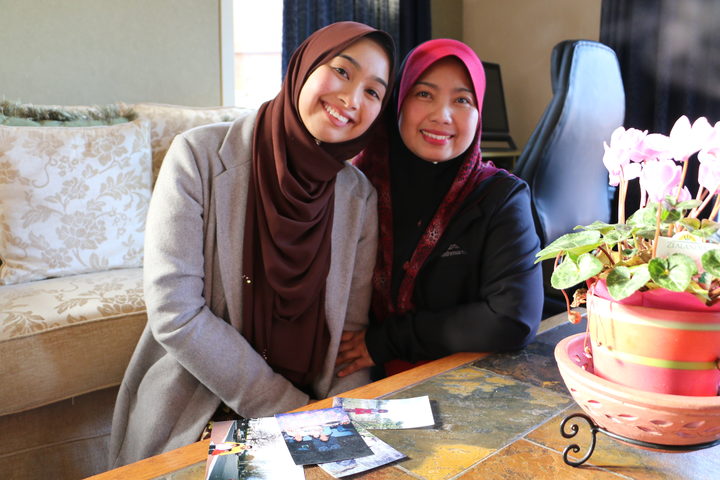 Even so, Nurul’s parents and two younger brothers were gob-smacked when they learned of her choice to enter the pageant.

At their spacious Morrinsville home, mum Anie says the first thing they asked was whether Nurul had to expose herself.  “I little bit nervous, it’s not the Muslim way.”

Anie laughs, recalling relief at Nurul’s answer, “No, I don’t.”

John Inger is relieved too, “From a Principal’s point of view and knowing Nurul very well, I’m also very pleased she won’t have to dress in that bikini.”

But one challenge Nurul has to take on is fundraising for the pageant’s designated charity, Variety. So she’s holding a ‘Beyond Beauty’ event raising awareness around feminist issues like body image. Invited speakers include young, Muslim and black Islamic feminist Fatumata Bah.

The finals of the Miss Universe New Zealand 2018 will be held on 4 August, screening on Bravo.