Two flags fly proud over the inaugural steelband festival in Auckland’s Silo Park, flapping in a brisk late summer breeze. Both are red, black and white; both tell a tale of colonisation. But they come from different corners of the earth – one is the Tino rangatiratanga’s flag of Māori sovereignty and the flag of the Republic of Trinidad and Tobago.

The flags visually unite Māori and New Zealand’s Caribbean community, but at this festival the ties between the two are more heard than seen, as they celebrate their deep cultural ties through music that has deeper roots in historical protest. 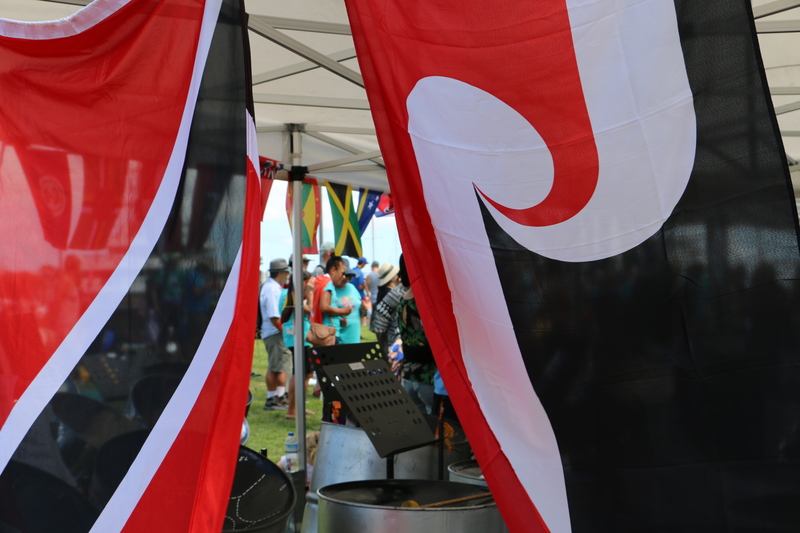 Flying with pride, the flag of Trinadad and Tabago and Tino rangatiratanga's flag of Maori sovereignty 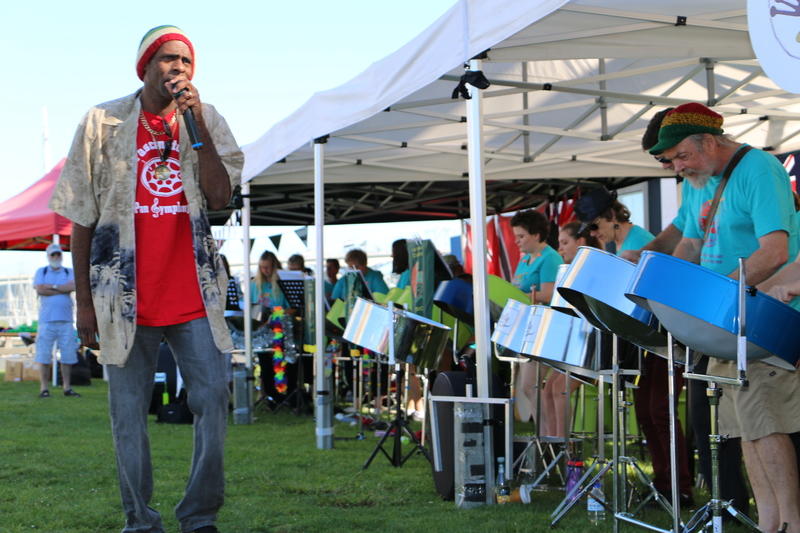 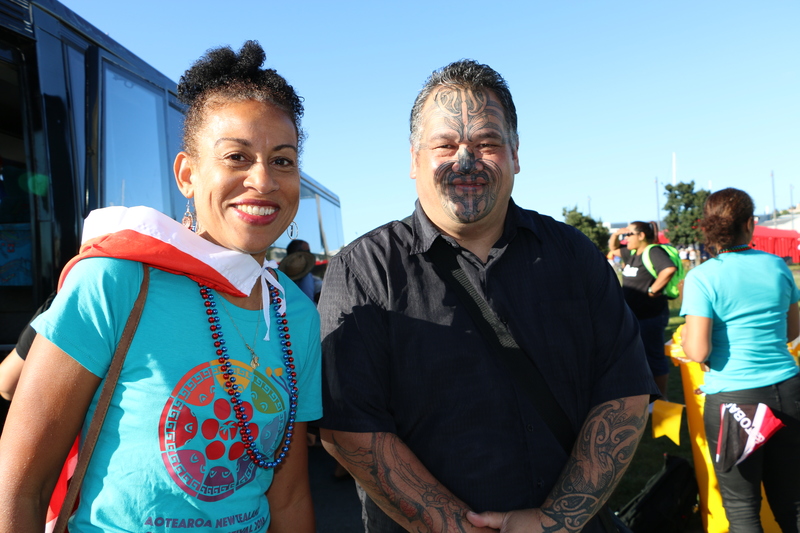 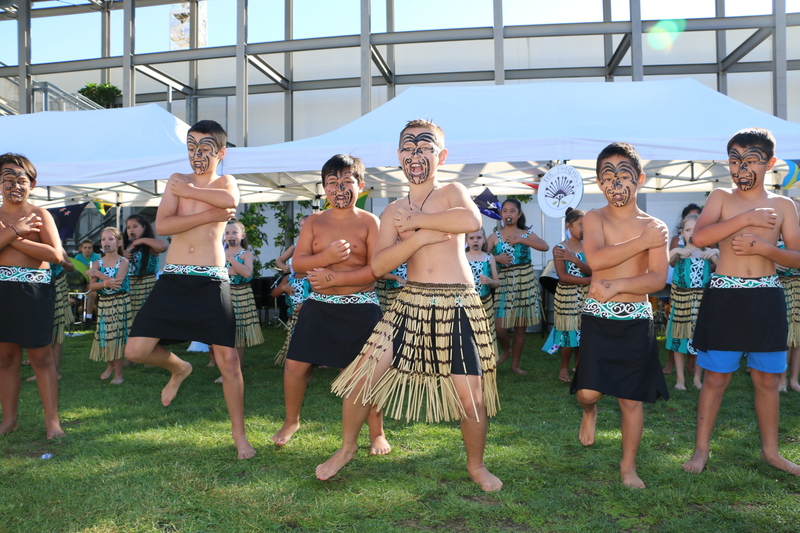 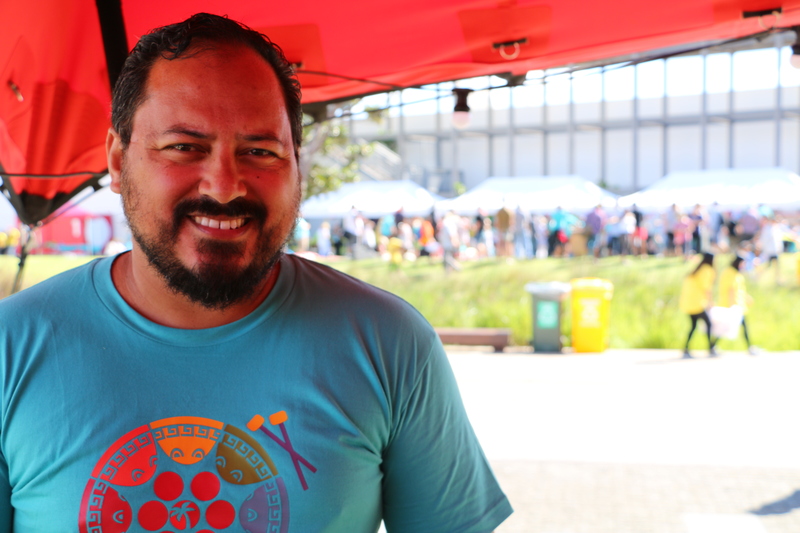 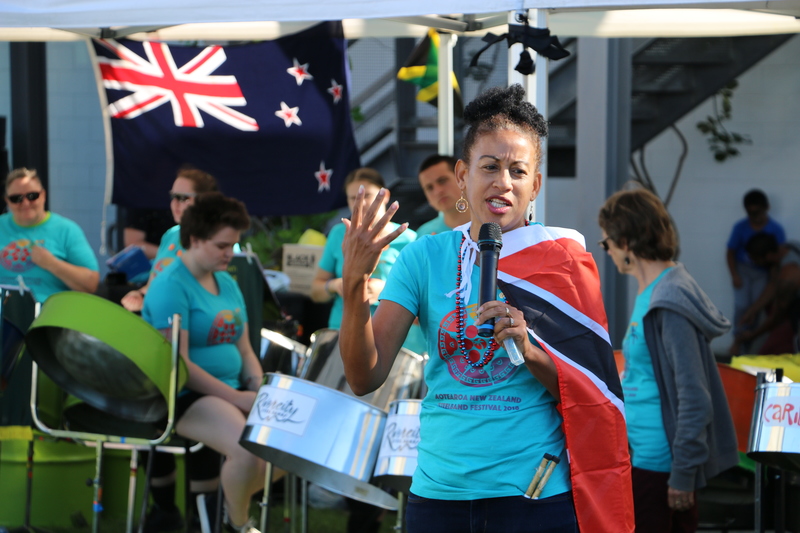 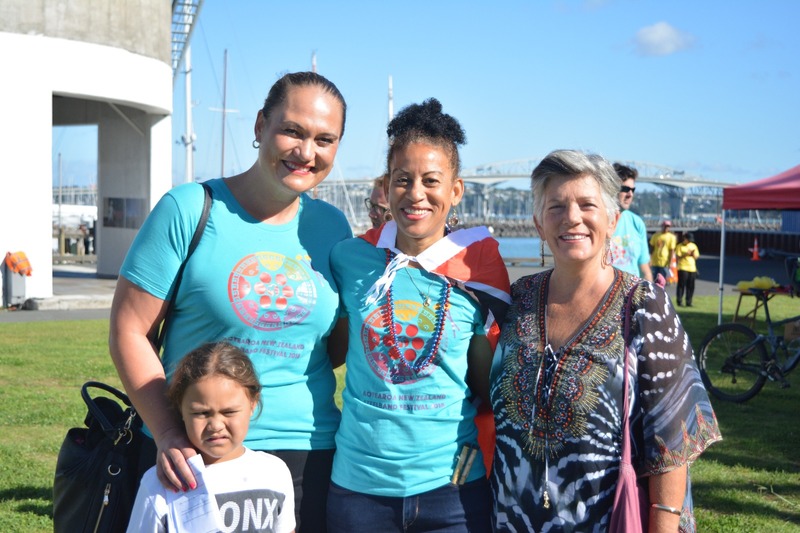 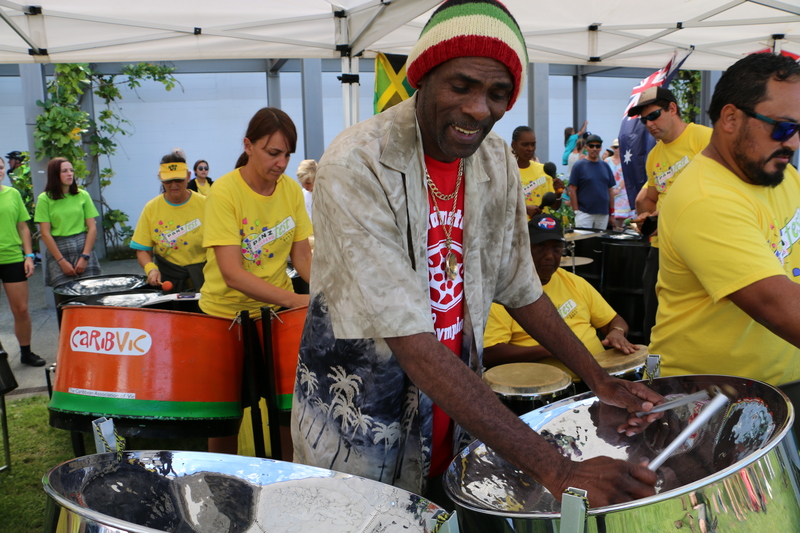 From Trinidad, Lennox Jordan performing pans he has made with the Gold Coast Sun Pans 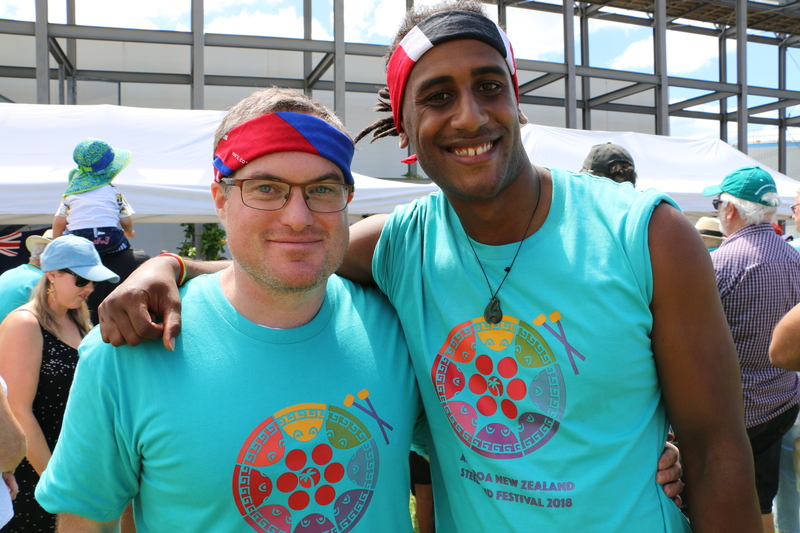 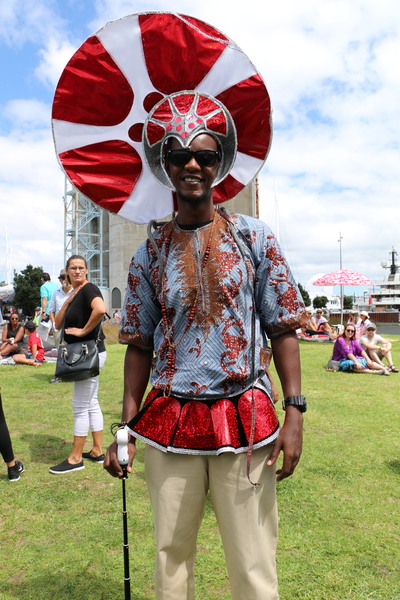 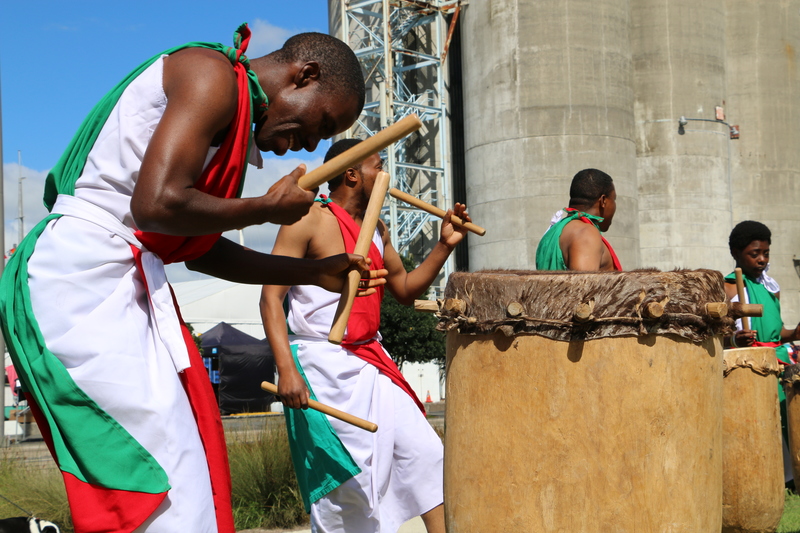 Burundi drummers at the festival 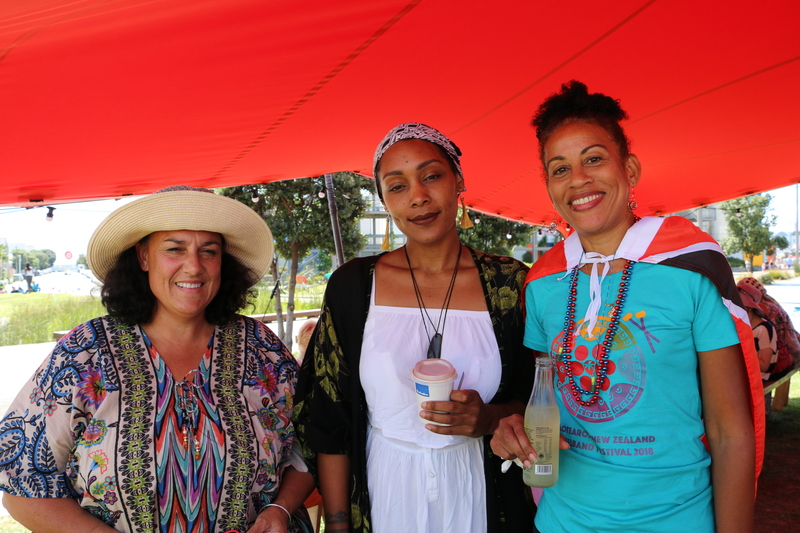 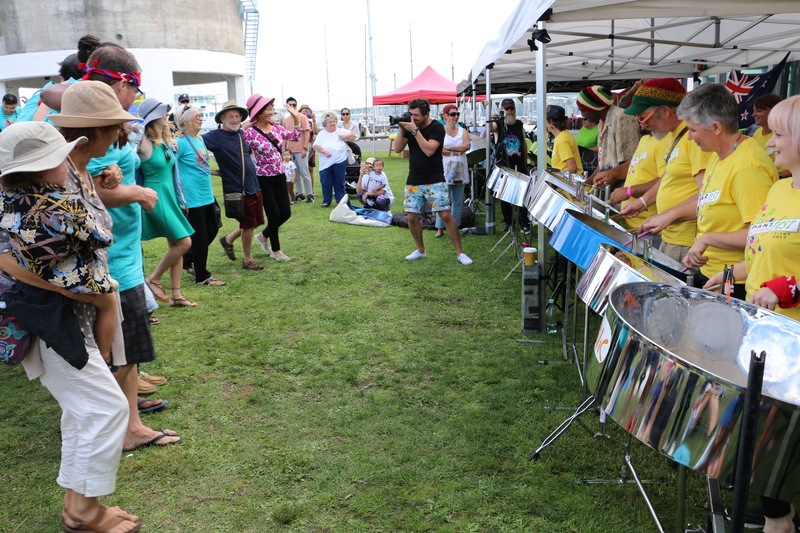 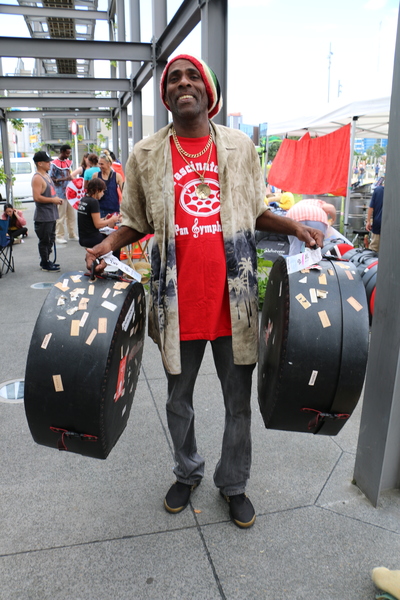 Shortly before kick-off, festival organiser Camille Nakhid is busy delegating, as people set up rows upon rows of steelpan drums. She’s going to perform too, with her group the CaribbeaNZ Southern Stars Orchestra.

Today’s festival will include steelpan and kapahaka, waiata and calypso, and of course reggae.

The music of the Caribbean and the music of Aotearoa create “a beautiful connection”, says festival-goer Cuban Caribbean Ana Fernadez.

“You can see with Māori culture. You can see how our cultures connect back, with the way we do things. Music is an expression of our deep, deep cultural connection.”

Caribbean Islander Bob Marley was an icon for Māori, venerated during their renaissance of the 1970s that saw Māori reclaiming a voice in New Zealand culture and politics. Milestones of the time included the publication of the first novel by Whiti Ihimaera, the establishment of the Waitangi Tribunal and the Land March of 1975, led by Te Rarawa elder Dame Whina Cooper.

Conversely Camille can identify with Māori history. “We know about colonisation, we know about the near decimation of our people,” says Camille, originally from the Island of Trinidad.

Camille’s own people were nearly wiped out by the Spanish in the 1500s. “We had an indigenous peoples, the Caribs. I’m Carib. We still survived.”

Before Spanish colonisation and the slave trade of Africans, the Caribbean Islands had the Taino peoples and the Island Caribs arriving from South America.

“From 40,000 there were only 500 [Carib] people left,” Camille says, “[Look at] the whole history of colonisation, we are indigenous people grounded to the land. The concept of family, communal, sharing. Look at all of us here, we intermarry, we really connect [with Māori].”

This year Camille was awarded a New Year’s honours New Zealand Order of Merit. The associate professor at the Auckland University of Technology has been driven to raise the profile of ethnic communities at local governance levels in Auckland City.

“We come here as migrants, [we] have to acknowledge the Treaty of Waitangi and this is a respect of tangata whenua.”

Camille sees the connections between the political nature of waiata and their vocal music of calypso.

“Waita is just a beautiful sound. I like what it stands for, you do it after a mihi. Our calypso is similar. Just listen to our calypso during Carnival, it’s political. It tells you which politician is corrupt. It’s still a connection with the people and what’s going on, like the waiata.”

The festival is kicked off by the Kapa Haka group from Henderson North Primary School. Their leader, Matua Mark Hiini says that they often perform alongside Auckland’s Caribbean steelpan community. “The only way I can relate it to – it’s the land, the music of the land. There’s a sound that brings people together.”

He sees similar histories too. “Traditionally connections are there. We have all been suppressed in the past but it’s time to speak out, it’s time to share our reo.”

And introducing himself in Te Reo, Camille’s son Alesano Schuster Nakhid is also performing the steelpan. As a New Zealand Carib-Samoan Alesano says it was only fitting he grew up performing. Learning Te Reo is a way for him to keep alive an indigenous language.

“I respect the Māori language, that it’s survived, and that it’s thriving. In Trinidad, Jamaica our indigenous language has died.

For Alesano, language and music is central to culture. “I’m not surprised that reggae is a big thing in Māoridom. We are pretty much the Māori of the Caribbean and the Māori’s are the Caribbean of the Pacific.”

The symbolic colours of the flag of Trinidad and Tobago? “From my recollection, black was the colour of the skin of our people and red was the blood of the land. We’re soul siblings.”

And as if to support his words, Pokarekare Ana rings out, performed by the Southern Stars.

Audience member Kara Beckford is Te Arawa, Māori on her mum’s side and British Jamaican on her dad’s. Born in London, her parents bought her back to the Bay of Plenty to grow up immersed in Māoritanga.

Kara sees the commonality between her own cultures through the protest music of the 1970s that her parents identified with.

“There’s that resistance culture, not wanting to conform to a dominant colonising culture, uprising against that. A lot of black cultures have this in common, certainly Māori and Jamaican.”

Bob Marley protest lyrics appealed to Māori during the 1970s.

“Wairuatanga was important for us Māori. There were a lot of liberation movements happening at the time. As well as the political stuff, I think Bob Marley had that spiritual presence that naturally most indigenous people will tap into.”