'If Shakti wasn't there I would be dead'

"'I am not worthless' - that is what Shakti taught me. It has saved my life; it has saved my son's life. Without it I probably would be dead, another statistic” - Wendy Vyas, Shakti Women’s Refuge. 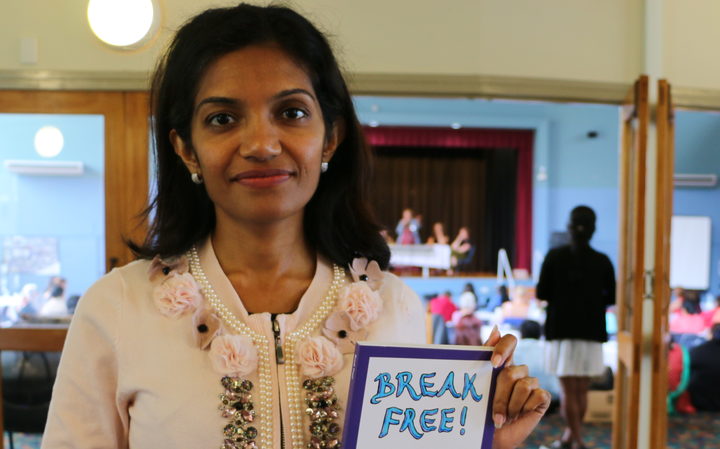 Lynda Chanwai-Earle visits a public meeting in Wellington to hear why it needs to be saved in order to save lives.

Wendy Vyas was pregnant when she discovered her husband was cheating on her.

Highly educated and well-to-do, Wendy had migrated to New Zealand from India in 2009. When she confronted her husband about his infidelity, he reacted violently and continued to abuse her throughout the pregnancy and after the birth of their son.

Wendy sought refuge in a mainstream Women’s Refuge and a protection order was issued. Family and cultural pressure meant that she and her husband were encouraged to reconcile.

“Within 3 months I was brutally assaulted by him and his brother. I was admitted into hospital with severe injuries – pneumothorax, (punctured lung), fractured rib, neck fracture ... my mobile phone was taken away from me."

"If I’d had the services of Shakti at that time, I would not have been where I was."

Since 1995, Shakti Women's Refuge has provided culturally appropriate refuges, support and advocacy services for women survivors of domestic violence and their children. Wendy Vyas is the National Advocacy Coordinator & Funding Officer for Shakti Community Council and is driven to support the very refuge that she feels saved her and her son’s lives.

Shakti’s Wellington Refuge opened in 2014 after the murders of two migrant women, Mei Fan and Sarwan Lata-Singh. Previously there had been no culturally appropriate refuges for Asian, Middle Eastern and African women in the region.

Since then, Shakti has been an essential service for migrant and refugee women in the greater Wellington region. Their Wellington Refuge is currently the only Shakti refuge that does not receive government funding.

In 2016, Shakti was contracted by Ministry of Social Development to conduct a needs analysis. The resulting evidence pointed to a need for specialist refuge services for migrant and refugee women needing intervention and support from family violence.

Shakti Wellington say they have been able to practically evidence the need by providing support to more than 350 women in 2016, with over 200 referrals coming from the Police.

This year, despite this needs analysis, funding for Shakti Wellington Refuge was categorically declined by the Ministry of Social Development. The Refuge needs a minimum of $50,000 per annum in order to operate effectively. 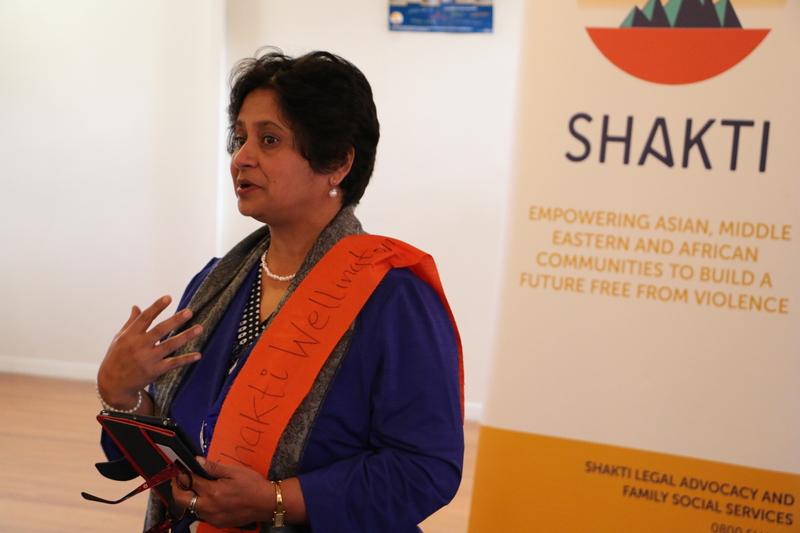 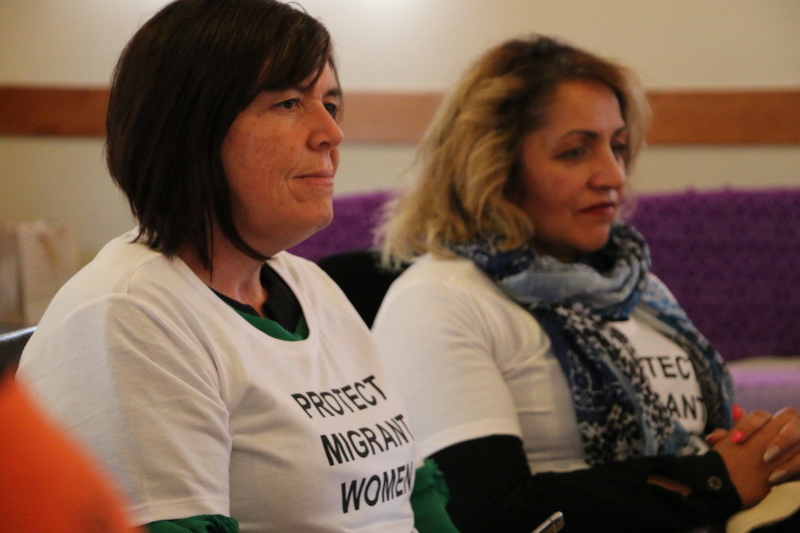 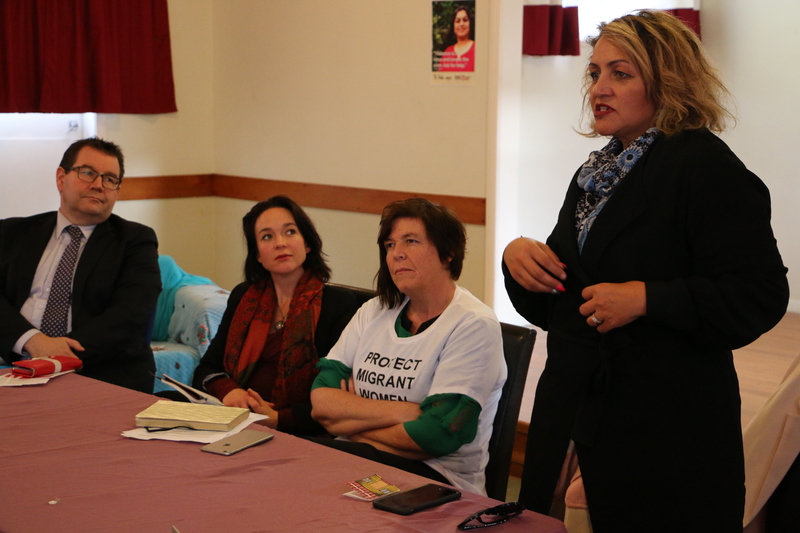 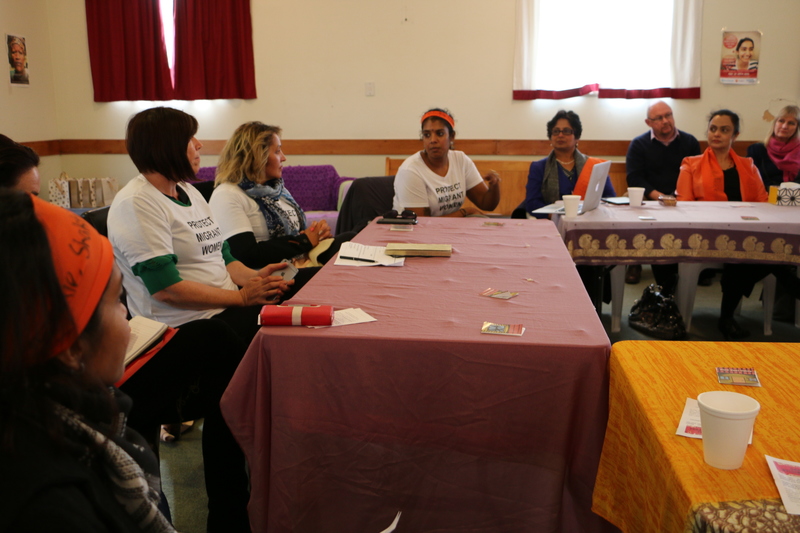 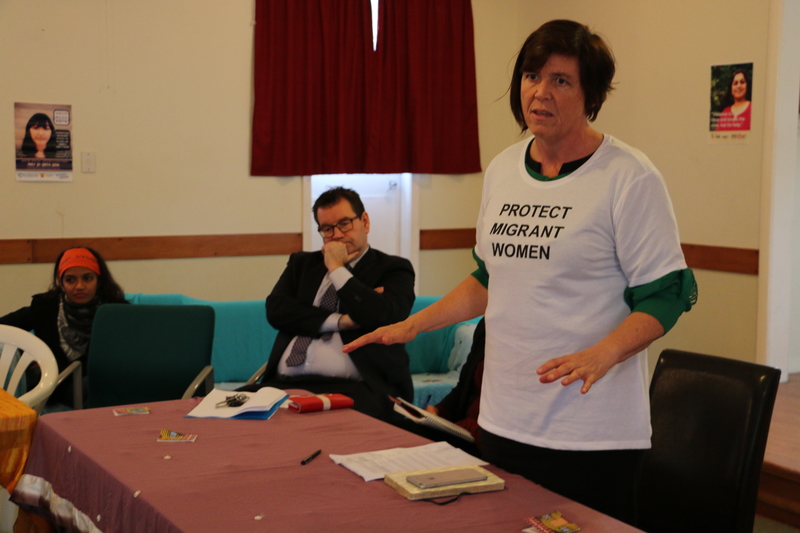 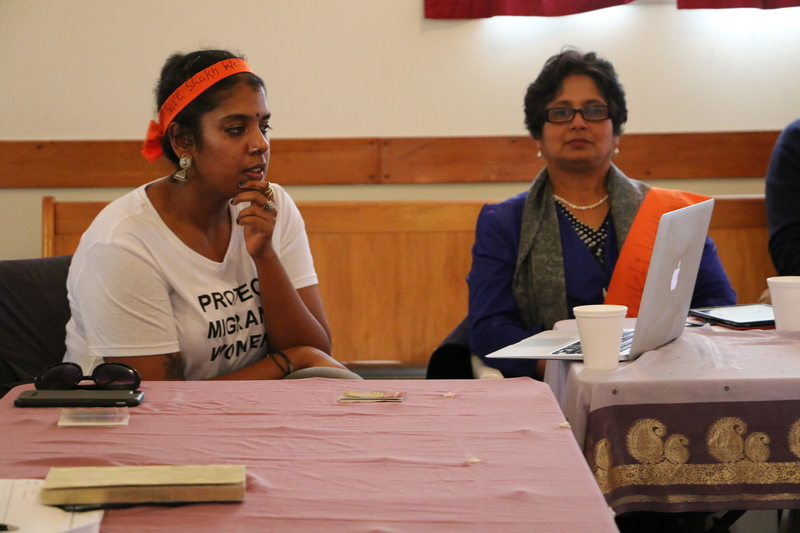 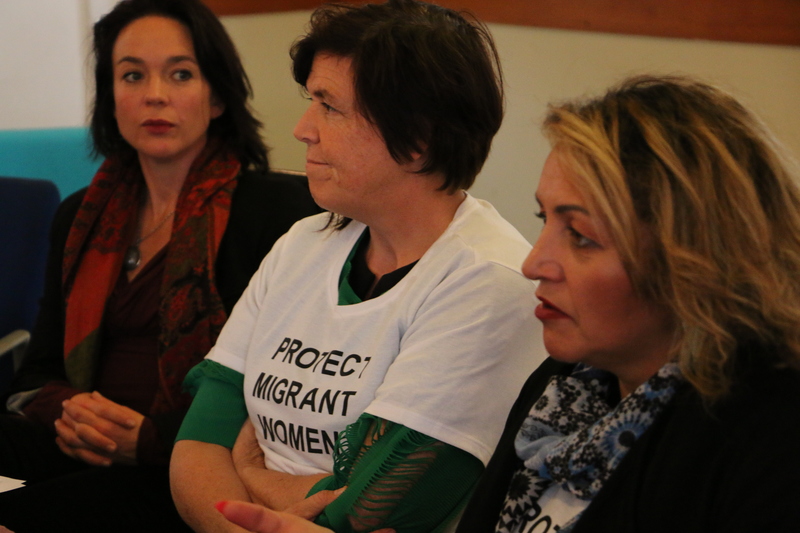 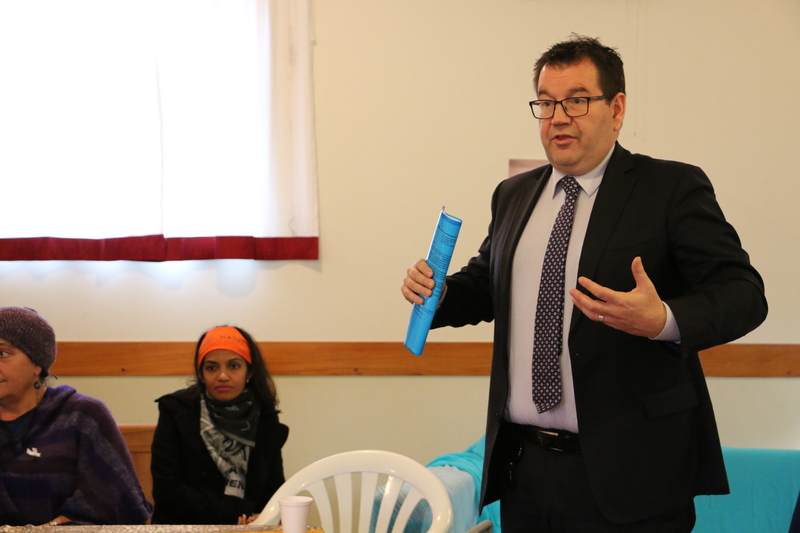 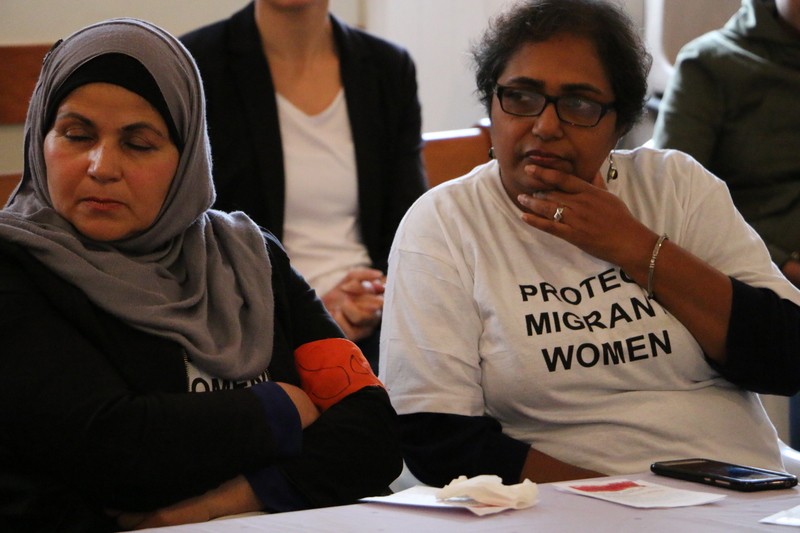 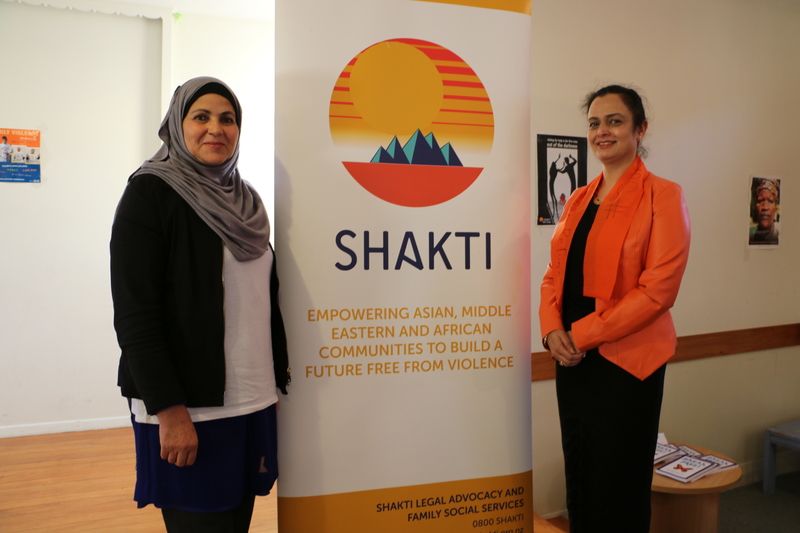 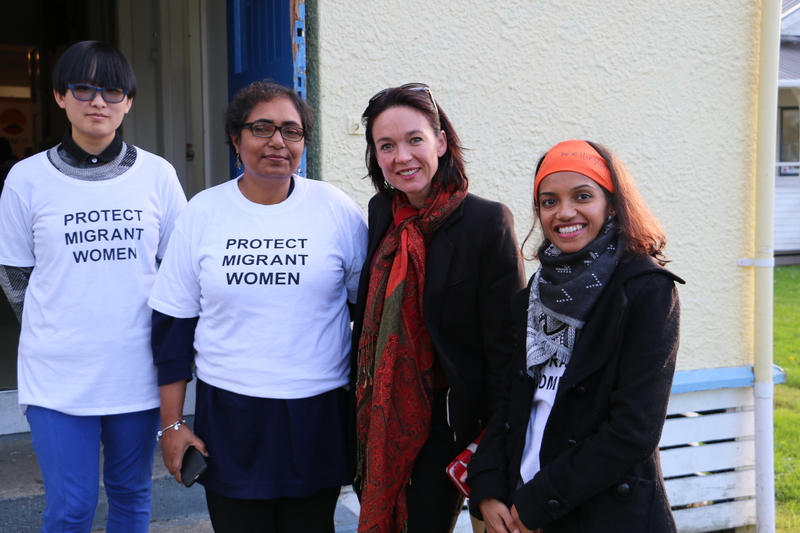 The “Save Shakti Wellington Refuge” public meeting took place on the 24th of May this year at Pomare Community Hall, Lower Hutt.

Survivors like Ms.Vyas spoke first-hand about why the refuge in the capital’s region needed to be saved.

"It is very important to understand the cultural perspective when talking about domestic violence and this is not just physical violence. We’re talking about honour based violence, immigration abuse, forced-underage marriage and FGM practices (Female Genital Mutilation)” - Wendy Vyas, Shakti.

Ms Vyas says Shakti provides six-months of intensive training for their employees and stresses that women working there come from the same cultural background as their clients.

“We understand the world view, we understand when a client says to us “It’s not in my culture,” because we have all been there.”

New Zealand’s rapidly changing demographics means an increase in demand for culturally sensitive services. There is proof already that culturally specific crimes have affected women from our ethnic communities.

“Our campaign to Save Shakti Wellington Women’s Refuge proves that migrant and refugee women’s safety in Aotearoa is not considered a priority for the current government, which has declined funding for the Wellington refuge,” says Ms Vyas.

“The idea that a mainstream women’s service could be the best service for women from Asian, African and Middle Eastern communities, it actually – in practical levels – it’s not true.”

Labour MP Grant Robertson spoke angrily to the refuge not being funded. ”It’s OK to be angry about something that is demonstrably wrong; you are filling a need in the community.”

He says that men need to front up too.

“As a man, the ownership of violence needs to come back to men. Forums like this shouldn’t just about women needing to stand up, men need to be there supporting.”

Government MPs were invited to attend the event, but none showed up.

Voices asked the Ministry of Social Development why it had declined requests for funding. They provided us with this statement from the Ministry for Vulnerable Children, Oranga Tamariki, Regional Manager Iria Pene.

The Ministry of Social Development provides substantial funding for women’s refuges around New Zealand, along with other community initiatives that deal with violence against women and children.

In the year to 30 June 2016, MSD funded $7.34 million for the provision of refuge services nationally for those affected by family or sexual violence, along with funding for other services offered by refuge groups.

Shakti set up a refuge in Upper Hutt about three years ago without funding from the Ministry. Shakti has subsequently made a number of separate funding requests to MSD, most recently in October 2016. Each of these requests has been declined and we have written to Shakti in each case to explain why. Questions about this should be directed to Shakti.

While MSD has never funded the Shakti refuge in Upper Hutt we did provide the national Shakti organisation with $20,000 in one-off funding for 2013-14 as part of a project aimed at understanding the need and demand for refuge services in the Greater Wellington region. This funding was for one year only.

In 2015 the Ministry prepared a Refuge Services Project report (with input from Shakti) which concluded that mainstream refuge services are able to meet the needs of refugee and migrant women.

We continue to work with Shakti and encourage them to work more closely with the National Collective of Independent Women’s Refuges to identify ways in which service provision can be enhanced for all women in the Wellington Region and elsewhere, within the current resource allocation.

If women need help they should contact the National Collective of Independent Women’s Refuges on www.womensrefuge.org.nz. They have a range of refuges in the Wellington area and are an independent, bicultural community organisation.

We respectfully disagree with the response from MSD. We do not know which report MSD is referring to that concluded that mainstream refuges can service ethnic women; however, Shakti's stance has always been that responses to domestic violence must be culturally appropriate.

MSD themselves referred to the other refuge options in Wellington as "bicultural", which means it does not encompass an understanding of cultures outside of Pākehā and Māori. This reflects MSD’s lack of cultural understanding; it alludes to racism and structural discrimination towards not only Shakti but to all the women and children from Asian, Middle Eastern and African cultures who should have a choice of Shakti services.

Shakti would never pretend we have the cultural competency to service Pākehā or Māori women, we would like to see that same understanding and respect for Asian, Middle Eastern and African women experiencing family violence, instead of adding an additional cultural and linguistic barrier to seeking help.

Secondly, we acknowledge the $20,000 funding that MSD provided for a needs analysis for the Wellington region on whether there was a need for a refuge for migrant and refugee women. The analysis concluded that Shakti’s services were imperative for the safety and wellbeing of Asian, African, and Middle Eastern women and their children in the Wellington region. We are extremely disheartened that the conclusion of this report has not been taken seriously by MSD with their continual denial of funding for the Shakti Wellington Refuge. We have done all the paperwork to prove that culturally appropriate refuges are necessary in the greater Wellington Region.