"Progressive developments frighten people, but change is often for the better. This garden could tell the story of all migrants." David Lee, Chinese New Zealander and Wellington City Councillor. 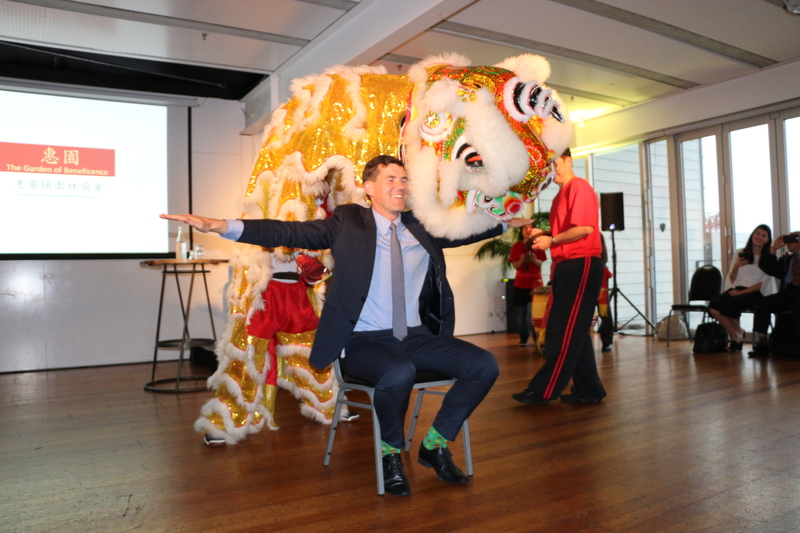 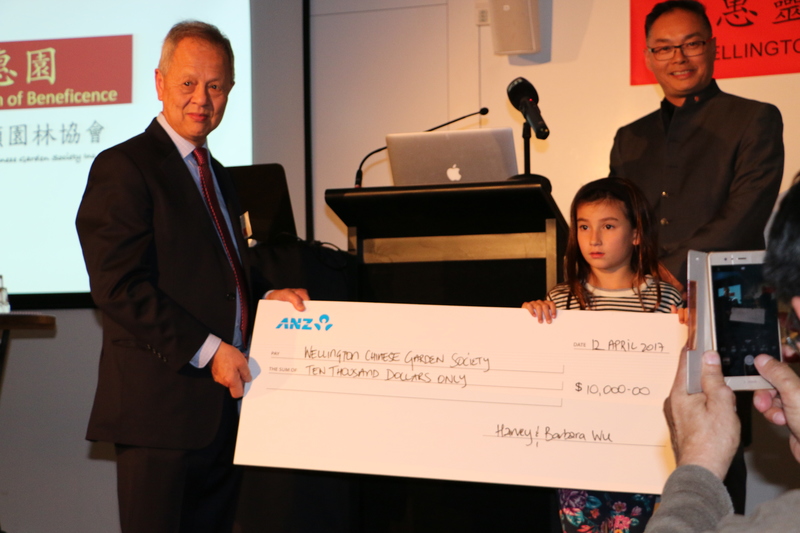 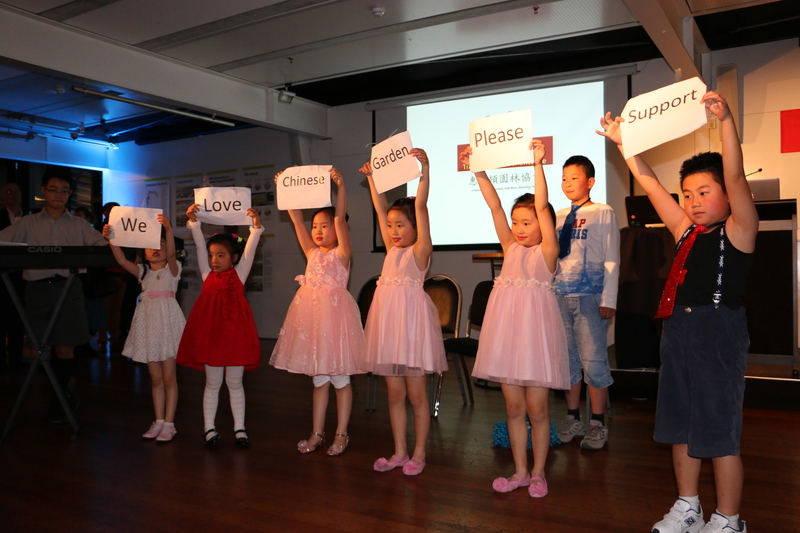 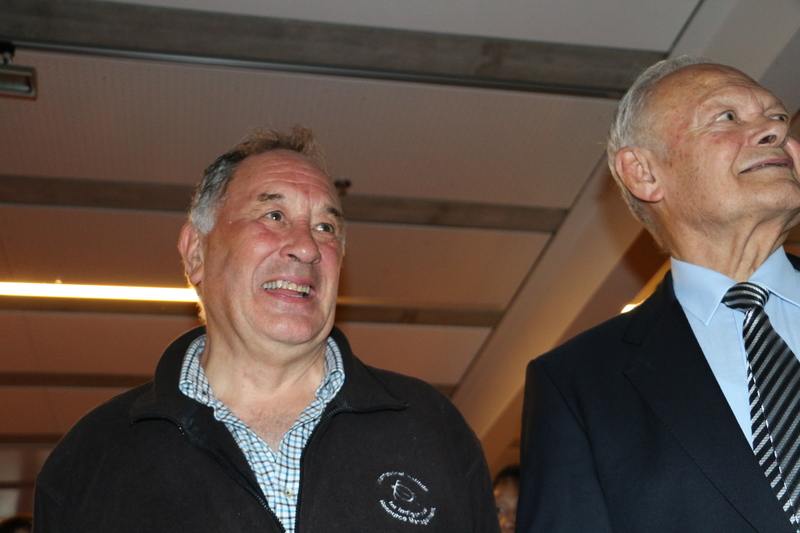 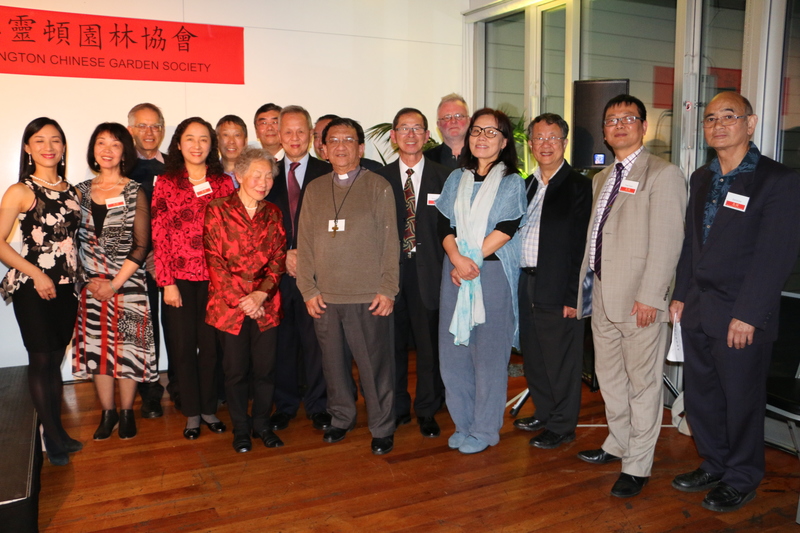 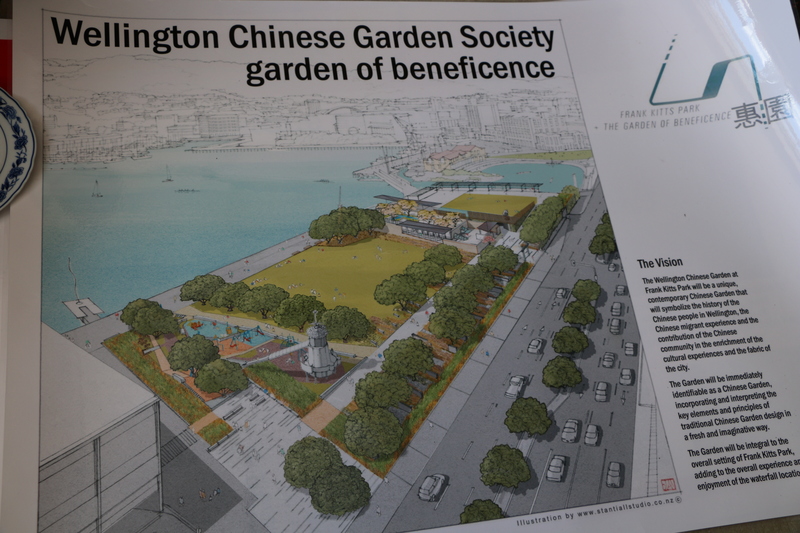 The plans for the proposed overall redevelopment of Frank Kitts Park. 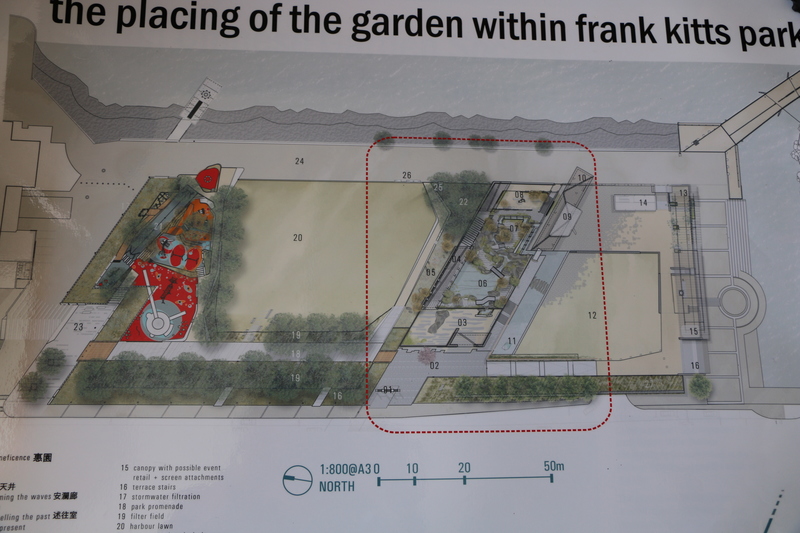 Taking up 1/6th of the space, The Garden of Beneficience. 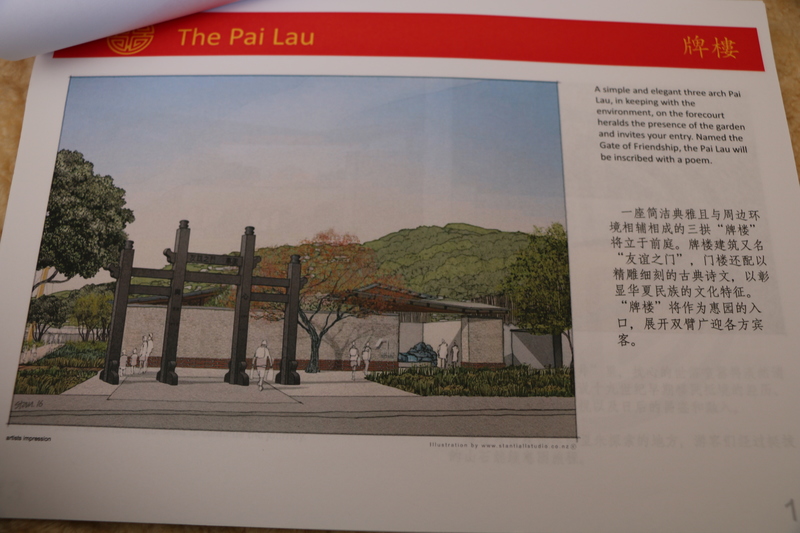 The entrance, the three arch Pai Lau (the Gate of Friendship) off Jervois Quay roadside. 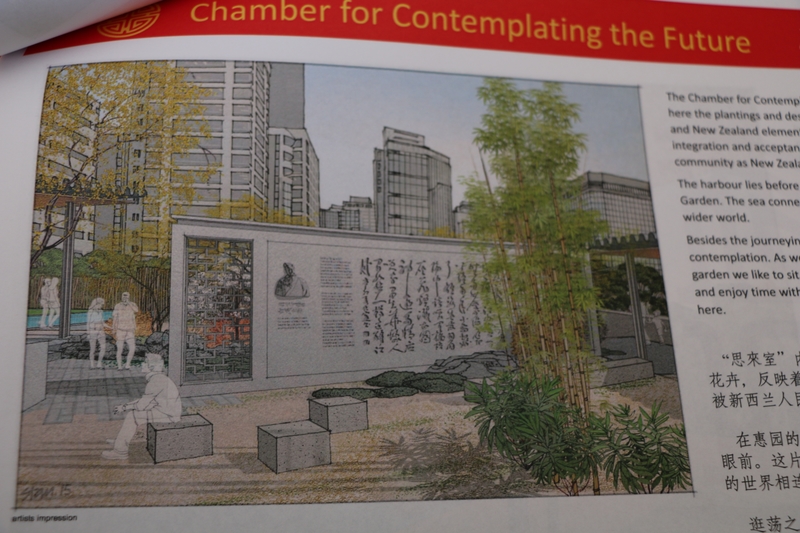 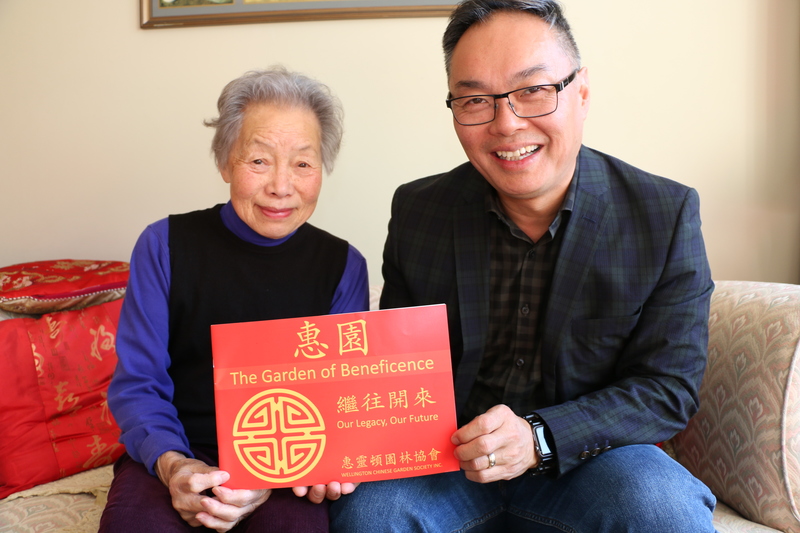 The first Chinese ornamental garden in New Zealand took root on Ohiro Road in Wellington around 1869. Since then, they have flourished in Hastings, Hamilton, Dunedin, Nelson and New Plymouth.  Historian James Beattie writes that “in NZ, elements of ‘Chinese-ness’ and gardens have been closely connected. Chinese history is now an integral part of the NZ landscape.”

But not in Wellington. Battling for more than 20 years, The Wellington Chinese Garden Society has investigated 10 sites across the city before opting to be a part of the Frank Kitts Park re-development project on the city’s waterfront. But now it faces a trip to the Environment Court.

The Garden of Beneficence is likely to cost $6.5 million, a major chunk of the proposed $10.5 million waterfront redevelopment. Funding is coming from Wellington sister city Xiamen as well as major corporates, investors and the Garden Society. The Chinese Garden will take up less than one-sixth of Frank Kitts Park, but is opposed by lobby group Waterfront Watch and a legal fight is in store.

But if you took away the word "Chinese" from the proposed garden, would there still be a problem? Is racism behind the opposition?

Mrs Fung’s Chinese family first arrived in Wellington in 1888. She’s no stranger to unpopular projects; she and her late husband David Fung were pivotal in bringing about the 2002 Labour Government's Poll Tax Apology to New Zealand Chinese descendants.  She says the lack of land in Wellington means the question of where to put the garden is “difficult”.

"Yes. Some years ago the waterfront was being considered, particularly Waitangi Park which was, in those days, a fairly barren piece of land. We were given a site above a car park building [but] the site proved problematic and couldn't go ahead for many reasons.

"Most of the opposition has really arisen to the Frank Kitts Park site. The wish was for us to go back to the Waitangi [site] but that is not feasible now. Besides, do we have another 20 years?"

Wellington City Councillor David Lee has been an urban planner for 20 years. He's also a Chinese New Zealander and a great supporter of a Chinese Garden being built on the waterfront. He remembers opposition to the developments of Cuba Mall and Te Wharewaka o Poneke function centre next to Frank Kitts Lagoon. Both were eventually overcome.

"Our biggest asset for Wellington is between land and sea. The proposed Chinese Garden is a very clever interface between the lower garden and the upper garden. I can see the focus moving to this new green village on the waterfront as our civic centre.”

But fellow councillor Nicola Young labelled the project as “a complete waste of money and an odd place to put a Chinese Garden.” Community group Waterfront Watch argue that the waterfront should be a place of open space for people and their children, a natural environment where native trees, shrubs and flowers should be planted. They fear that the Chinese Garden will create walls in the area and restrict public access. They insist their concern is about the environment, not race. 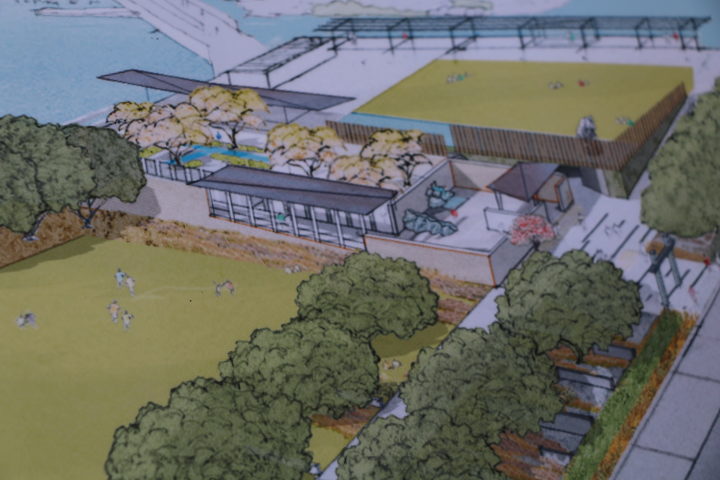 Waterfront Watch took their case to mediation and it is now being appealed to the Environment Court. Victor Davie, President of Waterfront Watch, was invited to be a part of this story but due to the appeal declined to comment. He did, however, insist that racism had nothing to do with the group’s opposition: "Waterfront Watch is appalled that any person or organisation could accuse us of racism. This is not so."

Harvey Wu, Chair of the Chinese Garden Society, says they wanted land close to the community and the public so it would be used.

"There is an appeal against the resource consent decision, the same old grounds, ‘It's a walled garden, it should be somewhere else, Frank Kitts Park shouldn't be redeveloped.’ But…there's misunderstanding around [the walls]. The sides are opened latticed style so you can see through it. It's not walls of a castle."

Mrs Fung says there’s nothing foreign about this garden; she sees it as a gift from generations of New Zealand Chinese to the public and to future generations.

"It's a modernised version of a Chinese Garden, it uses elements of traditional Chinese landscaping but it also combines that with New Zealand elements and New Zealand plantings. It tells a distinct and unique story of New Zealand Chinese." 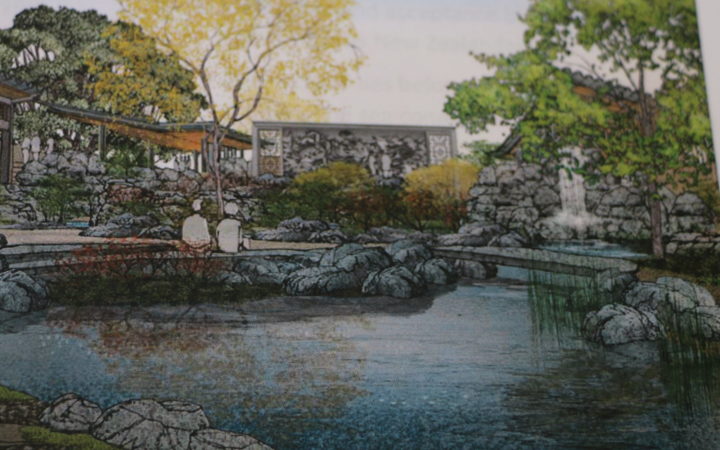 Te Wharewaka o Poneke function centre also faced a lengthy battle to be built on the waterfront. Morris Te Whiti Love – the Chair of the Tenths Trust with tribal affiliations to Te Atiawa, Taranaki, Ngati Ruanui - says local iwi support the Chinese Garden because of over a century of shared history between Maori and Chinese in the region, especially through market gardening.

"The Wharewaka part of this building faces the lagoon and having the Chinese Garden facing the other side is a cultural balance. It was a natural fit. The waterfront is the appropriate place for [diverse] cultural icons.”

Wellington Mayor Justin Lester agrees that it is time to embrace the proposed changes to Frank Kitts Park.

"It will be a tremendous gift from the Chinese community to the city. It's been a decades long project. Assuming it comes through the appeal process this will be a wonderful asset." Justin Lester, Mayor of Wellington.